The IDF is recently putting a lot of effort into propaganda campaigns, and especially new media ones. The army has a blog, a Flickr account, a Facebook page and a Youtube channel; officers from IDF spokesperson unit are very active on social networks, where they argue with journalists and activists and at times even endorse certain (rightwing) political positions.

A recent entry in the IDF Spokesperson blog encouraged readers to help the army “spread the truth” about the military escalation in the south. Another entry was dedicated to a tweet from a Palestinian blogger, which showed a photo of a wounded Palestinian child, allegedly wounded in the attack on Gaza. The photo was old, plus it was photoshopped. The blogger who posted it apologized (she explains the affair here). But the IDF blog concluded (emphasis in original):

This isn’t the first time people have spread false information about the IDF. Meanwhile, lies are still being tweeted throughout the web.

Share this post to fight misinformation–set the facts straight about what’s going on in Israel and Gaza.

So here is my contribution to the important battle against misinformation. A tweet by Ofir Gendelman, a spokesperson for the Israeli Prime Minister’s Office, showing a picture of a mother and two children seeking cover from a rocket attack: 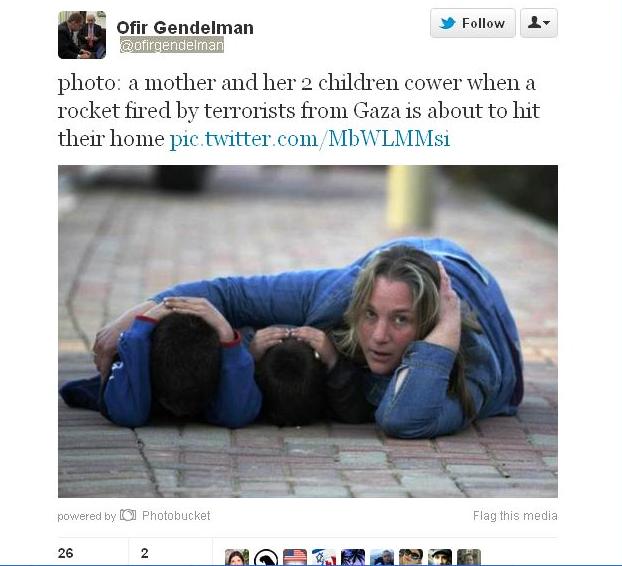 This picture is from 2009. Asked by a journalist why he knowingly posted old pictures without mentioning when they are from, the Prime Minister’s spokesperson replied:

I am not a news agency nor am I a reporter. The photo is genuine and illustrates the tragic condition in the south.

And dead Palestinian kids? No need to go to the archives for those: There is no shortage of photos from recent IAF attacks.