Security forces are targeting Israeli activists and Palestinian shephards in new ways in the South Hebron hills. It’s as if they’d decided to circumvent the whole irksome apparatus of the courts and to resort instead to brute force. It’s much simpler, and maybe more effective. 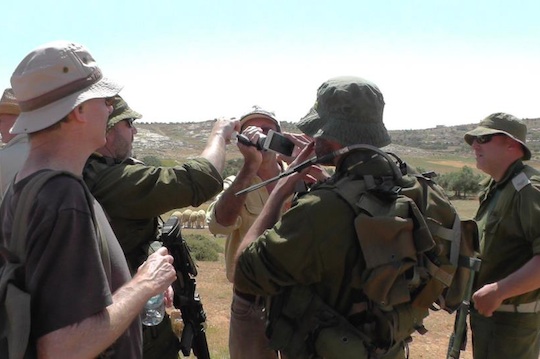 Today we have the New Rules. In some respects they’re rather like the Old Rules. The aim and sole rationale remain the same: dispossession, expulsion, taking more land. The army has, it seems, given up on its favorite device of declaring Closed Military Zones, week after week; perhaps the outright illegality of this practice ended up causing them too many problems in court. Instead, the soldiers simply chase us — Palestinian shepherds, farmers, Israeli activists—physically away, pushing, shoving, threatening, beating. They also have decided they won’t allow us to document their crimes on film; as soon as we start filming, they rush at us and block our cameras with their cell phones. It’s as if they’d decided to circumvent the whole irksome apparatus of the courts and to resort instead to brute force. It’s much simpler, and maybe more effective.

At the same time, there’s been a wave of further annexations. The settlers are paving new roads, which become de facto boundaries, far beyond the settlements’ periphery. Plots of land that the Palestinian owners have worked for some years, or have reclaimed, often with our help, have been declared “in dispute” — which means that settlers have access to them, but the rightful owners don’t. All over South Hebron there are attempts from above and from below to roll back the gains we’ve made in recent years. Probably officers in the Civil Administration have been devising creative schemes. And there have been the usual, routine detentions, harassments, lethal threats, arrests — more, in fact much more, than before. Add to this a wave of pure nit-picking and pestering, for example by handing out tickets to activists, Israeli and Palestinian, for absurd traffic violations; several of our people have recently been fined large amounts for crossing the road while not on a marked pedestrian crossing. Remember we’re talking about the vast open spaces of a desert; the nearest pedestrian crossing is either in Jerusalem or Beersheva, 40 miles away. I myself witnessed the police administering just such a fine the last time I was in the area, some three weeks back.

In short, things are tightening up. Here’s what it looks like on an ordinary day. From Beit ‘Imrah we head down over the terraces to the grazing grounds where the shepherds are clustered with their sheep. An army jeep is waiting for us. A fat, balding officer heaves himself out of it and informs Fadil: “You see this path. It’s the border. You can’t cross it.” The path is an arbitrary line, deep inside the wadi where, in the last months, they’ve been able to graze — after many years during which this wadi was completely out of bounds. We start filming. By now more soldiers, clutching rifles, have clambered out of the jeep. They prod us, driving us over the line and then farther uphill, and they’re jamming our cameras with their cell phones, which they literally thrust in our faces. The commanding officer doesn’t speak again. We protest, we talk of the law, we talk of the crimes he’s committing. He doesn’t reply.

I have one of the cameras, so I get the cell phone procedure over and over, as minutes become an hour, then maybe two hours. It becomes a kind of game. He blocks me, I wave the camera up, down, to the side, looping, looking for a crack or a window where I can film. I manage quite a few short shots, enough, I hope, for the lawyers to use. But he’s at me, pushing at me, taking joy, I think, in blocking and parrying, without words, though I’m talking to him, asking him why he’s so afraid of being filmed and telling him he’ll end up in the Court of Justice at the Hague and so on and so on, and after a while it becomes a dance, like nothing so much as the contact-point improvisation that my wife Eileen has taught me: I take the camera up to the far right, he brings his cell phone down on the lens, I weave circles in the air and he follows me, loop for loop, I hold it down to my waist, switch hands, wave it left or right, over my head, behind my back, and he follows every move in the morose silence his role demands. In the broiling dust of late morning, we move, gyrate, twirl together over rock and thorn.

But it’s not much fun as a game. Today there’s a new tone, menacing and malicious. I think again about wickedness. Since I encounter it so regularly, I’ve developed the rudiments of a theory. I tend to bracket out the pure sadists, who are anyway rather rare, and to focus on those soldiers and policemen who seem to me capable of feeling uneasy or conflicted in the reality in which they are following their orders. For them, I think, like for most of us, the decision is often a subtle one. But today it’s different. The ranking officer and one lower officer are into it. Their faces give them away: cruel, hard-set, disdainful, fully committed to this course. This isn’t cruelty for its own sake, for the sheer pornographic delight it can provide — I’ve occasionally seen that in South Hebron — but something arguably worse, and in no way aberrant. They believe in the necessity of causing hurt, and they do it without hesitation, driving their subordinate soldiers, who are far more innocent and, perhaps, ambivalent, along with them. “An intellectual hatred is the worst,” as Yeats says. But theirs is not only intellectual.

How they rationalize it may not much matter. Later, after a long morning of this chase-and-torment, one of the reserve soldiers tells us: “We have proof that you people pay these Palestinians to provoke us.” That, I suppose, is how he lives with himself. We’re the problem. And in a way it’s true — if we hadn’t been here over months and years, all the lands in the wadi and along the slopes would have been lost forever, as the settlers wanted. We brought the shepherds back. Now they’re here on their lands, and these soldiers are here to cram them back into the little pockets and enclaves they inhabited before. After a while one of the soldiers begins to scream curses, sharp and thin in the desert air. “You Ruiners of Israel, ochrai yisrael, you are aiding the enemies of the Jews, degenerates”—he is waving his gun, threatening us, fingering the clip. [Watch the video here.]

The only thing missing in the whole mad scene is a bona fide madman, and indeed he turns up on cue. He’s from Yata, and his sister lives in Beit ‘Imrah. He’s wearing a thick blue jacket, too hot for today, and the shepherds tell us at once that he’s crazy. He picks up rocks—there’s no dearth of them—and lobs a few at the sheep. He refuses to go away. All we need now is for him to throw a rock at the soldiers, and god knows what will happen. He weaves his way up and down the hill, in and out of the herd, cursing the young boys who are tending the sheep, chanting unintelligible mantras, his eyes bulging, jagged stones cradled in his palms. The shepherds taunt him; he gets more and more angry and voluble. I think he fits right in. “Let him be,” says the fat officer, “hu akhla gever, he’s a fine guy.”

The shepherds are impressive; cool, unintimidated. ‘Abd, in an elegant black shirt, tells me he’s in 10th grade, studying math, physics, Arabic, English. Grades one to ten are all packed together in a single kuttab classroom. After two more years, he wants to study engineering in Hebron or Ramallah or Nablus. He asks me what I do, and I tell him. He likes Indian films and has actually picked up a little Hindi, so for a few minutes, in the midst of everything else, the sheep, soldiers, shepherds, lunatic, all playing their parts to perfection, we chatter in Hindi and Arabic. He’s smart, quick to learn. He needs a computer, and then maybe through his cell phone he could pick up the Internet even out here, in Beit ‘Imrah, strange as that must sound.

As we’re getting ready to leave — the sheep have eaten their fill of thorns — my friend Anas turns up. The last time I was here we had long theological discussions, which included the troubling question of whether turtles can get into Paradise (the answer is yes, in case you’ve forgotten). He says he’s missed seeing me. He’s interested in the little book I am carrying in my front pocket, so I hand it to him, and he flips through the pages. Most of it is in Greek: I tell him there was once, long ago, a great poet called Homer. He hasn’t heard of Homer. On the cover it says: Iliad XXI. He examines it closely and says: “It means Iliad, whoever he is, extra extra large.”

Beneath the bonhomie there is trauma. Anas, 16 years old, was arrested some weeks ago by the Border Police, who took the trouble to hit him with various trumped-up charges. By great good fortune we had video footage that clearly showed the Border Police were lying, but still they held Anas for 30 hours, hand-cuffed, stripped bare, outside in the freezing cold, with no food or water. They wouldn’t let him go to the bathroom. They told him they were going to hold him for 12 months without trial. Finally he saw a judge, who freed him without conditions. But Anas has changed since I last saw him. He has bad dreams at night; they are coming to kill him.

On the way back to Jerusalem, Gabi asks me if I still think there’s some possibility for the two-state solution. I shake my head. Guy, who’s in South Hebron all the time, says, “Yes, of course, that’s what Israel wants. They want the Jewish state here, on the ground, all of it, and the Palestinian state can be somewhere else, maybe on the moon.”

I come back disheartened and weary — exactly what our enemies hope to achieve. Many hours in the thirsty sun, climbing up and down those hills, are nothing compared to the mild agony of dealing with those soldiers. Today’s motto, from Staretz Silouan, the 19th-century mystic, quoted by the incomparable Gillian Rose: “Keep your mind in hell, and despair not.”

David Shulman is a professor at the Hebrew University of Jerusalem and a long-time activist in Ta’ayush, Arab-Jewish Partnership.

Related:
WATCH: IDF soldier screams at Israeli activists: ‘You are worse than the Arabs’