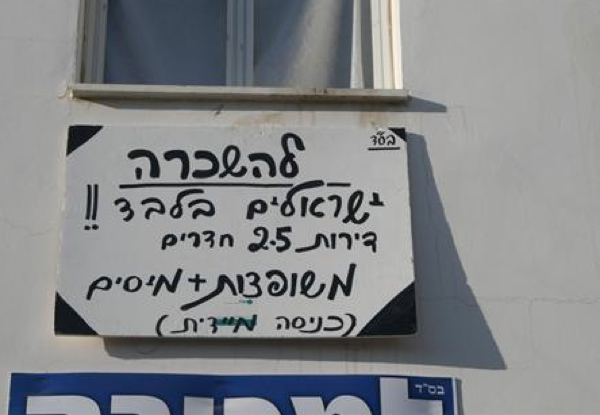 A sign on a south Tel Aviv house, advertising an apartment for rent to Israelis only. (photo: Haggai Mattar)

“For Israelis only.” To the best of my knowledge this sign, photographed on a house in the south Tel Aviv neighborhood of Shapira, sets a precedent.  I have heard several anecdotes about landlords refusing to rent to foreigners; and of course lots of Arabs have had similar experiences all over Tel Aviv. The anti-foreigner sentiment was exacerbated recently when 25 prominent rabbis endorsed a ban on renting to foreign workers and refugees in south Tel Aviv. The rabbis have the support of several city council members from south Tel Aviv.

But there is something different – something new and frightening in the way the sign is posted on the street. Since it appeared sometime in the last month, many people have passed it daily. Foreigners see it; if they understand the Hebrew of course they are hurt. Israelis notice a new wave of racism in the public arena; and when it becomes clear that the house has not been struck by a bolt of lightening and that no disaster has befallen it (heaven forfend), the sign will become normal and acceptable and not even “political” –  as the occupation is, for example. Perhaps others, who previously hesitated to write these words so explicitly, will feel comfortable posting similar signs. Perhaps this will become a trend throughout the neighborhood.

And perhaps not. Perhaps we will see this visual embodiment of racism only this one time, on this house. But even this is one time too many.

Originally published in Hebrew at My Say. Translation by Lisa Goldman.