Settlers are celebrating ‘the first official settlement in 20 years.’ Housing Minister: ‘There are no two states, and there won’t be two states.’ 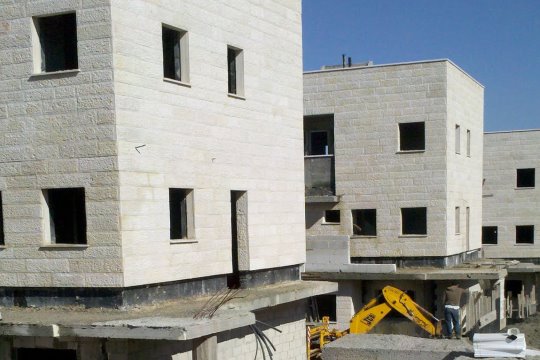 The regional council for Jewish settlements in the northern part of the West Bank (Samaria) celebrated on Sunday the construction of a new settlement called Leshem, located in the western part of the occupied Palestinian territories.

According to a report in Maariv, 72 families have moved into their homes in Leshem, and 70 more are expected to do so in the coming year. The plan is to build around 400 more housing units.

Israel has committed – both in the Oslo Accords and to the Bush administration – not to construct new settlements, so Leshem is considered by the state a neighborhood of the nearby Alei Zahav settlement; however, Leshem is expected to manage its affairs as an independent municipality. The marketing site for Leshem also states that this is a new settlement, and not an extension of Alei Zahav. “Leshem, a new vibrant young settlement in the West of Shomron, is located between new Alei Zahav and Peduel, and a few kilometers from [the settlements of] Beit Arye, Ofarim and Bruchin,” states the site, although the closest community to Leshem is actually the Palestinian village Kufr a-Dik. Visitors are encouraged to choose their lot from an updated zoning plan for the settlement.

The regional council has taken steps to make it clear that Leshem is indeed a new settlement, including the publication of separate contracts and the appointment of a separate settlement secretary.

According to a report on Ynet, the land on which Leshem was constructed was bought, through Israeli middlemen, by a Russian oligarch whose identity remains unknown.

Housing Minister Uri Ariel (Jewish Home) was the guest of honor at the ceremony marking the birth of the new settlement. “There are no two states west of the Jordan River, and there won’t be two states,” said Ariel. “Even if there are negotiations taking place – this is not on the agenda.”