TUNIS — Approximately 200 people gathered Saturday night at the Grand Synagogue in Tunis to pay tribute to Yoav Hattab, the young Tunisian Jew who was killed in the attack on a kosher supermarket in Paris last week. The crowd, which was comprised of different religious groups and nationalities, lit candles in honor of Hattab, sang the Tunisian national anthem and chanted “Viva Tunisia!”

Both local and international media outlets were present at the event, which included renowned academics, Tunisian Jews from across the country and even several foreign embassy employees. The Grand Synagogue is located in Tunis’ Lafayette neighborhood, home to Tunisia’s Jewish community, where Hattab is remembered for attending Shabbat services on a regular basis. His family did not attend the vigil, as they are still mourning in Jerusalem, where Hattab was buried.

One Tunisian Jew paid tribute to those who died defending the Tunisian state – especially the soldiers who were killed by Islamist militants in the Chaambi Mountains near the Algerian border in July 2014. Hattab also died trying to defend hostages during Amedy Coulibaly’s attack on the Hypercacher store in Paris.

“They were were not only martyrs – they should be elevated to the status of saints,” said the man. “Charlie Hebdo cartoonists such as George Wolinski and Elsa Cayat, who died from the terrorist’s bullets, were also Tunisian. Some of the four Jews who died in the kosher market were of Tunisian origin, including Yoav,” he added.

Tsion Cohen, 22, from Djerba attended the vigil to honor Hattab and show support to his family and friends. “We are like a family,” he said, “We wanted to show that Tunisia is the land of all faiths, to show that Tunisians are all brothers – be they Muslims, Jews, Christians or atheists.”

Cohen admitted that although extremists have tried to create divisions between Muslims and Jews in Tunisia, it has not undermined the Jewish community’s feeling of belonging. “I do not think that extremists can become stronger in Tunisia, because the Tunisian flag is what unites us and is above all these divisions,” he said with confidence.

Regarding the controversy surrounding Hattab’s burial in Jersualem, Cohen expressed that he, like most Tunisian Jews, hoped that Hattab would be buried in his home country, and that he does know the reasons behind the decision. “Whether he is buried in Tunisia or Israel, Yoav remains in our heart,” Cohen stressed. 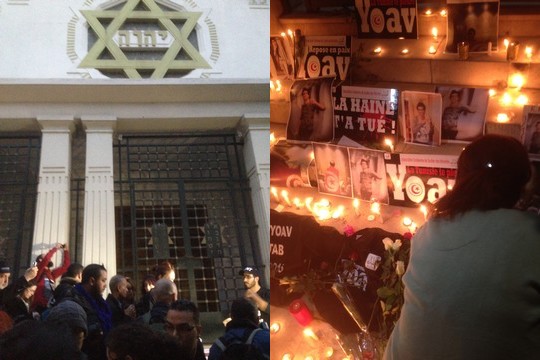 The vigil was organized along with the Tunisian Association for the Support of Minorities, whose president, Yamina Thabet, stressed the fact that Tunisian Jews are part and parcel of Tunisia (the association is also organizing a ceremony in remembrance of Hattab at Hotel Africa on January 18). The mobilization of Tunisian civil society comes in response to the utter failure of the government to commemorate Hattab. Nidaa Tounes, the current ruling party, and specifically President Béji Caid-Essebsi, did not officially condemn the terrorist attack. Only the moderate Islamist Ennahdha party sent its condolences to Hattab’s family, issuing a condemnation of the attack and expressing its grief at the loss of their son.

Those present at the vigil agreed that terrorism is able to strike anyone, making no distinction between people. “Some died because they were Jews – others died because they fought for freedom of expression,” said one of the Tunisian organizers to the crowd, emphasizing that it is incumbent on everyone to condemn any support or sympathy for criminals and their crimes against innocent people. “We are here to pay tribute to those who were killed by hatred,” she added.

This article was first published on Local Call. Read it in Hebrew here.