In second stabbing attack in one day, a young woman is killed, others injured in a West Bank settlement bloc. Attacks come amid police shooting of Palestinian citizen of Israel, deadly vehicular attacks and protests in Jerusalem.

Individual Palestinians carried out two separate stabbing attacks against Israelis on Monday. In the first attack, an 18-year-old from Nablus allegedly stabbed an Israeli soldier outside a south Tel Aviv train station. In the second attack, a Palestinian man reportedly stabbed three Israelis, killing a 25-year-old woman, in the Gush Etzion settlement block outside of Bethlehem in the occupied West Bank.

Following the first attack, which is the fourth such lone-wolf-type attack in recent weeks, Israeli Prime Minister Benjamin Netanyahu addressed the wave of violence and related protests among Palestinian citizens of Israel with an unusually blunt message denying the right to demonstrate. 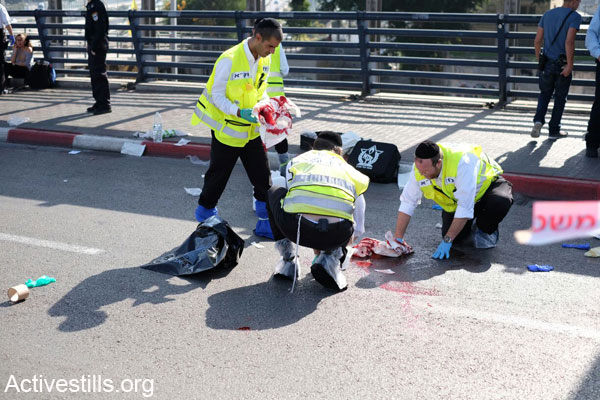 ZAKA volunteers collect blood from the spot where an Israeli soldier was stabbed Monday outside a Tel Aviv train station. (Photo by Yotam Ronen/Activestills.org)

“We will fight against the incitement being lead by the Palestinian Authority, we will act decisively against the rioters who are calling for the destruction of the State of Israel. To all those who demonstrate against Israel and in favor of a Palestinian state, I say something simple: I invite you to move there; we won’t give you any problem,” the prime minister was quoted as saying.

In a statement over the weekend Netanyahu stated his intention to try and revoke the citizenship of demonstrators who call for the destruction of Israel.

In recent weeks, two separate vehicular attacks left four Israelis dead in Jerusalem. Following the second attack, in which the attacker was shot dead at the scene, Public Security Minister Yitzhak Aharonovich effectively gave a green light for security forces to kill suspected perpetrators of such attacks. Two days later, Israeli police killed a young Palestinian citizen of Israel who had attacked their vehicle; in CCTV footage he can be seen fleeing when he is shot. That incident led to widespread protests and a general strike.

Updates will be added here as they come in.

10:00 p.m.:
The soldier who was stabbed in Tel Aviv succumbed to his wounds.