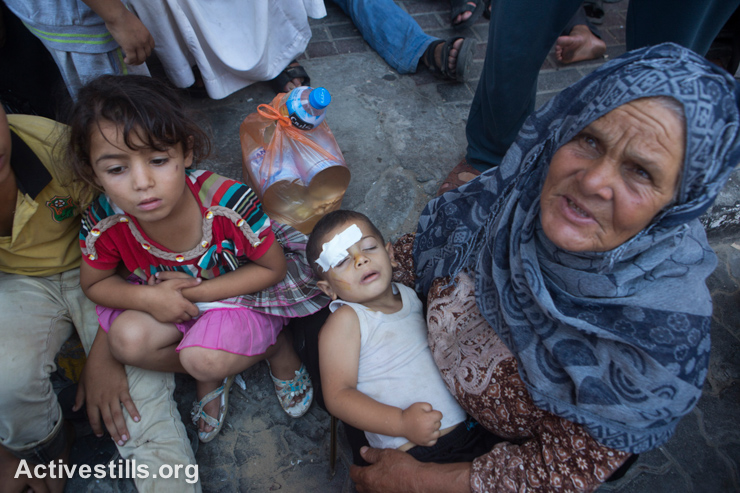 A woman holds an injured child from the city of Khuza’a in a Khan Younis hospital. Residents of Khuza’a found refuge in the hospital after fleeing intensive Israeli bombardments of their village. Many residents were killed or wounded as they fled. (photo: Activestills.org)

There came a point early on during last summer’s Gaza war when it seemed we reached a nadir. Four children, all under the age of 12, were killed by an Israeli naval attack while playing soccer on a beach. The boys were directly struck by two shells, which also seriously wounded four other children.

It was, as we now know, about to get infinitely worse for Gaza’s children. A new report released by Defence for Children International-Palestine (DCIP) documents the consistent targeting of civilians and civilian infrastructure by the Israeli army during the 50-day war. Part of Defence for Children International, an independent NGO, DCIP conducted its research in Gaza between the end of the war and the beginning of 2015, examining the sites of attacks and taking sworn affidavits from victims, eyewitnesses, families and neighbors. The resulting document is a clear-eyed, yet harrowing, picture of the catastrophe that befell Gaza’s children during the course of the war.

The report’s statistics make clear that in an area where 43 percent of the population is under the age of 14, any conflict will have a disproportionate impact on minors. By the end of the war, 547 children had been killed — 535 as a direct result of Israeli attacks. 3,347 were injured, of whom 1,000 were left permanently disabled. 164 children were killed in drone strikes, with evidence collected by DCIP indicating that they were directly struck in several of the attacks.

The massive and disproportionate use of firepower by the Israeli army against civilian targets during the war included strikes on schools, hospitals and refugee camps, with the report concluding that there was no safe place for children in Gaza during the war. They were killed in their homes, on a set of playground swings and taking shelter in schools. 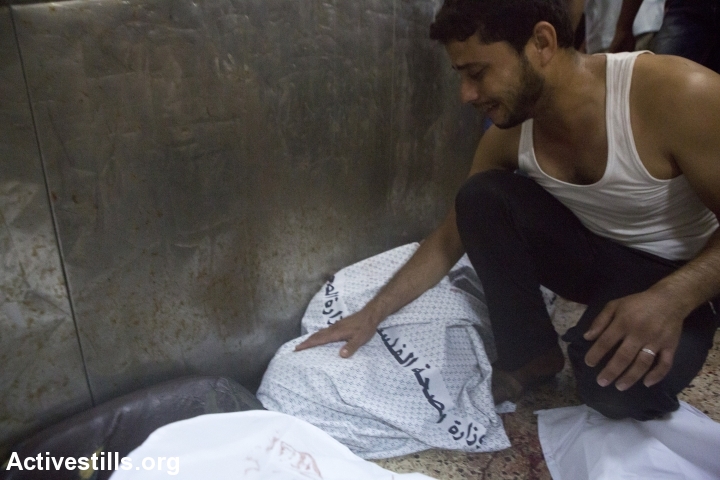 A relative weeps over body of a family member at the Al Shifa hospital as more bodies arrive from the Al-Shejaiya area, July 20, 2014. (Basel Yazouri/Activestills.org)

These incidents repeated themselves consistently throughout the war; as the military’s use of force spiraled out of control (36,000 artillery shells, the ‘Russian Roulette’ of the IDF’s armory, were fired in 50 days), so did the number of dead children. One three-day period saw a child killed every hour. By the end of the war, an average of 11 children had been killed per day. On July 20th, the bloodiest day for children during the conflict (four days after the shelling on the beach) 59 children were killed. Twenty lost their lives during a massive assault on Gaza City’s Shujai’yah neighborhood (which saw 4,800 shells out of the 36,000 fired); another 18 — all from the Abu Jami family, who lost 26 members in total that day — were killed in an airstrike on their home in Khan Younis. Although statistically this was the worst day of the war for minors, the nature of their deaths were standard occurrences throughout the war.

How did Israelis respond to all this violence? A minority protested, certainly, but no widespread crisis of conscience occurred. There is, of course, the argument that the citizens of Israel were not fully aware of the scale of destruction in Gaza; only a fraction of the round-the-clock news broadcasts focused on what was happening “on the other side,” while the Israel Broadcast Authority and the Supreme Court banned a B’Tselem radio advert reading out the names of the children killed in the conflict.

Nonetheless, a week after that day on which 59 children were killed, footage emerged of a crowd of right-wing Israelis chanting at a pro-war demonstration in Tel Aviv: “Tomorrow there’s no school in Gaza, they don’t have any children left.” Somehow, they knew exactly what the army was doing in Gaza. And even if there was a majority in Israel that remained silent between its own fear and apathy, it is difficult not to recall the words of IDF Lt.-Col. Dov Yermiya, who during the 1982 Lebanon War decried “[t]his arrogant, cruel nation that dances at the edge of destruction.” 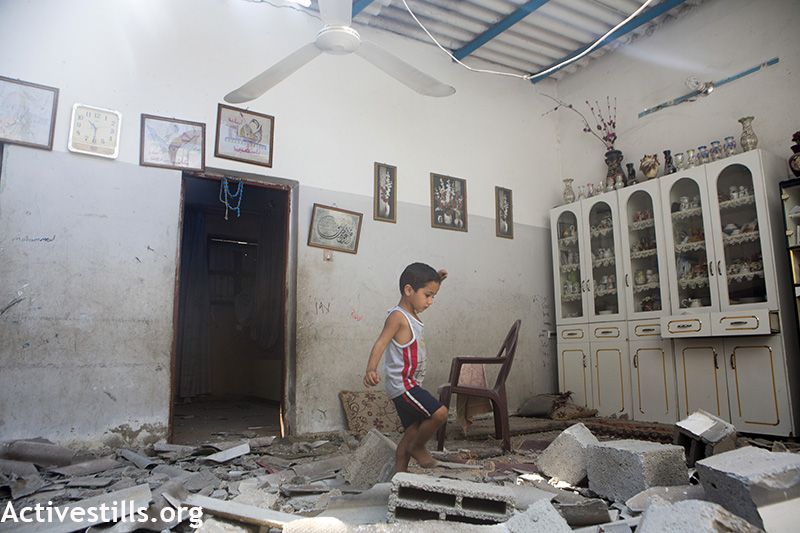 A child walks amidst the rubble of his Gaza home, which had been destroyed the night before by the Israeli army. (photo: Anne Paq/Activestills)

For now, though, the silence has spread — a silence that Israeli society chooses to preserve. It will stay that way until the findings of the UN Independent Commission of Inquiry on the 2014 Gaza Conflict are revealed at the Human Rights Council in June. At that point, Israelis will most likely feel the urge to speak up and defend our actions in the Gaza Strip, and raise again the impossibility of living under rocket attacks (the ramifications of which indeed should never be underestimated or dismissed). And in Gaza, the silence will soundlessly speak to the impossibility of living.