The time: Somewhere between sunrise and the first pangs of lunchtime hunger.

The place: Tel Aviv and A-Nabi Salah – so near and so far.

For the first time, we marched together in a festival of democracy and human rights that occupied the streets of the big city, reverberating in every direction. On the same day, the residents of A-Nabi Salah also attempted to march for the first time to protest the seizure of their land by settlers.

We were successful, and we have continued to march since then.

They were unsuccessful, but they keep on trying.

Muhammad ‘Amira is a human rights activist and a member of the Popular Committee in the Palestinian village of Ni’lin in the Ramallah district. On June 15, 2011, Muhammad was arrested during a demonstration in the village of Dir Qadis to protest the paving of a new road designed to serve a new development in the adjacent settlement of Nili.

During the demonstration, Muhammad sat on the ground, in front of a Civil Administration tractor that was plowing up land belonging to the residents of the village, which is surrounded on one side by the settlement of Nili, and on the other remaining sides by the Separation Barrier. He shouted slogans against the occupation and protested the usurpation of Palestinian land.

Muhammad was brought before a judge for the first time on June 19, 2011, and his detention was extended for three days at the prosecution’s request. Muhammad was ultimately released after six days’ detention in exchange for NIS 3,000 bail, and an undertaking on his part not to return to Dir Qadis until the completion of the proceedings against him.

The indictment filed against Muhammad accuses him of incitement and disturbing a soldier in the performance of his duty.

Today, Wednesday, a further hearing was due to be held in Muhammad’s trial at Ofer Military Court. The hearing has been postponed pending further notice.

Bassem Tamimi is the head of the Popular Committee in the village of A-Nabi Salah in the Ramallah district. He is one of the organizers of village’s weekly demonstrations, and a leading proponent of the non-violent campaign against the occupation in the West Bank.

Bassem, who is the same age as the Israeli occupation, has been arrested 11 times by Israeli security forces, and spent approximately three years in administrative detention. He was eventually released without being convicted of a single offense (or even charged).

Since the beginning of the demonstrations in A-Nabi Salah, Bassem and his family have been treated particularly harshly by the Israeli authorities. Soldiers have raided the family home countless times. Bassem’s wife, Nariman, an activist in the popular struggle whose speech will be read out at this year’s Human Rights March, has been arrested three times. Two of their sons were injured during violent dispersal of demonstrations. Immediately after the demonstrations began in the village, the Civil Administration issued demolition orders against 10 buildings situated in Area C, on the pretext that the buildings are illegal. One of these buildings is Bassem’s home. 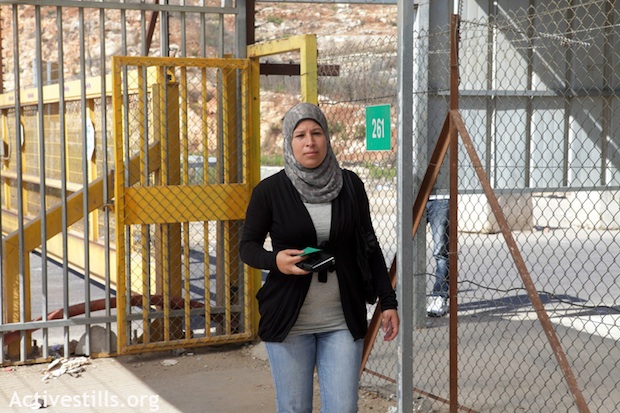 On April 17, 2011, Bassem was indicted on offenses of incitement, organizing and participating in an unauthorized procession, soliciting others to throw stones, disrupting legal proceedings, and failing to obey an order to attend a police investigation. Bassem denied the charges. He was detained pending completion of the proceedings and has been held for some nine months.

The main evidence against Bassem is the testimony of a minor from the village of A-Nabi Salah who has also been indicted, and whose trial is being conducted alongside that of Bassem. The youth was interrogated after spending a night in detention and being deprived of sleep. He was not informed that he was entitled to remain silent or to consult with an attorney, and he was questioned by four interrogators, three of whom are not authorized to question youths.

Today, Wednesday, a further hearing was due to be held in Bassem’s trial at Ofer Military Court. The hearing has been postponed pending further notice.

Who will march on Friday?

The court files labeled “Muhammad ‘Amira” and “Bassem Tamimi” are living examples of the numerous obstacles facing activists against the occupation, and facing the popular Palestinian struggle in general. They highlight the absurd nature of military orders that prohibit almost all demonstrations in the Territories, except with special permission from the military commander – the same commander who, for the Palestinians, symbolizes the illegal presence of the occupying force. They reveal the extensive powers and discretion granted to junior soldiers in the field to use violent means to disperse demonstrations. They attest to the violation of the rights of minors and adults alike in the criminal process – in detention, in interrogation and in the military courts. Muhammad and Bassem are examples of the power of oppression Israel uses against freedom of expression in the occupied Palestinian territories.

Muhammad and Bassem are not just two individuals. They represent many others: Ashraf and ‘Abdullah and Khaled and Nariman and Manal and Bushra and ‘Issa and Iyad and Ahmad and Bilal…. and all the other Palestinians struggling against the protracted occupation. Muhammad and Bassem tell the stories of A-Nabi Salah, Ni’lin, Bil’in, Walajeh and Al-Ma’asara. They shout out the pain of Beit Ummar, Susiya, A-Tawaneh and the South Hebron Hills. They raise the banners of Dir Qadis and Kusra, of Silwan and Sheikh Jarrah. They are the voice that opposes roads open to Israelis only; that fights against closed checkpoints and blocked roads. They are the voice that demands equality, justice and fairness. Muhammad and Bassem are my voice too, and I want it present at this week’s Human Rights March.

And this is why:

On Friday, I will make my voice heard for their right to make their voices heard.

On Friday, I will march for their right to freedom of movement, expression and protest.

Hearings were due to be held today in the trials of Bassem and Muhammad. On Friday, I will march for their right to due process.

On Friday, I will demand their rights, my rights, and our responsibility to end the occupation and remove the regime of separation and discrimination.

If you haven’t got the message yet – I’m going to the march on Friday with a bag of my own reasons and messages.

Raghad Jaraisy is an attorney at the Association for Civil Rights in Israel (ACRI), where she specializes on issues relating to the right to protest and freedom of expression in the