Israeli authorities aren’t merely incompetent when it comes to defending the rights of Palestinians in Area C – they are part and parcel of a process dedicated to the area’s annexation. 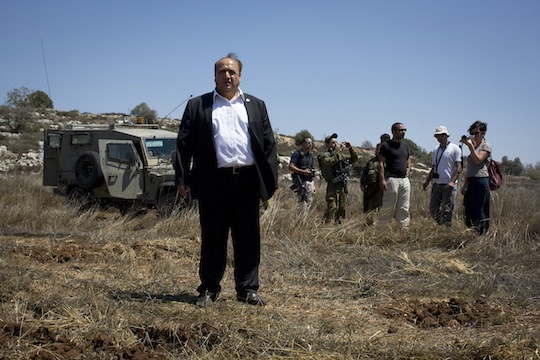 Last week, IDF forces removed, with hardly any noise, settlers from the lands of Muhammad Ibrahim ‘Ali Shabana, a resident of the village of Sinjil in the West Bank. The removal took place after the invasion by settlers Yonathan Rothschild and Yehuda Elitzur. Thus ended a long legal saga which proves, yet again, the incompetence of the Israeli authorities when it comes to defending the rights of Palestinians in Area C.

The story begins in 2003, at the height of the Second Intifada. Suicide bombers blow up in the streets of Israel without the IDF or the Shin Bet being able to stop them. At the same time, the IDF kills thousands of Palestinians. And the settlers, with close government support, use the media smoke screen provided by the greatest bloodletting in the Israeli-Palestinian conflict since 1948 to erect a series of outposts. One of these is Givat Ha’Roeh, situated partly on the private Palestinian lands of the villagers of Sinjil.

Here events follow a familiar path: In 2004, the military commander issues a demarcation order for the area of the outpost but, lo and behold, fails to enforce its own edict. A Demarcation Order, a means to deal with the evacuation of unauthorized outposts by demarcating and forbidding entry into the area, is yet another tool the army uses very rarely (less than a dozen have been issued).

As a result of the lack of enforcement, the outpost – like many others – rapidly grows at the expense of more illegally-grabbed Palestinian land, with the authorities looking the other way. In 2006, a first petition demanding the enforcement of the demarcation order is tabled. The state, lying as usual, promises the court that it will enforce the order, and so the petition is dismissed. The order is – surprise! – not enforced, and a year later, in 2007, a new petition is filed. This time the state openly declares it has no intention of enforcing the orders, citing political considerations.

In the beginning of February 2010, the victim, Shabana, finds out that settlers have invaded his lands, planted trees and fenced off the area. He lodges a complaint with the police. The latter, as per procedure, close the case, citing the “perpetrator unknown” clause. Ten leisurely months pass with no action, and in December 2010, Yesh Din files its only High Court petition in the case (the earlier petitions were filed by Peace Now) on behalf of Shabana. The organization asked for the enforcement of the order concerning Disruptive Use of Land issued against the land theft.

What is an order concerning the Disruptive Use of Land? Herein lies a story: In 2005, Attorney Talia Sasson presented her report about illegal outposts to the government, which endorsed it. The report was commissioned by Prime Minister Sharon, who promised the Americans that the government would remove these outposts. Sasson wrote some very sharp words about the abuse of rights by the settlers and the government:

It seems, therefore, that breaking the law has become institutionalized. We are not dealing with a felon or a group of felons acting illegally. The picture is that of gross violation of the law by certain government authorities, public authorities, local councils in the Judea and Samaria Region and the settlers, all done while presenting a façade of a regular institutional system acting legally.

Sasson reached the conclusion that the existing legal tools do not provide the Palestinians with proper protection:

This purpose of getting a hold on the land is achieved by tilling, planting, sowing, shepherding, physically seizing the land, fencing, preventing access, building roads, erecting street lights and construction, taking over caves, and various other ways. When the private Palestinian lands are seized by settlers, it turns out the legal defenses open to them are ineffective […] Actually, those defenses are left a dead letter in the security acts. They do not provide protection to Palestinians from illegal invasions by Israelis of their lands, neither by civil law, nor by criminal or administrative law […] (emphasis mine, Y.G.)

As a result, Sasson decided that there is a need for a new legal tool – the Order Concerning the Disruptive Use of Land – that would allow for a quick removal of invaders without the usual legal process, which takes many years.

The order is issued under the authority of one of the senior collaborators with the settlers, the Head of the Civil Administration (HCA). The bearers of this office are understandably unenthusiastic about it, as it may actually force them to act. (The undersigned served in the Civil Administration and, some 20 odd years ago, drafted the set of rules for a Civil Administration officer. Most of them were a variation of the first rule: “Do nothing. Anything you do is liable to get you in trouble with someone.”)

The HCA who entered office in 2010, Colonel Motti Almoz, decided he would simply not issue orders concerning the Disruptive Use of Land, using the excuse that he lacked the legal training to do so. The legal counsel to the Civil Administration, Brig. Gen. Eli Bar-On, sent him a sharply worded letter, saying, inter alia, that not issuing the Orders is “abdicating your duties resulting from the demands of international law and is not in compliance with the behavior expected from a reasonable administrative authority.” And yet, the Administration rarely issues the order. The settlers, as can be assumed, hated the order, and the Edmond Levy Report attacked their use, claiming they were illegal. Even so, in March 2012 the High Court of Justice ruled the orders to be legitimate.

But are they useful? The Shabana petition, as mentioned above, was tabled in December 2010, after the usual waste of time lasting ten months; in March 2011, the government pledged to enforce the Disruptive Use of Land order, sometime in the future; in May 2011, it gave a deadline – August 31st, 2011. This did not happen. In the beginning of September 2011, the government claimed there was an error in the order. The process went on and on, and on April 9th, 2013 – seven years after the first petition in the case, and some 20 months after the date the state was supposed to remove the invasion – the High Court of Justice lost patience and issued an order nisi. Four months later, last week, the government actually enforced it.

The sad conclusion from the Shabana case is that, again, you can bring the horse to the water, but you can’t make him drink; you can give the state the most powerful legal tools, but since it is a collaborator in the process of annexation (with the annexation of Area C being its apparent goal) you can’t force it to use them. The logic of annexation is stronger, as it always is, than the rule of law.

Update: A Yesh Din team, including attorneys Anu Luski and Muhammad Shaqir, accompanied by Yesh Din volunteers and the son of petitioner Shabana – Attorney Hussein Shabana, Chairman of the Palestinian Legal Bar Association – made it on Sunday to the plot of land. A short while after their arrival, of which they were informed in advance through the Palestinian District Coordination Office, settlers reached the place. They were led by someone who presented himself as Nachman, the security officer of the settlement of Eli, and they had two vehicles with them. The settlers tried to disrupt the Palestinians as they were plowing the land, and one of their vehicles tried to block the tractor. Nachman claimed the Palestinians had to coordinate their work in advance, and Attorney Luski reminded him that the court decided otherwise.

IDF troops reached the place, and carried out Nachman’s orders. Later, an officer reached the place and presented the Palestinians with a Closed Military Zone Order. At about the same time, a settler reached the place – the soldiers told the Yesh Din group that she came from the outpost, where she is one of the few residents – and began cursing and threatening them. Happily, despite everything, the plot was fully plowed. Yesh Din will continue updating.

Written by Yossi Gurvitz in his capacity as a blogger for Yesh Din, Volunteers for Human Rights.