A mass rally in support of Sgt. Elor Azaria, who was filmed shooting a wounded Palestinian, has stirred a heated debate on social media about the future of the rule of law and the status of the IDF. But nobody wondered how the Palestinians should be factored in. 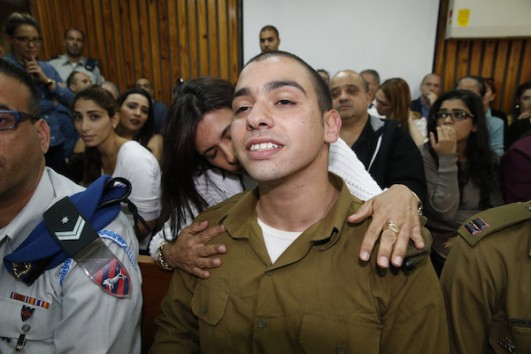 The Israeli soldier who was caught on camera shooting a wounded Palestinian knifeman has been indicted for manslaughter, the military prosecution said on Monday.

Meanwhile, a mini brouhaha erupted over a solidarity concert for the soldier, who following the indictment can be named as Sergeant Elor Azaria, that is scheduled to take place at Tel Aviv’s Rabin square on Tuesday.

The rally comes in the wake of massive support Azaria received from right-wing circles, who see him as a hero who confronted a terrorist (the fact that the Palestinian man, 21-year-old Abdel Fatah Sharif, lay severely wounded and posed no risk was apparently immaterial to them). They say that he is being scapegoated by the IDF bigwigs who are eager to clear their conscience at his expense.

Among the billed artists were initially David D’Or, whose claim to fame, ironically, was a joint tour with the Lebanese singer Lubna Salame, and the incredibly popular Eyal Golan, who was recently embroiled in a large-scale statutory rape scandal, involving dozens of teenagers, and escaped by the skin of his teeth. They have both succumbed to public pressure and cancelled their participation, but the controversy has yet to subside.

Most people lamented the decline of Israeli democracy, the eternal Titanic that keeps on sinking, which the direct affront to the rule of law that an overt support for a murderer represents.

But some, interestingly, thought that siding with the soldier in his campaign against the army was a welcome jab at the military juggernaut. These people, who don’t exactly position themselves in the far-right fringes of the Israeli discourse, said that if they were to choose between Azaria and the army, they’d opt for the former, in protest of the army’s penchant to scapegoat junior soldiers in order to allow the higher-ups get away with it.

There is, of course, more than an element of truth in what they say. The army’s decision-makers need scapegoats like Azaria to convince themselves that they are morally superior to any other army in the universe. But this sort of debate is entirely domestic: Only Jews can choose which side they’re on. Only in this intra-Jewish context they can be pitted against each other.

But if one is to take the Palestinian point of view into account, the line isn’t drawn between the soldier and the officer, but between a community suffering from the whims and injustices of the occupation and the army that carries out that policy, in which both soldiers and officers take part in equal measure.

Looking at the issue like that, it becomes clear on which side decent people should take.