A woman from Gaza is told during a visit to Israel that she must terminate her advanced pregnancy. The Israeli army and courts effectively refuse to allow her to mourn with her husband by her side. 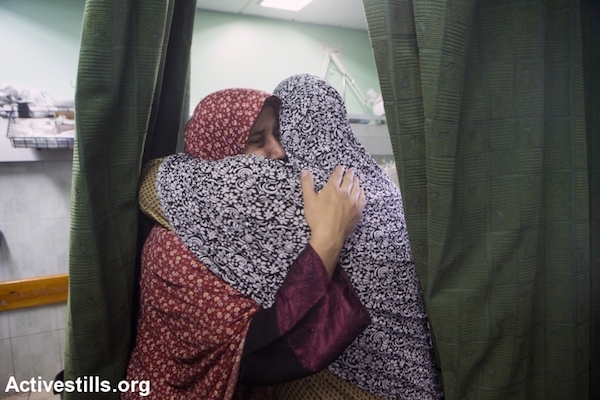 Illustrative photo of a woman in mourning. (Anne Paq/Activestills.org)

Over the last two weeks, while everyone in Israel was talking about the segregation between Palestinian and Jewish women in post-natal care, we here at Gisha (an organization that promotes the freedom of movement of Gaza residents) provided legal assistance to one pregnant woman, who just happens to be Palestinian and could not care less who was lying next to her, where that woman was from or what sort of partying her hospital room mates would be doing. These privileges were the last thing on her mind. She wanted one thing and one thing only – which to us seems self-evident – she wanted to hold her spouse’s hand while the doctors induced her fetus’ demise.

The woman in question entered Israel from Gaza, with a permit, to visit family. She was in week 28 of her pregnancy. Because health care services in Israel are more advanced than in Gaza, she went to get a second opinion about her pregnancy while in the country – something any of us wold do when it comes to a major medical decision. The doctors recommended an abortion immediately due to fetal defects. An abortion this far into the pregnancy is, in fact, a birth, performed as a C-section, at the end of which the fetus is injected with a substance that stops its heart.

Due to the urgency, we contacted the Israeli military unit in charge of issuing permits to exit Gaza, the DCO, on that same day, a Wednesday, asking them to let the woman’s spouse enter Israel immediately, to be by her side during these difficult moments. We knew he was under some vague security exclusion, barring him from entering Israel but the details were never explained and he never had a chance to counter whatever it was. We thought that the situation was humanitarian enough that he would be allowed to enter. 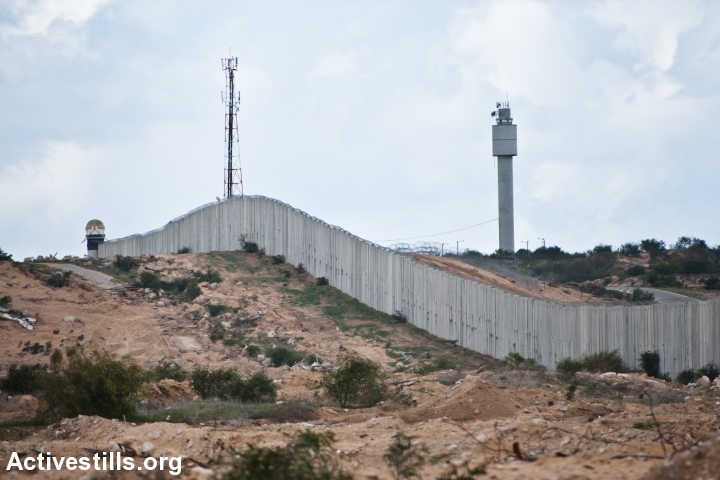 The border between Gaza and Israel. (Activestills.org)

We were wrong. The army had lots of time to consider the request, but they were in no hurry to answer, so on Sunday, we filed an urgent petition to the Beer Sheva District Court, which hears cases of Gaza residents wishing to enter Israel. We discovered, to our surprise, that the court was in no hurry either. On the contrary, the judge chose a late date for the hearing, too late, eight days after the petition was filed, when the woman, by now in mourning, desperately needs her husband by her side, now, to face the hardship together, and to take care of the burial. Our request to move up the hearing was to no avail.

We found the indifference shown by the District Court particularly astounding, especially given that last month, when we petitioned the High Court of Justice on behalf of a Palestinian woman from the Gaza Strip who was denied travel to the West Bank to attend her father’s funeral, for security reasons, the High Court, which is the instance that handles requests for travel between the Gaza Strip and the West Bank, called us in for an urgent hearing on the very same day, in Jerusalem. That was on a Thursday afternoon, when the court had already emptied, when all hearings had ended, and still, three Supreme Court justices made the effort to hold the hearing because they thought the case was worthy enough and urgent enough to hear it at the end of a busy work week. Ultimately, despite the negative position taken by security officials, the justices ruled the woman must be allowed to enter the West Bank and mourn her father with the rest of the family.

This comparison between the two instances doesn’t necessarily indicate what the final outcome would have been. It might be that, at the end of the hearing at the Beer Sheva court, the petitioner’s spouse would still have been denied entry, but at least he would have had the chance to have a say about what happens to him in court. Instead, the judge made the petition irrelevant. The woman could not stay in Israel on her own and wait for the hearing for eight days. She rose from mourning, despite her physical and mental state, and returned to Gaza before the hearing took place. Since there was no longer a need to hear the case; we had to withdraw the petition.

So what have we learned from this sad tale? That Palestinian mourning is worth less in this country, that apparently it is acceptable to disrespect the grief of a mother who carries a child for 28 weeks, delivers it and then says goodbye forever; that it is also apparently acceptable to disrespect the grief of a father, and deny him entry into Israel to be by his partner’s side. They do have three other children in the Gaza Strip after all, and those ones are alive. Perhaps the main lesson here is that we still don’t know how much more suffering Palestinians will have to endure before the Israeli authorities recognize their basic rights, like the right to mourn the death of an unborn child.

Attorney Dr. Nomi Heger is the director of the legal department at Gisha, an NGO that promotes civilian and commercial freedom of movement into and out of Gaza. This article was first published in Hebrew on Local Call. Read it here.