This week, three more U.S. churches are voting on resolutions to divest from companies complicit in the Israeli occupation of Palestinian territory. A United Church of Christ (UCC) committee unanimously approved a divestment resolution Sunday night with a final vote by the church’s general assembly expected Tuesday in Cleveland, Ohio.

The Episcopal Church is debating no fewer than seven resolutions related to Israel and Palestine this week at their national gathering in Salt Lake City. However the head of the U.S. church, Presiding Bishop Katharine Jefferts Schori, directly opposes divestment. A vote may come as early as Tuesday. The Mennonite Church USA’s national convention in Kansas City begins tomorrow, with broad institutional support for a resolution to withdraw “investments from corporations known to be profiting from the occupation and/or destruction of life and property in Israel-Palestine.”

While final results in all three church decisions may not be known for several days, one can anticipate the response from major Jewish American organizations. If last year’s divestment vote by the Presbyterian Church USA (PCUSA) is any indication, expect accusations that the resolutions are “one-sided,” “divisive,” and “demonizing.”

While these same organizations have withheld public comment as of this writing, you can expect more of the same. There is no indication that the collapse of the peace process, the bloodshed in Gaza, and the brazenness of the Netanyahu government have in any way affected their response to the broad movement of boycott divestment and sanctions (BDS) to pressure Israel.

But there are other voices — Jewish Voice for Peace (JVP) in particular — who are part of the conversations taking place within and about these church-based efforts. Over the past year, JVP’s Facebook “likes” have grown to more than 212,000—compared to 109,000 for AIPAC and 29,000 for J Street, both of which oppose BDS.

I recently spoke with Sydney Levy, JVP’s advocacy director, who is currently in Cleveland supporting the UCC divestment resolution. 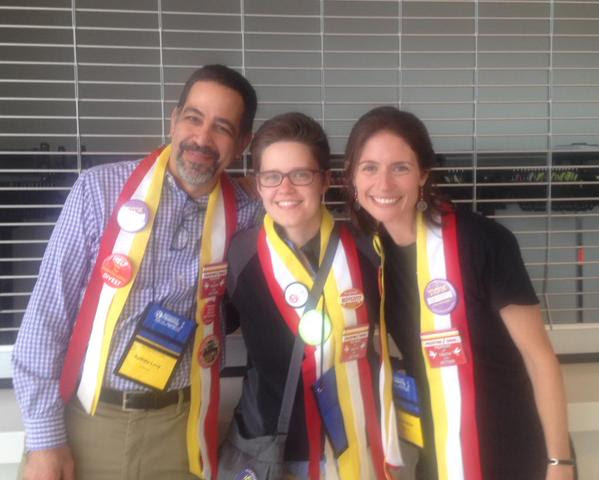 What do you see as JVP’s unique role in supporting these church divestment efforts?

The issue with churches that is particularly important for us is that from the Jewish side of the Israel lobby, there is an attempt to basically coopt interfaith relations between Jews and Christians to pretend that the only way to have a normal relationship is if Christians agree not to criticize the Israeli government.

When we go to these churches — and we have a long-standing relations with them — we remind them that in this issue, as with many other issues, Jews are divided. There’s a growing number of Jews who are coming to our side, so it is not fair or appropriate to put on hold all interfaith relations because of Israel. We are showing how you can have interfaith relations based on principle as opposed to conditions of convenience.

Churches have been relatively shy because of their concerns about relations with Jewish communities. Because of their understanding of the issue they have moved slowly. For churches in particular, my hope is that this is a wake-up call. What we are telling them is that now is the time to take action. 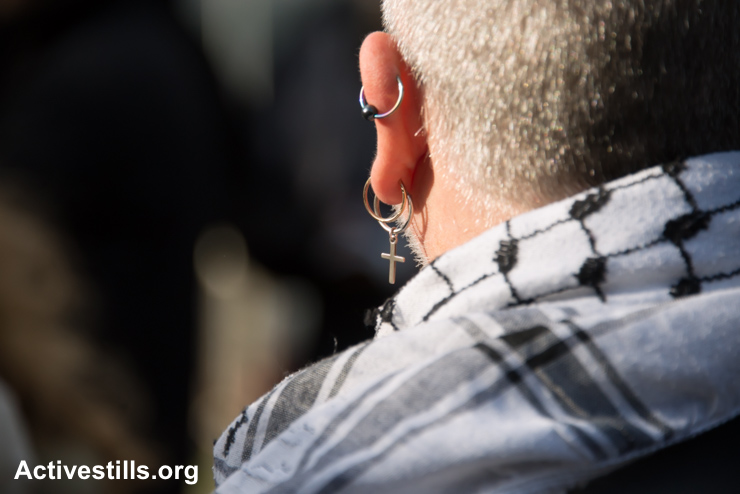 International Christian activists join Palestinians for a Catholic mass in a West Bank olive grove as a form of nonviolent resistance against the Israeli separation barrier that threatens to further divide land belonging to the town of Beit Jala, March 14, 2014. (photo: Ryan Rodrick Beiler/Activestills.org)

Last year a number of Jewish leaders predicted that the PCUSA’s divestment vote would have ‘devastating’ consequences for interfaith relations. Is there any indication that this has taken place?

When we were in Detroit last year, we were saying to the Presbyterians what I think is true: whatever decision they were going to take — for or against divestment — they were going to have a number of Jews upset at them. So their job is not to please the Jews. Their job is to follow their conscience and to do so based on principle.

The proof is in the pudding. Yes, some people have been upset. On the other hand, other Jews have been very grateful for the Presbyterian resolution, and at the end of the day, the sky has not fallen. That’s an important lesson for all of us to remember: that the backlash is not so great.

Interfaith relations are based on the concept of friendship among different faiths, on standing by each other as friends, understanding that people are acting according to their own ethical values. Whether you agree or disagree with the person, if you believe that the person is acting ethically, you are not stopping your friendship.

How would you advise church leaders or others respond to the accusations leveled at BDS: It’s ‘anti-Semitic,’ ‘one-sided,’ ‘unfairly singles out Israel’, etc.?

There is no church that we have worked with that has not taken these issues seriously; the issue of anti-Semitism weighs heavily on their minds. Both because of the historical tradition of the churches and because in the present, nobody wants to be accused of being bigoted.

What is important to remember is that all of these resolutions coming from churches address specific policies of the state of Israel. They do not target Jewishness or Judaism. They’re very careful because they’ve thought about these issues. I have worked with some of these church leaders and they’re extremely principled people. Painting them with a huge brush and saying all of this is anti-Semitic is so rude and offensive and untrue — I cannot express it in any other terms.

Now we have to explain to the churches that this is not a confusion that comes out of nowhere. When Netanyahu goes to Paris or to Washington, D.C., and he says that he is the prime minster of all the Jews, and that Israel represents all the Jews, that is wrong. That is not true. When he says that, he implies that if you criticize Netanyahu and his government, you are criticizing all the Jews.

I believe that the churches are doing really hard work on this, and that those who are committed not only for human rights for Palestinians and for peace for Israelis are also committed to the fight against anti-Semitism. 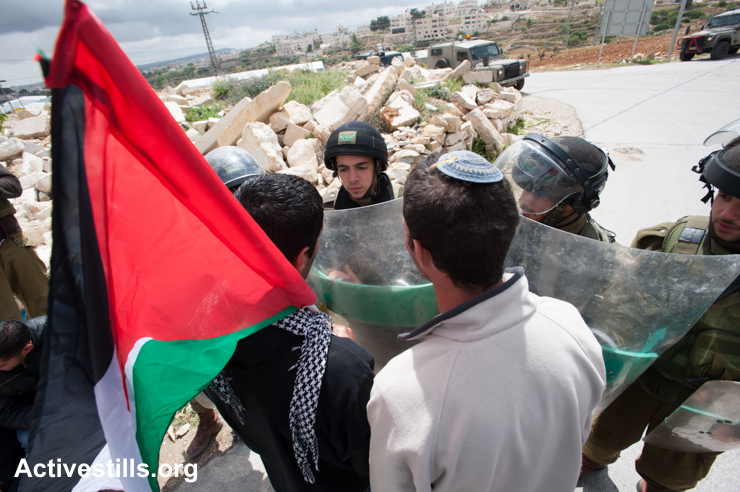 A Palestinian and a Jewish Israeli activist confront heavily armed Israeli soldiers during a weekly demonstration against the occupation and separation wall in the West Bank village of Al Ma’sara, April 5, 2013. (photo: Ryan Rodrick Beiler/Activestills.org)

Why do you see BDS as necessary as opposed to other less confrontational tactics?

Every tactic is important. The question is do they work? Dialogue, for example. Dialogue is important but at the end of the day, having Israelis and Palestinians meet together and dialogue — that is not going to bring peace in Israel and Palestine. That’s just not going to let you go very far unless you solve inherent conditions of inequality that are present. That’s the problem with dialogue—it’s important but it’s not enough.

Then there’s the peace process. The United States government has failed in trying to solve this issue. Every Israeli government since 1967 has been pushing for more settlements in the West Bank — this is part of Israeli policy from labor to Likud. But we are now in a particular government in Israel that is very vocal about it and is more right-wing than other governments, if that is even conceivable.

So under the circumstances, what people already knew becomes more obvious and more verbalized. It’s not just about Netanyahu saying that he did not support a two-state solution, it was him saying that too many Arabs were coming to the polls on election day. Racism in Israel is not new. These are things that we have been discussing for a long time. But now you have them verbalized from the prime minister.

So there is no political process at this moment. We know that the Obama Administration is not engaging in any peace process anymore. The United Nations has failed because of the U.S. vetoes. Governments have failed. The answer is with us.

How do you respond to BDS critics who insist that ‘positive investment’ in Palestine is a better approach?

On the other hand, boycott and divestments work. We have seen them working. We have seen that because of the boycott of SodaStream the factory is moving away from the West Bank. We have seen Veolia is minimizing its interests in the Israeli-Palestinian economy in the parts that relate to Palestinian oppression. They got out of the business of segregated buses in the West Bank. They didn’t do it out of the kindness of their hearts. They did it because there were many people across the globe that kept on reminding them that it was shameful and that there were economic consequences for doing that. 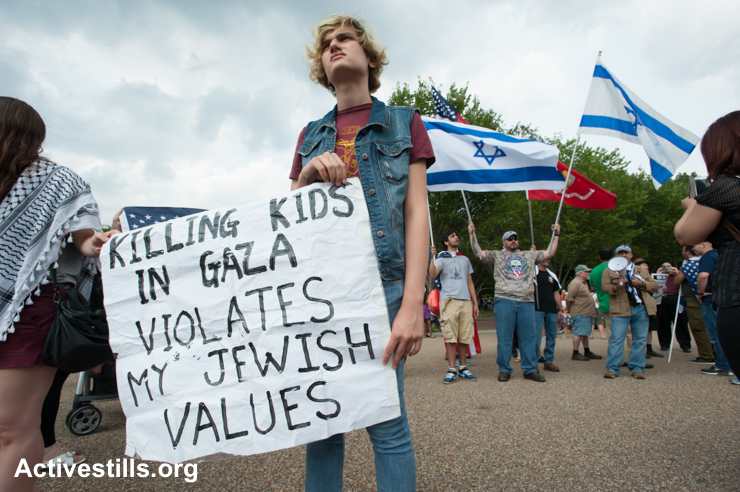 Activists protesting Israel’s attacks on Gaza stand in front of pro-Israel counter-protesters during a demonstration in front of the White House in Washington, DC, August 9, 2014.

To what factors do you attribute increased support for BDS and JVP over the past year?

Particularly since last year, particularly since the attack on Gaza, what we are seeing in growth in JVP is a reflection of the failure of other Jewish institutions in the United States [that are] trying to sweep what is happening in Israel under the rug, trying to explain it — as if it’s explainable. It’s not working anymore. So you have more and more Jews who are looking for answers.

We want the Jewish community at large to address this issue thinking about Israelis and Palestinians as human beings that are equally endowed with human rights, and not only as a conversation about what is good for the Jews what is good for Israel.

There is a challenge to every American Jew, every Israeli Jew who has questions about BDS, if you believe that Palestinians are being oppressed. If you don’t, then we should have another conversation. But we can go company by company. If we are talking about Caterpillar: there are 20,000 Palestinians in East Jerusalem that are under threat of home demolition. That means that at any moment, day or night, a bulldozer can come, they throw your stuff into the street and they bulldoze your house.

If you believe that that is unethical, then what are you doing about it? Dialogue? Are you dialoging with Palestinians about it? Are you waiting for the U.S. government to solve this issue?

Those are questions that the Jewish American community needs to ask itself. We have our answers. People can have other answers. But we cannot just ignore the questions.

Ryan Rodrick Beiler is a freelance journalist and member of the Activestills photography collective.