While Israelis are busy burying the dead, Netanyahu is busy running from place to place to speak out against the Iran nuclear deal. What he doesn’t realize, however, is that the days of Iran’s capitulation to Western interests are over. 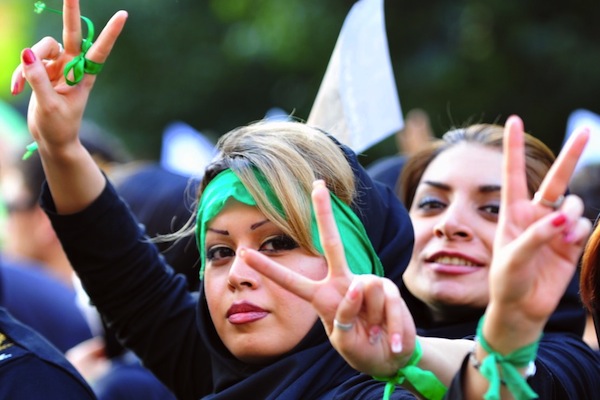 Iranian women protest in the streets of Tehran against the results of the 2009 Iranian presidential elections. (photo: Hamed Saber/CC BY 2.0)

In a week in which Israeli society stood dumbfounded after two horrifying murders that shook the country, our prime minister was mostly busy with his crusade against the nuclear deal between the West and Iran. While he managed to make some time for a brief visit to visit the Dawabshe family, and also sent his condolences to Shira Banki’s family, it seems that he was concentrating on doing everything he could to put an end to our relationship with the U.S. Netanyahu’s disconnect from reality is reaching new heights.

Through his pleas to Congress and American Jewry, Netanyahu is attempting to thwart one of President Obama’s biggest successes by intervening directly in the U.S. political system. The man who heads a country that was not party to the agreement, and who did not take part in the discussions that led up to it, is convinced that he could have reached a better deal. Netanyahu believes that instead of an agreement, the West could have forced Iran to back down.

In fact, Iranian negotiators have very good reasons to be deeply skeptical of the West. The Iranians remember not only the anti-democratic intervention by Britain and the U.S., which overthrew democratically-elected Prime Minister Mohammad Mosaddegh in 1953, after he decided to nationalize Iran’s oil supply, much of which was under British control. But Iran’s collective memory stretches back farther than that. Many of articles published over the past months by the Iranian press included the phrase “no to a second Treaty of Turkmenchay.”

During the reign of King Fath Ali of the Qajari Dynasty (1797-1834) — which was beset by economic hardships as well as belligerence from Britain, Portugal and the Netherlands in the Persian Gulf — Iran was defeated on the northern front and forced to sign two agreements: the Gulistan Treaty (January 1813), which placed Georgia and much of the Caucasus under Russian control, and the Treaty of Turkmenchay (February 1928), which gave Russia control over the southern Caucauses and forced on Iran a trade agreement that benefited Russia. Under the Treaty of Turkmenchay, Iran was made to forgo all rights to the Caspian Sea, as well as pay astronomical reparations to Russia for the war.

A country that has such a long history also has a long-term collective memory. Iranians do not forget Operation Ajax, the Treaty of Gulistan, or the Treaty of Turkmenchay. They also do not forget the West’s support for Saddam Hussein, who used the chaos of post-Islamic revolution in the 1980s to start a war against Iran. Iranians remember exactly how the West acts when it views Iran as weak.

It must be noted that this stance does not solely belong to supporters of the Islamic regime — it is a popular Iranian position that crosses boundaries and political ideologies. During the celebrations that erupted spontaneously after the announcement of the nuclear deal, many Iranians carried photos of jailed opposition leader Mir-Hossein Mousavi. Even members of Iran’s opposition, who have been arrested and jailed by the regime, would not support an agreement that would humiliate Iran and force it to surrender to the West.

These days Netanyahu is making sure to speak loudly against the Iran agreement at every chance, while enjoying the support of opposition leader Isaac Herzog. “On this issue there is no difference between the coalition and the opposition,” he says, as if the same didn’t go for other, far more pressing issues to the Israeli public. With its support for the nuclear agreement, the Iranian people sent a similar message: when it comes to our national pride and sovereignty vis-a-vis world powers, Iran has no coalition or opposition. The days of Gulistan and Turkmenchay are over.