Haaretz columnist Gideon Levy, who in the past has called Israel Air Force pilots a ‘death squadron,’ condemned Israel as ‘pure evil.’ But is he right this time? 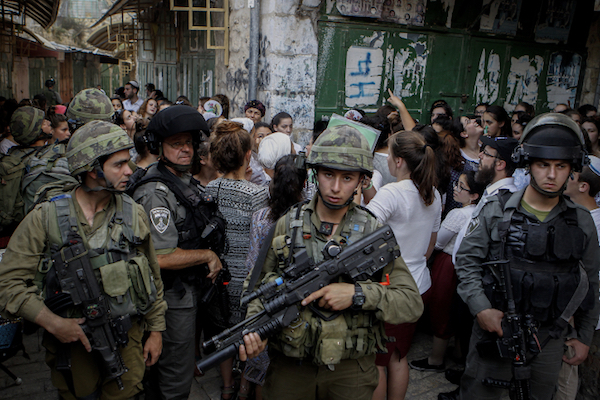 Israeli media’s reigning provocateur, Gideon Levy, is an intellectual hooligan hanging around the neighborhood pub just waiting to cause some trouble. Levy insists on instigating scholarly brawls; if he takes a few punches it’s no big deal because he relishes showing off his cogitative muscle.

In an op-ed published by Haaretz last Sunday, Levy claimed that aside from nationalism, racism, and hatred for Arabs, there is “one more element…without which the behavior of the Israeli occupation regime cannot be explained: Evil. Pure evil. Sadistic evil. Evil for its own sake.”

Citing a recent article by sociologist Eva Illouz, Levy rips the tablecloth out from under the elegant dinner of conventional, mainstream-left criticism by refusing to acknowledge the logic or global commonality of bad stuff in Israel that might be palliative to a liberal Zionist, “The evil that Illouz attributes to Israel is not banal, it cannot happen anywhere, and it has political and social roots that are deeply embedded in Israeli society,” he insists.

While Levy’s writing and role in the Israeli media landscape are respectable, should we really accept that Israel is as bad as he claims? Is Israel really evil?

Although Levy’s pronouncement is imperious and unequivocal, tackling it seriously is complex. Any person attempting to answer the question of Israel’s evil would have to escape the labyrinth by first asking another question, “What is evil?”

The answer depends on whom you ask. In the Bible, God defined what is evil. Modern ethics, however, would certainly judge as evil the god of the Old Testament who endorsed slavery, killed indiscriminately, and denied equal rights to women. The entire paradigm of evil was destroyed after Auschwitz, which revealed that evil could be modern, logical, institutionalized, popular, and broadly tolerated. In the 1960s philosopher Hannah Arendt and writer Truman Capote portrayed evil as something that could arise anywhere and in anyone. In postmodern thought the concept of moral relativism dictates that good and evil are purely subjective, with no real, constant meaning of their own.

Coming to a philosophical understanding of evil is beyond a short op-ed piece. However, if we use Merriam Webster’s dictionary definition of evil as “morally bad” or “causing harm or injury,” then even the most ardent of Zionists familiar with the policies of the military administration of the West Bank and Israelis’ racist beliefs would agree that a lot of it is indeed evil. Just watch the highly-publicized video of the cold-blooded killing of an incapacitated Palestinian stabbing-attack suspect by an Israeli soldier in Hebron, recent footage of an Israeli soldier stealing a Palestinian girl’s bicycle, or video of Prime Minister Benjamin Netanyahu using anti-Arab hate speech to get a sense of the putrid stench of hate and violence emanating from the ultra-nationalist government and the 49-year old occupation, which holds Palestinians in a stateless choke-hold of inequality.

But I have a sneaking suspicion that Levy is implying something else.

In Rollo Romig’s 2012 article for The New Yorker, philosopher Peter Dews best anticipates what I think is Levy’s implication. Contemporary use of the word evil, Dews says, “hints at dark forces, at the obscure, unfathomable depths of human motivation…it suggests a vision of the universe as the stage for battle of supernatural powers, which human beings…cannot ultimately control. It threatens the modern, enlightened conception of the world as moving towards a just and peaceable future.”

Levy isn’t using “evil” to refer to Israel as just morally bad: a lukewarm statement that would be a waste of his ink. Levy, with a preacher’s fiery absolutism, accuses Israel of the kind of evil that wears the face of a werewolf and has an infernal, dark lust for destruction. He is claiming that Israel is evil in a way that “shatters our trust in the world,” to use words From Susan Neiman’s 2002 book, Evil In Modern Thought (also quoted by Rollig).

Israel is not that kind of evil. It doesn’t shatter our trust in the world. Even Israel’s most misguided policies or beliefs usually have a political explanation as well as precedents and parallels in other normative societies; the situation is no better or worse than that of many other “enlightened” countries at different times in history. Was the United States of America, for the 250 years that it allowed for slavery, and despite all its milestones in democracy, an entirely evil country? Maybe. Maybe not.

And there are still some wise men in Sodom. The occupation casts a big ugly shadow, but Israel is home to many positive ideas, freedoms, achievements and citizens. For every racist, there is a Gideon Levy. Yes, he too is Israeli.

Levy could have used the word “sick;” sick things can be treated. The problem with Levy’s use of the word “evil” is that it is absolute, leaving no room for debate, justification or rectification. Evil should be utterly obliterated, but, as much as it should be reformed, Israel should not be destroyed.

Gideon, Israel is not evil with a capital E. Israelis are not monsters. They are human and fallible and doing some very bad things. That, in itself, might be even scarier.