Both BDS supporters and detractors are touting the Presbyterian Church’s divestment vote as a BDS victory. But regardless, isn’t it a step in the direction every anti-occupation person ought to be rooting for?

The Presbyterian Church U.S.A. (PCUSA) narrowly (310 to 303) voted late last week to divest some $21 million from Caterpillar, Hewlett-Packard, and Motorola for profiting by selling goods which are used in the administration of the occupation and the destruction of Palestinian homes and property.

The full text of the divestment resolution can be read here.

Strangely enough, or perhaps quite expectedly, both BDS activists and anti-BDS activists are touting this as a victory for the global boycott movement. The former are doing so with glee, saying that the Presbyterian divestment is a step in the right direction. The latter are shaking their fists with anger saying that people will see this as a BDS victory.

To be clear about the actual intent of the Presbyterian Church U.S.A., this is what the resolution says about BDS:

This action on divestment does not mean an alignment with the overall strategy is not to be construed or represented by any organization of the PC(USA) as divestment from the State of Israel, or an alignment with or endorsement of the global BDS (Boycott, Divest and Sanctions) movement.]

Only someone who has refused to read the actual resolution would think this is pro-BDS document.

It very well may be a good step — a major divestment — in the direction that BDS activists want to go, but isn’t it also a step in the direction every anti-occupation person ought to be rooting for? Shouldn’t BDS activists be happy that this is a $21 million blow to the occupation industry at the same time as anti-BDS activists — for example, some outspoken Jewish groups that  say they support a two-state solution – can also be happy that this document says things such as, “the two-state solution remains the best path to sustainable peace”?

Everyone who stands for self-determination should be happy about this motion, which is a non-violent action against corporate entities profiting from the occupation’s perpetuity. After all, the perpetuation of the occupation is a moral and strategic contradiction to the notion — and reality — that all peoples have the right to self-determination. 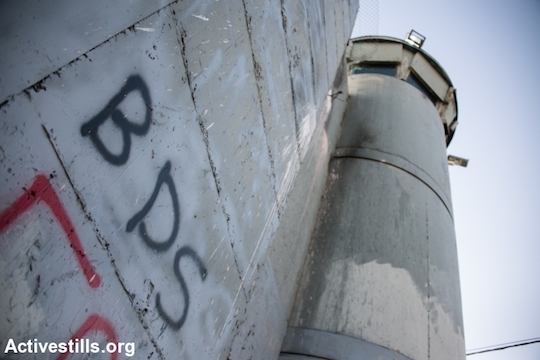 As usual, the argument that the PC USA ought to focus on bigger human-rights-violating fish such as China or the United States doesn’t hold much water. It wasn’t a sound argument when the boycott movement targeted apartheid in South Africa and it is not a sound argument when faced with the ever-present violence of the occupation. Defenders of U.S. foreign policy, Canadian environmental policy, China’s human rights violations, and Qatar’s labor practices also feel they are unfairly put in the spotlight.

If we are truly against the occupation, no matter our politics, we should be happy there is a chance that the 15 minutes in the limelight presented by the Presbyterian divestment can help shine a light on the “light unto nations” and help us end this injustice so that self-determination for all peoples can prevail. Too much time and energy in progressive circles is exerted on calling people out for calling out Israel. Instead, we should be using that spotlight and that energy to end the occupation as we build a global movement for a just and sustainable world.

A. Daniel Roth is an educator and journalist living in South Tel Aviv. You can find more of his writing and photography at allthesedays.org and follow him on twitter @adanielroth

Correction:
A previous version of this article mistakenly quoted a passage on BDS from the PCUSA vote’s minority opinion, which was not explicitly approved by the General Assembly. H/t to Joe Catron for pointing out the error.

More on BDS:
What BDS and the Israeli government have in common
Addressing Israel’s addiction to settlements
After Kerry, only BDS may save the two-state solution
Why BDS won’t work, and what can