What Israel needs, in the battle against Jewish terrorism, is a Lester Freemon; What the ISA can supply is a weak-kneed Jack Bauer

Israel was shocked last week, as violent settlers attacked the IDF directly, ransacking an army base, stoning a colonel and his deputy, and throwing Molotov cocktails at soldiers. The shock was reinforced by the IDF’s response: It did nothing. The soldiers cowered and did not even arrest their assailants. Later on, the Minister of Defense, Ehud Barak, said that the army did not have any intelligence on the attackers: It does not gather information on Jews, he said.

Barak was, for once, correct. The duty to collect intelligence and investigate Jewish terrorism rests with the Israel Security Agency (familiar to non-Israelis as the Shin Bet). The ISA enjoys a fearsome reputation and is widely considered to be the best of Israel’s intelligence agencies. It foiled dozens, of not hundreds, of terrorist attacks in the last decades, and is essential to the controversial “targeted assassination” program, where it is relied upon to provide pinpoint-accurate intelligence.

The last year has seen a significant rise in so-called “price tag” attacks: Attacks by settlers or their supporters on Palestinians, both in the West Bank and Israel proper, in retaliation for actions considered hostile to the settlers by the IDF. The logic is that of hostage-taking: Harm our interests, and we’ll harm Palestinians, and thereby put the relative quiet at risk. Attacks by settlers on soldiers are not new: They have been documented for decades. They have never been so high-profile, however. 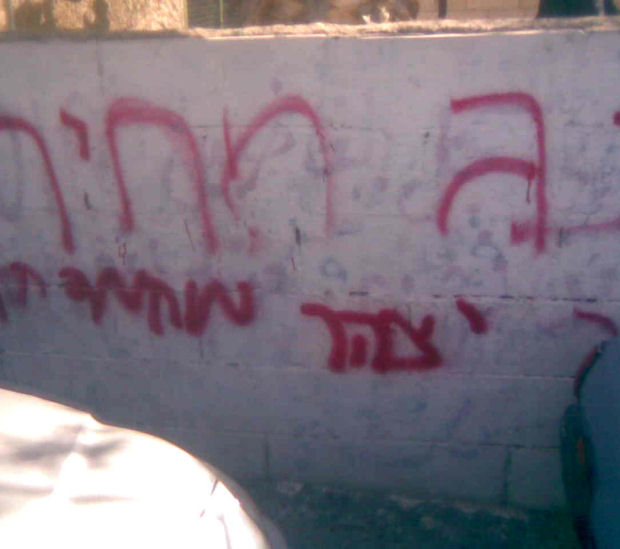 Another mosque, in Bani Naim, was descreated this week, with no arrests (Photo: B'Tselem)

Furthermore, this failure isn’t the first: The Jewish Division is the ISA’s problem child. Its most notorious case came last year, when it attempted to indict Haim Perlman, a Jewish extremist, for a series of stabbings of Palestinians which took place a decade ago. Perlman, who was for a while an ISA informant, managed to record (and later leak the recording) his case officer soliciting him to murder the chief of the Islamic Movement, Sheikh Raed Salah. After a month in detention, most of it without access to an attorney, and after leaking outlandish nonsense about Perlman allegedly assisting Rabin’s assassin Yigal Amir and Hebron mass murderer Baruch Goldstein (he was 15 and 14 years old at the time, respectively), the ISA had to let him go. They had nothing on him.

Why the string of failures? For two reasons. One, the ISA has much more latitude when it comes to Palestinian suspects. It can detain them longer, prevent them from seeing a lawyer, and, yes, torture them. While torture is illegal, no ISA officer has been held accountable for torture, since the ISA conducts its own internal investigations – this despite the fact the organization has been caught lying several times. The ISA openly admitted this week that they have failed in the struggle against Jewish terrorists, and supplied the reason why: “They keep silent during interrogations.” In the fight against settler terrorism, we need a Lester Freemon; The ISA, however, can only supply us with a Jack Bauer.

Second, the ISA simply doesn’t have the same leverage over Jews. When it comes to Palestinians, and to a lesser effect Israeli Palestinians, the ISA is the authority which has the final say over the many, many documents and permits they require to merely live. This gives it almost unchecked power over the lives of Palestinians – and this makes recruiting agents almost laughably easy.

When this net of control is removed, the ISA is almost powerless. Case in point: Gilad Schalit. Before Israel retreated from Gaza in 2005, the ISA’s intelligence was gold. Once its yoke was removed, and Gazans did not permit to drive their donkey-carts (true story), the gold turned to dust: The ISA was unable, for more than five years, to locate an Israeli soldier captured and held less than 10 miles from the Israeli border. They had no leverage with most Gazans. They kidnapped some; apparently, not the right people.

Israeli settlers in the West Bank carry with them, in their enclaves, all the rights of Israeli citizens; They are much more aware of them than the average Israeli; And they have a politically-astute public behind them. The ISA, used to arm-twisting tactics, has yet to find a way to tackle a much more subtle opponent than an underarmed Palestinian teenager. Nor is it likely to learn soon.