The highest court in the land delays the demolition of a synagogue built atop stolen Palestinian property, fearing retribution by right-wing extremists. Has terrorism officially won in Israel? 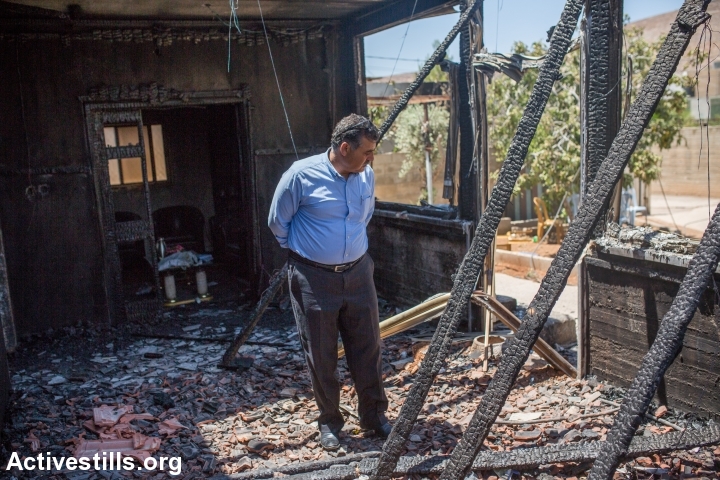 A man examines the remains of the Dawabsha family home during the funeral procession of Sa’ad Dawabsha, in the West Bank village of Duma, August 8, 2015. (photo: Yotam Ronen/Activestills.org)

The State of Israel just validated the very concept of “price tag” violence, which Israel officials have often described — but never legally defined — as terrorism.

The state on Tuesday asked the High Court of Justice to delay the court ordered demolition of a West Bank synagogue built on stolen Palestinian land. The state’s main argument in asking for the extension, which the court begrudgingly granted, went as follows: “Police believe that demolishing the building is likely to lead to violent acts by extremist right-wing actors against Arabs and Muslim religious symbols.” (Hebrew)

In other words: we do not want to enforce the law because we are afraid the criminals will punish us for it. Or, in even clearer and scarier words: we have accepted that terrorists will make us pay a price for carrying out pre-declared, court-ordered, and government sanctioned duties.

There is no singular definition of terrorism, but most include a few basic concepts: the use of violence against non-military targets to influence a government or society in order to advance political aims.

What happened in the settlement of Givat Ze’ev this morning? A group of people openly declared their readiness to use violence in order to resist the demolition of a building built on stolen land, and convinced the police and the government of the State of Israel to declare that they are too scared to enforce the law.

An affidavit from the highest echelons of Israel’s police force warned that the fallout from the extremist right wingers is “likely to spread beyond the borders of Givat Ze’ev, where the synagogue is located, into the territory of the West Bank and the rest of the country, significantly harming security and public order.”

Is that it? Has terrorism won?

Of course not — it’s just that it’s effective. Horrendous, contemptible and an affront to humanity. But effective.

Violence may not always be the deciding factor, but it has served the settler movement well. The Park Hotel takeover in Hebron on Passover of 1968 led to the establishment of the first Jewish settlement inside a Palestinian city. The Ibrahimi Mosque massacre in 1994 led to the complete takeover and segregation of the central market area of the same city. Varied combinations of civilian and uniformed violence have been used across the West Bank to systematically steal Palestinian land and intimidate its rightful owners.

And as seen in this case, “price tag” attacks have succeeded at making already hesitant state bodies even warier of implementing court or military orders that run the risk of angering the settler movement.

The success of the price tag movement and violent settlers in general, however, also exposes the legal apartheid, discrimination and dual standards enjoyed by Jewish and non-Jewish movements that use violence to advance political aims against the wishes of the state.

If a group of Palestinians had publicly declared that they were willing to die and threatened to use explosives (gas canisters) in a confrontation with Israeli security forces, they would probably not come out alive and if they did, they would be tried in military courts, put into administrative detention or sent into exile.

When it comes to Jews doing the same, there is a long tradition of precedent for getting away with such threats and violent reprisals scot-free. In the early 1980s, in the final days of Israel’s withdrawal from the Sinai Peninsula, members of Meir Kahane’s Kach terrorist group barricaded themselves inside the settlement’s synagogue, booby trapped it with gas canisters and said they would rather die than give up the land. They were not killed. They were not prosecuted.