Dozens of Palestinian journalists protest to demand the release of 21 of their colleagues currently imprisoned by Israel. 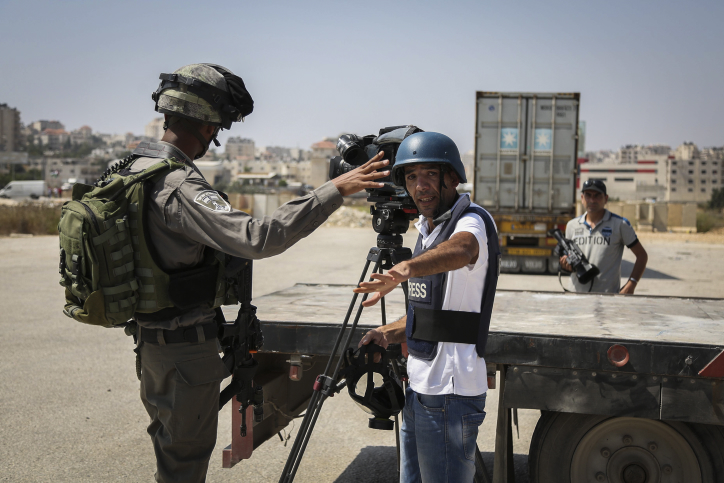 Israeli security forces arrested six Palestinian journalists across the occupied territories over the past several days for alleged incitement.

Four of the journalists — Alaa Rimawi, Mohamed Hamdan, Qoteiba Hamdan, and Hosni Angas — work for the Hamas-linked Al Quds television station. They were arrested on July 30th. Mohamed Hamdan, was detained in an Israeli prison for several days last February after filming a demonstration in support of Palestinian prisoners, while Rimawi, Al Quds’ bureau chief, was previously imprisoned for 12 years in Israel.

Israeli forces also arrested Mohamed Anwar Mouna, a journalist with Al Quds Press, which is also affiliated with Hamas, and who also manages a local radio station in Nablus, as well columnist Lama Khater, who writes for various Palestinian outlets.

According to Reporters Sans Frontieres (RSF), a Paris-based NGO dedicated to the protection of journalists around the world, the arrests were politically motivated

“Palestinian journalists held solely for political reasons must be released at once,” said Sophie Anmuth, the head of RSF’s Middle East desk. “In the absence of any proof to the contrary, these journalists have committed no crime justifying their detention, which is therefore completely arbitrary.”

On Sunday, dozens of Palestinian journalists took part in a protest outside Ofer Military Prison near Ramallah to demand the release of 21 journalists currently imprisoned by Israel. According to the MADA, an NGO that defends Palestinian journalists, the Israeli military closed a total of 17 Palestinian media outlets last year, accusing some of them of providing video footage to Hamas-affiliated stations. The closures were accompanied by arrests of journalists, some of whom were held for several months.

The IDF Spokesperson Unit issued the following to the arrests of the six journalists:

Last week, IDF forces from the Binyamin Regional Brigade and the Ephraim Regional Brigade, together with the Shin Bet security service, arrested four Palestinians suspected of incitement and activity on the Al Quds TV channel, which was declared a terrorist organization. This channel operates on behalf of Hamas and serves as its propaganda arm, and was therefore declared a terrorist organization in September 2017. All the suspects were transferred for interrogation by the security forces. Contrary to the claim, the arrests were not carried out on political grounds. The security forces will continue to act against incitement in order to prevent terror and to protect the security of the residents.

A version of this article first appeared in Hebrew on the Seventh Eye. Read it here.