Sixty thousand Arab youths in Israel are defined as ‘idle,’ neither working nor studying, a precursor to a life of unemployment and violence. It’s time for the state to take drastic steps to ensure they too have a future. 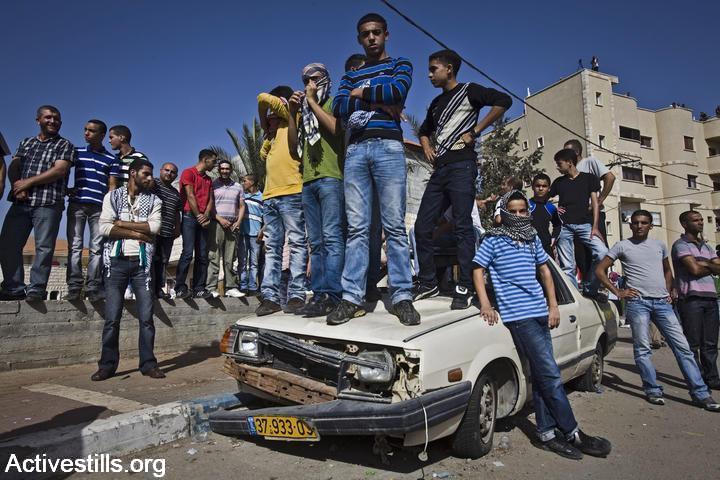 Sixty-thousand young Arabs between the 18-22 are defined by the state as “idle” — those who do not work or study. But the term is deceiving: there is nothing idle about these young people; in fact, the term is probably better suited to the local authorities who do nothing to ameliorate their situation.

Forty percent of people in this age range, young men and women at the height of their mental and physical capabilities, cannot make anything of themselves. Instead they carry with them only hormones and smartphones — without the possibility of education, money, language, or a future.

A study published in 2011 by Professor Momi Dahan and Dr. Zvi Eckstein defined the phenomenon as such: a threat that affects nearly half of the next generation of Arab citizens. Add to that the deterioration in Arab society over the past few years, and it is likely that the youth’s “idleness” has already been translated into negative, self-destructive behavior.

Despite the fact that “idleness” affects twice as many young Arab women as men, women have higher rates of survival in the education system before they reach the stage of post-high school idleness. But let’s not pretend that women deal with the despair in a more productive way, as they often get engaged as a sole means of survival. It is true that a large percentage of young Arab women are married before they this, and they remain idle — they neither study nor work.

It is no coincidence that such a large group of people has become a statistic. In fact it is a miracle considering the fact that 53 percent of Arab families live in poverty. The ability to function decreases accordingly when there are no services in Arab society that can assist these young people who have zero access to studies, sports, or employment.

If anyone thinks that idleness is simply a group of young people sitting loitering on a main road with a bag of sunflower seeds or spending hours looking at a screen should recognize that this is the optimistic scenario. Yet it is not always reflective of reality.

For many life is far less optimistic and is often comprised of smoking hash in the schoolyard at night, shooting off fire crackers in the middle of the neighborhood, or drag racing in outdated cars without licenses. And if they do have licenses and insurance, they’ll make sure to speed through the streets of their village with the windows down and the music blasting. For those who are “idle,” it doesn’t take much to start a fight over nothing. 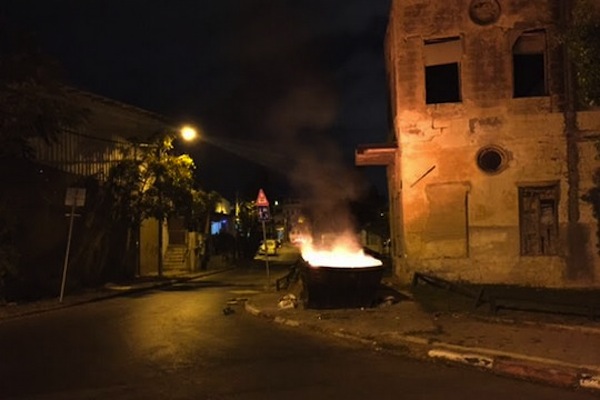 A trash container is set ablaze in the middle of a Jaffa street. (photo: Yael Marom)

It doesn’t take a genius to guess how many of these young people do not have matriculation certificates; how many of those who do make it into universities or colleges; and how many of them can support themselves while studying. According to Dahan and Eckstein’s report, the “idle” ones spend an average of 9.5 years in school, although they have been idle long before they reach the age of 18. This statistic is unsurprising when taking into account the intolerable ease with which schools in Arab society throw these teens into the street.

Among them are boys who go from part-time jobs with employers from the village who do not pay on time, if at all. Others might wash dishes in Tel Aviv or Eilat, or work in construction in the sweltering heat, all while exposing themselves to the dangers of physical labor.

The vast majority of these young people won’t live in their own apartment. Half of Israel’s Arab population lives in the shadow of the state’s oppressive planning policy regarding its Arab villages. Meanwhile the price of one dunam can reach millions of shekels.

An idleness that could result in death

Even this ugly, less optimistic scenario is dwarfed by crime and young Arabs’ encounter with the law — a scenario that has turned into reality over the past few years. There have been 27 Arab murder victims since the beginning of the year.

Palestinians citizens of Israel Israel participate in a demonstration in the city of Ramle on November 26, 2015 against domestic violence and the growing number of women who have been murdered. (Activestills.org)

We have also become accustomed to the fact that the real criminals are hardly caught, despite the fact that 60 percent of those arrested in Israel are non-Jews; 56 percent of minors arrested are non-Jews; and 59 percent of these arrests do not end in indictments. Thus many Arabs can end up spending much of their time in interrogation rooms, whether or not they were involved in criminal activities, and regardless of whether they are being targeted as immediate suspects. Meanwhile the police are powerless to catch actual criminals.

One young man told me: “Every time they take me in for interrogation because someone stole or lit a trash can on fire at school, the court end up dropping the charges. But I am always forced to go through this song and dance along with my attorney, who charges several thousand shekels — more than my father gets in social security benefits.” If the court opens a case against the boy, his future becomes predetermined: stuck in the lowest rungs of society for the rest of his life. This is not how one builds trust in the law.

Such a large percentage of young people live without the possibility of self-actualization, choked by their surroundings, and facing economic difficulties and a violent environment. This is not an internal Arab issue, nor is it an issue of how Arab citizens are raised. When such a large segment suffers from perpetual failure, it becomes an issue of state policy.

And what do we do? While Arab authorities take part in discussions on policing, enforcement, and enlisting Arab policemen, no one is speaking about helping Arab youth. Welfare authorities do not identify and assist youth older than 18, and it is unclear whether they truly make an effort to help those who are underage. Meanwhile schools do not live up to their stated mission, priding themselves instead on only a handful of success stories.

Not only do local authorities do little to nothing in creating employment opportunities, they are bloated with workers who are often less than suitable for social work, while these young people spend their days in the streets, waiting for the next fight to break out.

Only in our dreams can we envision a sports complex or any other type of institution built so for the sake of Arab youth. We can only dream about an initiative that seeks to take care of even a few “idle” teens — to fix their broken future and prevent the harm they will cause society.

We must, from the onset, recognize these young people as those in need — not as bullies. The time has come for every village and town to create a local program for identifying young people who are in danger, and provide them with employment opportunities in a work environment supported by welfare and government authorities.

Instead of matriculation exams, pour resources into preventing young people from dropping out of high school — at all cost. Teach them how to drive, teach them how to manage their money and get a job, teach them sexual education, teach them to recognize and internalize the rights of others. In other words, go to all lengths to save them.

I do not wish to minimize the responsibility the families have in educating their children. But anyone who believes that a family can simply pluck their child from a violent society, and assume that he or she can just continue as if everything is normal, is wrong.