On August 19, 2013, the Interior Ministry demolished all six residential structures of Tal ‘Adasa, a Bedouin community living within Jerusalem’s municipal boundaries, close to the Palestinian neighborhood of Beit Hanina, B’Tselem reported. The community is part of the al-Ka’abneh tribe, which has been living in the area since the 1950s. 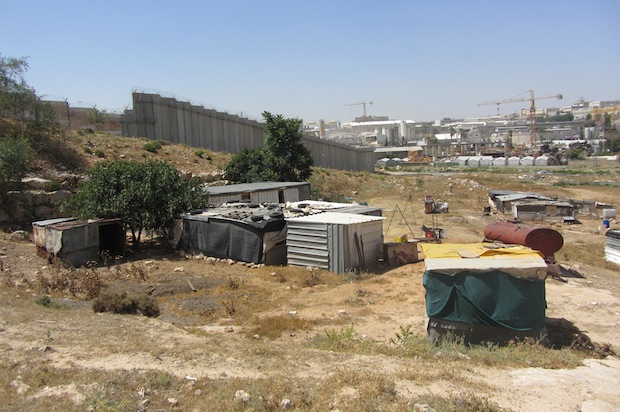 Between a wall and a hard place: Residential structures in Tal ‘Adasa (photo: ‘Amer ‘Aruri, B’Tselem)

In addition to the demolition, municipal inspectors informed community members they have 10 days to evacuate the area before being forcefully removed, and ordered them to clear the demolition debris themselves. Otherwise, clan members were told, they would be forced to pay tens of thousands of shekels to cover the cost of debris removal and could face arrest.

Since Israel’s occupation of the West Bank and annexation of East Jerusalem in 1967, community members have not filed for Jerusalem residency, and according to their legal status, they are not “permanent residents of Israel.”

In 1995, the Jerusalem Municipality forced the community to leave its previous area of residence, near the Atarot Industrial Park, and demolished their homes. The community relocated to the current site, close to the town of Bir Nabala, remaining within the municipal boundaries of Jerusalem. They subsequently began earning a living not only from herding sheep and goats as before, but also from cultivating plots of land owned by residents of Beit Hanina. The community has never been connected to Jerusalem’s water or electricity supplies.

Since 2005, the Jerusalem Municipality has been pressuring them to relocate again.

In 2006, the separation barrier was constructed to the east and west of the community’s site of residence, rendering it an enclave within the Jerusalem municipal jurisdiction that is isolated from the rest of the West Bank. As the community members are not registered as East Jerusalem residents, they cannot move freely within the boundaries of Jerusalem. But because of the wall, they have been unable to directly access the nearby Palestinian neighborhoods of Bir Nabala and a-Ram, where they have family and business ties, and where various services are available to them. For several years after the barrier was erected, they were occasionally given limited permits to cross the Qalandiya checkpoint and access the rest of the West Bank. However, since 2011, the Civil Administration has refused to issue them such permits.

As a result, some of the children in the community, who attend school in Bir Nabala, are forced to stay with relatives there and rarely come home. The other children live at home and attend school in Beit Hanina, which is within Jerusalem’s municipal boundaries.

B’Tselem has called on the Israeli government to acknowledge the rights of the Tal ‘Adasa community and find a solution to the community’s housing issue that is acceptable to its members. “Demolishing their homes and forcefully displacing them constitutes a violation of international law and will leave them homeless and without a source of livelihood,” B’Tselem’s spokesperson stated.