Things have been quiet in the Negev lately. So the authorities decided to take advantage of this period of relative calm and, while everybody’s attention was elsewhere, sent the bulldozers to destroy the unrecognized Bedouin village of Al Araqib — for the 90th time. 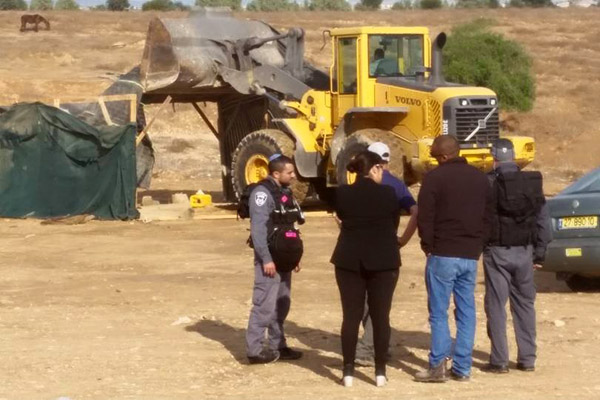 Bulldozers returned to the Israeli Bedouin village of Al Araqib on Wednesday, along with police officers and someone from the Israel Land Authority. For the 90th (!) time, bulldozers destroyed the shacks and lean-tos the villagers have been living in since the authorities destroyed their original brick homes just over five years ago.  They didn’t need too many police officers, nor many bulldozers. Just two were enough. Along with one person from the Israel Land Authority, and some drivers. It’s routine now. Everyone knows their role. Including the villagers.

The residents stood helplessly as their few remaining resources — lumber, canvas and tarpaulin sheets — were confiscated or broken. They rescued a few possessions —  kitchen utensils, mattresses, children’s toys and some chairs. Then they stood back and watched the bulldozers do their work. Afterward, as on all the previous occasions, they stood there and took photos. What else can they do. Where do they find the strength to stay there, not to be broken, to rebuild from the ruins once again.

I called Aziz Alturi, one of the leaders of the struggle for Al Araqib.

Hello Aziz, I’m looking at the photos you posted on Facebook and my heart is twisting again. This is the 90th time, isn’t it?

Yes, this is the 90th time. They came this morning, in this freezing winter weather, with the rain pouring down. Yesterday we had a huge downpour, and today and tomorrow are supposed to be stormy as well. But the government does not care. It has its plans to carry out. It doesn’t matter if it’s pouring rain, or a heat wave, or the middle of Ramadan. Every day is a good day for waging war against citizens of Israel. Look at how the whole country is outraged that a few thousand houses lost electricity because of the storm. That’s all they’re talking about. Well, look at us. Here in the Negev we’ve been living without electricity for more than 60 years. Without access to running water. And look at how hard it is for them to live without electricity for one day. So how are we supposed to react. 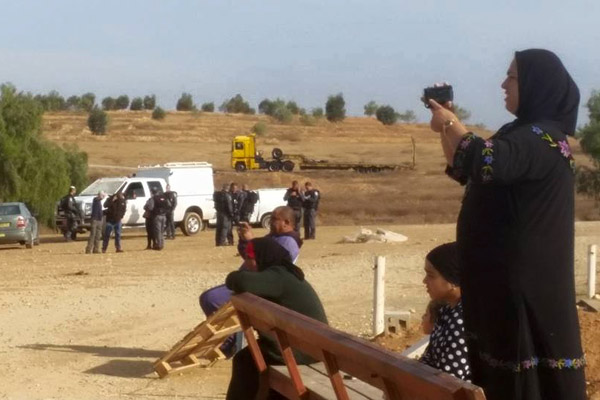 So what happened this morning while things seemed to be calming down in the rest of the country? Is the state taking advantage of a period of relative quiet?

This country is not looking for quiet and doesn’t want to do anything to calm things down. When they’re too busy to destroy here, they destroy elsewhere. You see the way they behave. Whenever they have an opportunity to pour kerosene on the fire, to provoke, they take advantage. If they don’t see an opportunity to provoke, they’ll look for one. In the Negev, in East Jerusalem, in Hebron — wherever they can. In every place where things seem to have calmed down a bit, they wade in and start a fire. This is not an error or carelessness. They have no intention of allowing any Arab who lives under their authority, whether inside the Green Line or in the occupied territories, to relax and enjoy his life. They are not here to serve our interests, but of other citizens.

When it happens for the 90th time, does it still hurt the same amount? Do you start to get used to it?

It hurts each and every time. There are things that you just can’t get used to. When they demolish your home, you don’t get used to that. Maybe you know better what to do when it happens, to take care of the kids, to salvage what you can, to photograph, but the pain is the same pain. And on the other hand, they will not break us. There have been 90 demolitions and maybe there will be another thousand, but we are here, on our land, next to our cemetery in which our forefathers have been buried for over 100 years. We don’t have anywhere to go, and we have nothing left to lose. We won’t let them banish us from our land.

Is there anything you think is important to say to those who will read this?

First of all, I want to say that we’ve learned from history that those in power never remain the strongest party forever, and the weaker party doesn’t remain the weaker one forever. And we want to say to every Jew, to every Israeli who is proud of himself and loves this land, who loves the Negev and who loves his Judaism: rise up against this racist government. Because this government will bring only destruction to the country. It won’t bring about anything else. Only destruction and ruin on us all.

People need to open their eyes. A smart Jewish friend with whom I worked once told me, Aziz, “you need to imagine how we are all in the same boat, everyone with his own paddle. Anyone who stops rowing is thinking only of himself, and in the end we all drown.” And that’s exactly it. Everyone who doesn’t stand up now and take his oar and do something for this place’s future, it’ll catch up with them. We live in a country that is oppressing its own citizens. Everywhere.

Thanks for speaking with me. I stand in solidarity with you. 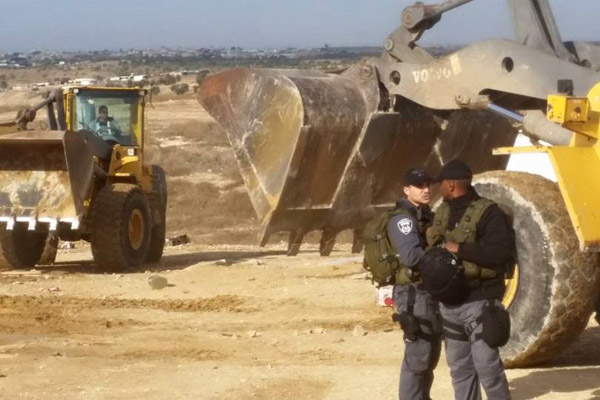 I hang up and think about the people of Al Araqib who, for the 90th time, are wandering among the ruins of their homes, salvaging and gathering what they can, and preparing for the night that is quickly approaching. The children need somewhere to sleep, and everyone needs shelter from the cold rain. Some of them will sleep tonight, like after every demolition, in a car, some will improvise some shelter from the aluminum siding that remains. Nobody will consider leaving, of giving up, of surrendering. Tomorrow somebody will surely bring a few sheets of plywood and some nails, and they will have to find some people to help raise the minimum they need to survive once again. Until next time, in a few days or maybe even weeks.