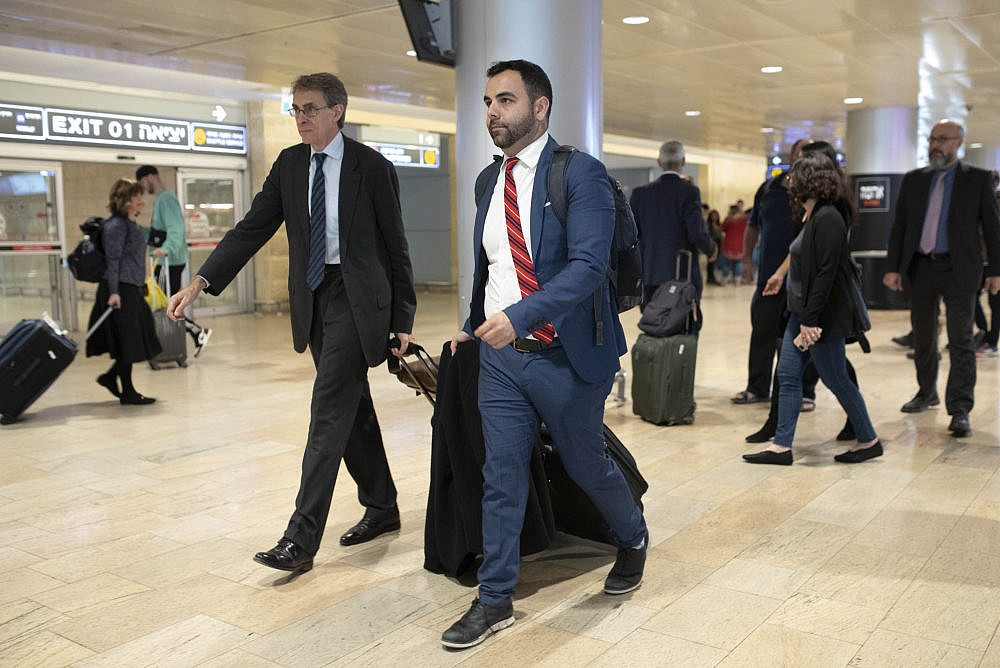 Omar Shakir, Human Rights Watch’s Israel and Palestine Director, was deported from Israel on Monday after losing his legal battle to stay in the country.

The deportation marks the first time someone already living in Israel has been forced out of the country under a 2017 amendment to the Entry Law, which allows the state to bar entry to foreign nationals it suspects of supporting Boycott, Divestment and Sanctions (BDS).

Shakir, an American citizen, was seen off by the heads and staff of several Israeli NGOs, including Breaking the Silence, Peace Now and Gisha, who gathered at Ben-Gurion Airport Monday afternoon to protest his deportation. The protestors at the airport held up signs reading, “You can’t hide the occupation.”

At the beginning of November, the Israeli Supreme Court rejected Shakir’s petition to stay in the country, which he had filed after the Interior Ministry revoked his work visa in May 2018 and ordered him to leave the country within two weeks.

The government justified the cancellation of Shakir’s permit by arguing that as a student he supported boycotting Israel, more than a decade ago and before becoming HRW’s Israel and Palestine director in 2017. Shakir was the head of Students for Justice in Palestine while attending Stanford University, and at the time called for the school to disinvest from companies that profited from the occupation.

Shakir delivered a brief statement to the press before boarding his flight to Jordan, from where he will continue to manage Human Rights Watch’s Israel and Palestine branch. 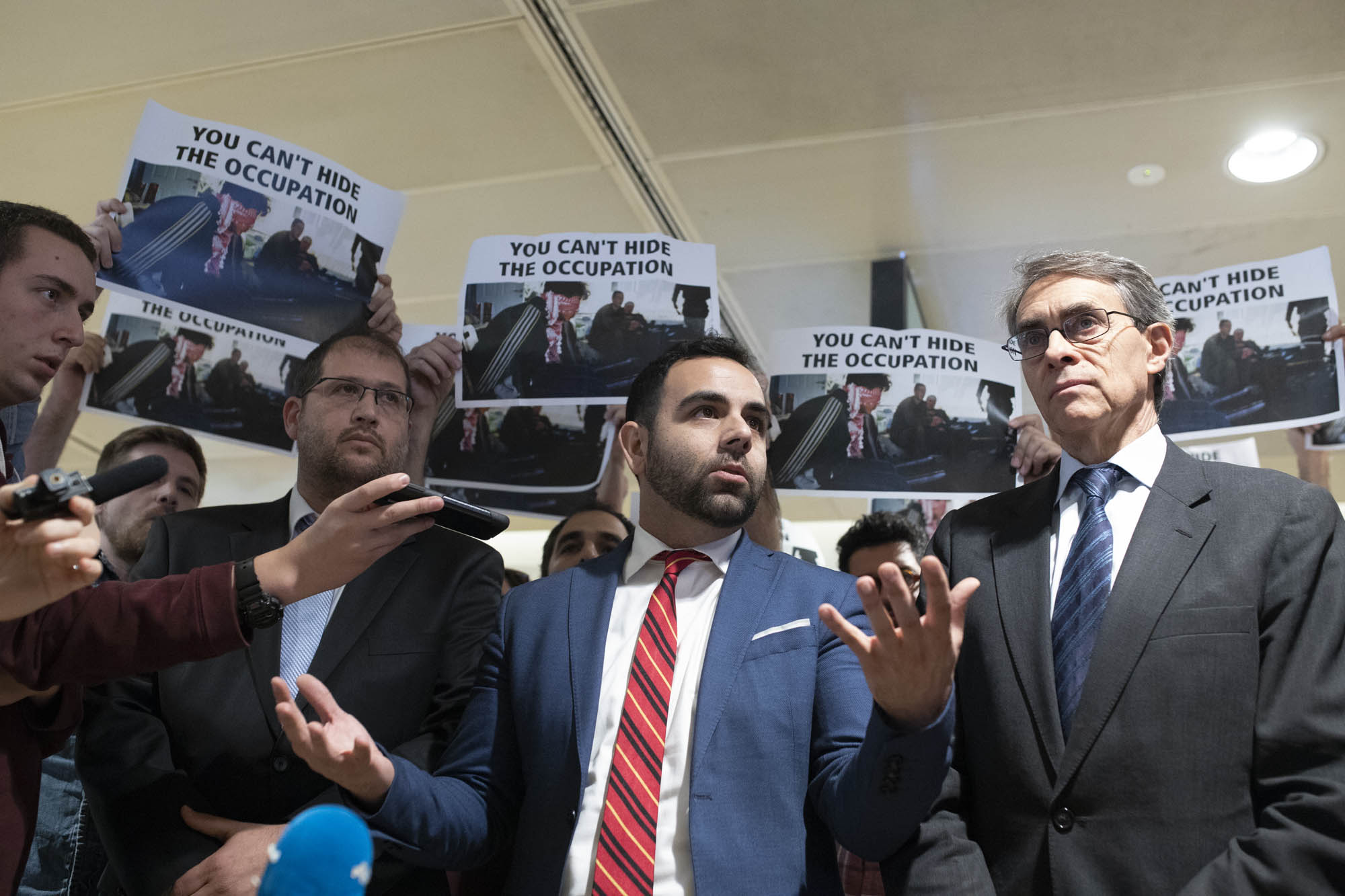 “Today culminates a two-and-a-half year effort to deport me because of my human rights advocacy, as an effort to muzzle Human Rights Watch (HRW),” Shakir said. “But that effort has failed, and…has only shown the degree to which the human rights community, Israeli and Palestinian, are under attack.”

He then addressed the human rights NGO representatives who had come to the airport. “I will continue to work every day for human rights in Israel and Palestine. It has been the privilege of a lifetime to work with our Israeli and Palestinian partners and friends. The hardest part of this [is] not being able to work with you every single day on the ground…[but] we continue that same fight, and one day you will welcome me here, I hope, when it’s a better day…in which all people, Israeli and Palestinian, have their human rights respected, and equality for all is the norm.”

Attorney Michael Sfard, who represented Shakir, called the expulsion “an act of cowardice.”

“The Israeli government is afraid of organizations that record the reality of the occupation and that protect human rights, and is afraid of criticism” he said.

“We are undeterred and will continue the fight for human rights, as will Omar and Human Rights Watch,” he added.

Shakir was accompanied at the airport by HRW head Kenneth Roth, and the head of its Middle East and North Africa branch, Eric Goldstein, who left the country with him. Roth, also speaking to the press, said that despite Israel expelling Shakir in order to try and put a stop to his work, he would be able to continue monitoring human rights from Amman, the Jordanian capital, where the Israeli government wouldn’t be able to “censor” the organization.

“The Israeli government thought that by censoring Human Rights Watch they could stop our reporting on the illegal settlements, but it’s only reinforced our determination to continue reporting,” Roth said. “This move has utterly backfired and has only intensified the spotlight on the systematic oppression that exists today for Palestinians in the West Bank.”

A version of this post first appeared in Hebrew on Local Call. Read it here.

email
Before you go…
A lot of work goes into creating articles like the one you just read. +972 Magazine is nonprofit journalism, owned by many of our writers, editors, and journalists. In order to safeguard that independent voice, we are proud to count you, our readers, as our most important supporters. With your support, we can keep +972 Magazine a strong, independent, and sustainable force helping push the global discourse on Israel/Palestine.
DONATE
More About Human Rights Watch 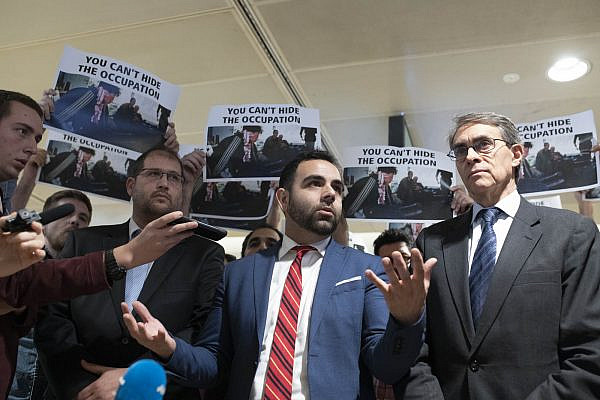 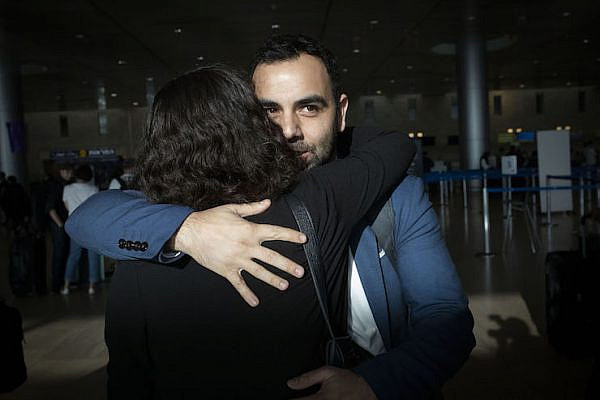