War brings out the best in Israel, and the worst. But it’s the worst qualities that allowed this war to happen in the first place, and that are preparing the ground for the next one.

I’ve always thought, and still think, that if I were in real trouble somewhere, if I were being mugged in Miami, say, and I could choose the nationality of the nearest bystander, I would choose Israeli. They are brave, and they don’t hesitate to help someone in danger, even at risk to themselves. It’s a worn-out cliché, and I’ve found it to be very true.

And the war going on now, from an Israeli Jewish vantage point, is sort of that quality played out on a national scale. First of all, of course, there are the ground troops going into Gaza. As wrong as this war is, the young combat soldiers going in to fight are risking their lives, and some of them are dying or getting very badly wounded. They are brave. And they are ready to die to save their fellow soldiers. (And I don’t blame them for this war; they were born and bred for it.) I don’t think there can be many Israeli Jews today, no matter their political opinions, who, if they think about these soldiers, can help being moved by them and caring for them. 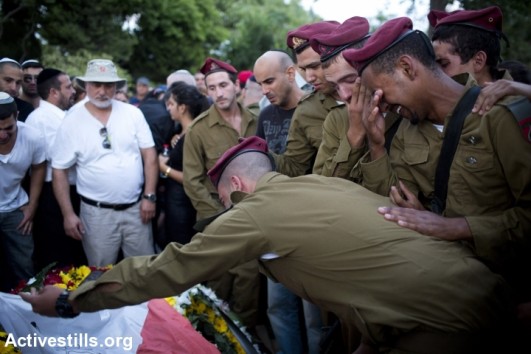 And Israelis’ instinctive readiness to help in a time of need is coming out abundantly across the home front, across Israeli society at large. One tiny example: This morning I went to the neighborhood grocery store and they’ve got a box for people to donate sanitary wipes, underwear and other items for the soldiers stuck for days and nights in the field. They have another box to donate nuts and cookies and stuff for the shiva, the seven-day Jewish mourning period, for a soldier in Modi’in who was just killed.

This is a very emotional experience. Most Israeli Jews have family members or friends in Gaza; I do, too. But even for those who don’t, everyone is just surrounded by this story of young guys going in to risk their lives, and not a few of them dying, and seemingly the whole country truly, to one degree or another, everyone in his or her own rhythm, worrying for the living and mourning for the dead. You see 30,000 people going to each of the funerals of these two “lone soldiers” from America who had no family in this country, Max Steinberg and Sean Carmeli – it is stunning. This society is glowing with tears. Hearts are bursting.

And this is sort of the problem: It’s like the agony of love – it’s the worst but it’s also the best. This is Israel at its best – brave, sacrificing, caring, loving. The tears. It’s so warm. We are a great big family. We are.

And when do we know it best? In war. And because we have so many wars, we have so many of these great national lovefests, these tragic/heroic communal sagas. We’re good at it, very good, great. And it’s not a show – the media may kitsch it up, but they don’t have to – this is real. The soldiers are real, the deaths are real, the reactions of people are real. For an Israeli Jew, it’s extremely hard to resist being part of it. And at the emotional level, why should one try?

But there are at least a couple of conditions attached to this communal experience: One, there can be no reminders of what we are doing to the people in Gaza. The media have to give it a little bit of time or space, tucked away, for appearance’s sake; they seem clearly apologetic about this. Nobody, but nobody, in the communal embrace wants to see or hear about the Palestinians in Gaza. 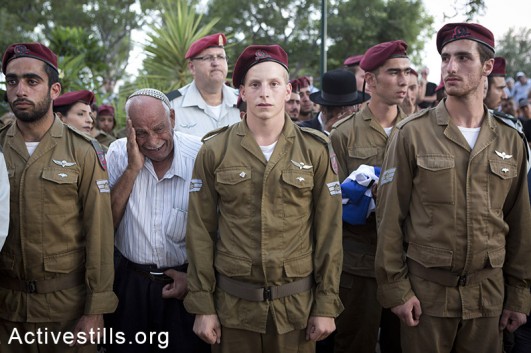 The other condition is that no one may ask whether the cause these soldiers are fighting for – this war – is right or not. Whether we, Israel, could have prevented the deaths. Whether we, especially we parents, are even just partly responsible for getting more than a few of our soldiers killed.

Nobody can ask that question, not in public; he will be shouted down angrily. He will be silenced.

And so this display of what’s best in Israel goes hand-in-hand with the demonstration of what’s worst in it: The conformism, the robotic thinking, the blind obedience, this fucking lemming-like quality. You hear people repeating it in the media like an oath – we believe in our soldiers, we believe in the mission, we believe in our leaders.

War brings out the best in Israel, and the worst. But it’s the worst qualities that allowed this war to happen in the first place, and that are preparing the ground for the next one. Wouldn’t it be nice if Israelis could devote a little of their courage to the contemplation of breaking ranks, and give a little of their compassion to the Palestinians? Maybe then they could find a better arena for their awesome bravery and generosity than one war after another after another.

Related:
‘Finish the job’
This was a war of choice. Netanyahu’s choice
How can you possibly oppose this war?