Thousands of Palestinians participated in the March of Return on Tuesday, gathering at the site of the destroyed village of Al-Kabri in the Galilee. Below is a translated transcript of the speech given by Anat Matar, a member of the Israeli Committee for Palestinian Prisoners, at the event. I am profoundly grateful for the opportunity to speak to you today.

We — the entire Palestinian public and the Jews who wish to join them in building a state for all its citizens — are sticking with the truth. It’s the main goal of the march of the displaced. It’s the goal of events marking the Nakba. The stories of the destroyed villages, the depopulated towns, the demolished cultural centers, the vanished way of life, the killed, wounded and displaced, those whose lands were stolen and who can’t return — these are the stories we must tell, and which we must fight to correct.

But the truth is also that the Nakba continues. We see it this year more than ever in the sweep of home demolitions: in Umm al-Hiran, al-Araqib, Qalansuwa, the Jordan Valley, the south Hebron hills, and beyond. This process is systematic and intentional. Exactly a month ago the “Kaminitz Law” passed in the Knesset, which allows for home demolitions to be expedited and for Palestinians — whose towns have no master plans — to be incriminated. Instead of recognizing land theft and attempting to rectify it, Israel continues its policy of robbery and oppression. The Zionist state has never recognized its Palestinian citizens: it recognizes them neither as citizens nor as Palestinians. As citizens, Palestinians are discriminated against in every area: education, the courts, securing work, public transportation and civic services, rights granted to non-citizen spouses of Israeli citizens, allocation of land to regional councils, and of course in the planning and building of new communities. Palestinian citizens are also discriminated against in how crime within Arab communities is addressed, particularly in the disturbing phenomenon of the murder of women. This is a further aspect of the state’s denial of Palestinian citizens’ existence — citizens it is supposed to protect.

Even worse is that the police and the state not only fail to protect Palestinians, they also incite against them and — as we learned time after time this year — present them as an enemy, whether in the racist statements from the prime minister, the internal security minister or the police commissioner, regarding the wave of wildfires and the events in Umm al-Hiran.

We are already seeing the flip side of the state’s refusal to recognize its Palestinian citizens: the refusal to accept their identity, and the harassment of Palestinian political actors. The outlawing of the northern branch of the Islamic Movement — along with all its religious, welfare and educational services and the media outlets it operated — is the sharpest and most terrible expression of this attitude. 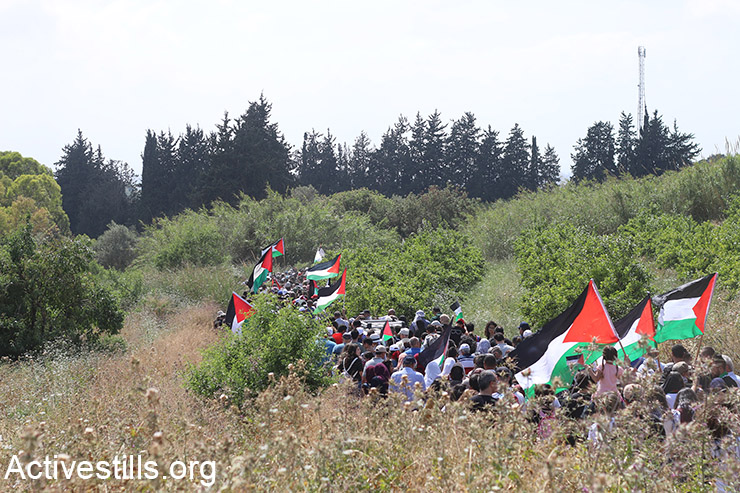 The repeated harassment of Palestinian artists is a further manifestation of this refusal to accept Palestinian society as Palestinian, and the refusal to allow this society to tell its own stories, to organize its own religious affairs, welfare and education, and to develop its own language, values and culture. The Al-Midan Theater and the poet Dareen Tatour have both been victims of such harassment.

Discrimination against Palestinian political prisoners is also connected — above all those who are citizens of the state. The prisoners’ hunger strike, which is now in its third week, calls on us not to forget these people, some of whom have been in jail for more than 30 years — among them my dear friend Walid Daka, whose release I expect with every passing day.

We are living in fraught times of regression rather than progress, in which the populist and violent Right’s power is increasing the world over. But we cannot give up hope, nor on practical efforts to realize it. And so I want to call out from this stage today:

No to home demolitions! No to incitement against the Palestinian population! No to political arrests!

Yes to the return of the displaced! Yes to the release of political prisoners! Yes to a policy of justice, recognition and equality!

Anat Matar is a senior lecturer in philosophy at the University of Tel Aviv, and a member of the Israeli Committee for Palestinian Prisoners. This post was originally published in Hebrew on Local Call. Translated by Natasha Roth.