Mohammed Abu Sakha has devoted his life to helping children throughout the West Bank as a clown and circus performer and trainer. He has been held without charge by Israel for three months, and as a result, the program for special needs children he was running has closed. 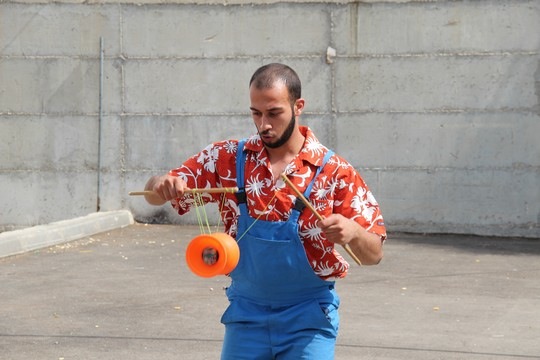 Three months ago, as Mohammed Abu Sakha was driving to visit his parents near Jenin, and passed the Za’atara checkpoint, he was arrested by soldiers . Not long after, he was put under administrative detention, held without charge or trial. He has since been held in Israel’s Megiddo prison.

Abu Sakha is a clown. He operates the Palestinian Circus School in the West Bank, teaching circus performance to Palestinian children. Abu Sakha started learning the art of circus nine years ago, when he was 14 years old, and since then, it has become his entire life. He lives near the circus and spends his entire day working there. He is also busy writing his book there about how to teach therapy for special needs children through the art of circus.  His friends say that children that didn’t know how to take a step when they met him can now walk thanks to him.

The Palestinian circus is one of the rare pearls found in the painful reality of life under occupation. In addition to the circus shows, which attract visitors from around the world, they also operate a circus school in which 340 children from the area of Ramallah and Bir Zeit participate, among them 40 special needs children. For these kids, the circus is not only a refuse from the daily hardships, but also therapy.

Abu Sakha no longer gets to the circus and the children are showing up less. As a result, the program for special needs children has closed in lieu of a replacement. There are normally only six teachers at the circus school. Now it’s down to five.

This isn’t his first time in jail. Abu Sakha was arrested seven years ago, when he was 17, for 28 days on the charge of throwing stones at a jeep. His parents paid NIS 2,500 to release him. According to his friends, the stone throwing incident actually took place when he was 13 years old.

According to Abu Sakha’s lawyer, he was barely investigated by the police for general charges, all of which he denied. Asked for comment, the IDF Spokesperson said that “Mohammed Abu Sakha has been under administrative detention since December 14, 2015 for his involvement in the Popular Front for the Liberation of Palestine, which according to confidential military intelligence that reached the Israeli court, makes him a severe security threat. His administrative detention was implemented as per law and as the last resort since no other option for neutralizing the threat he poses was found.”

His friend deny this claim, saying he has no connection to the Popular Front, and even if so, then why not put him on trial. “If you are a Palestinian, you go through a checkpoint every day, you are humiliated by soldiers every day. We are people, we have feelings, we see, we hear….Abu Sakha is not a political person. He hasn’t even been to a protest. His life is the circus,” one friend said.

During a hearing in an Israeli military court, Abu Sakha responded to the obscure claims against him. “I am a circus performer. I am a clown. I have traveled around Eruope and met with all kinds of people, Palestinians, Israelis, Americans. I have no intention of engaging in violent acts.”

Since his detention his family has been barred from visiting him. After many efforts, only two days ago his mother was allowed to join a Red Cross bus and visit him in jail. His father was not allowed. Without any reason, according to the family. His mother said that the prison guards and soldiers scream at the parents who go to visit their children, humiliating them.

Abu Sakha told his mother he is being held along with minors, only 13 and 14 years old, with no separation between them and the adults. Abu Sakha also told her he is running a small circus inside the jail, performing for and teaching the kids, trying to give them the feeling they are in a summer camp, and doing everything possible to raise morale. You can take the clown out of the circus, but you can’t take the circus out of the clown.

A protest was slated to take place Wednesday outside the prison in solidarity with Abu Sakha and in protest of his detention.  Similar protests were held in Brian, Uruguay, Argentina, Spain and France, all calling for his release.

Another court hearing is slated to be held on March 21, following an appeal filed by Addameer, the Palestinian Prisoners’ Rights Group. Let’s hope the officers that decide his fate take into consideration all the good that Abu Sakha brings to such an unbearable reality.