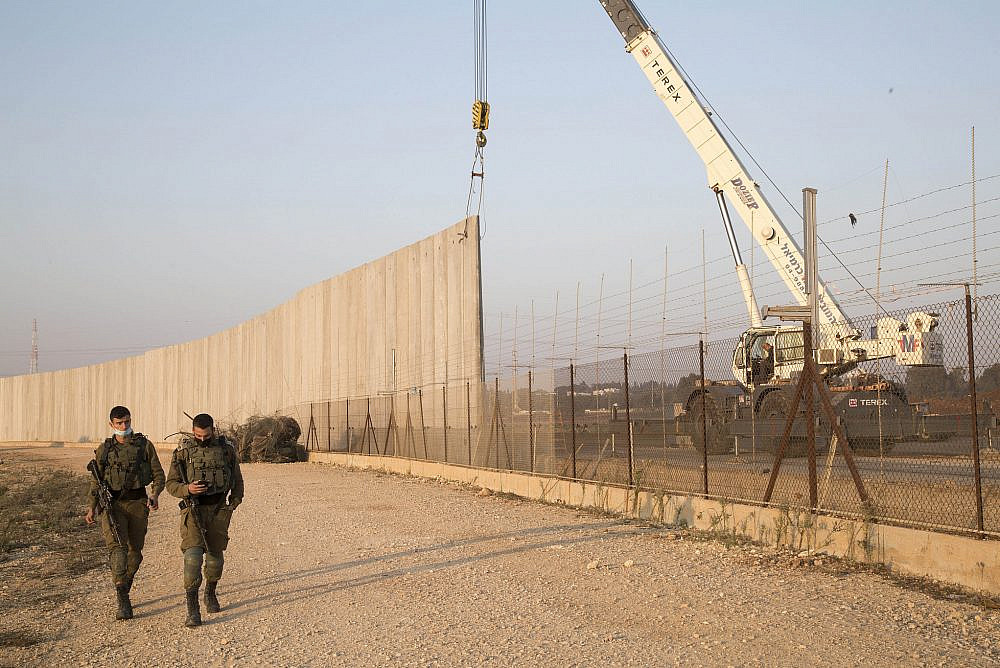 Israeli authorities installing a new section of the wall around Qalqilya, occupied West Bank, replacing the existing fence which has several holes created by Palestinians for crossing into Israel for work, January 10, 2021. In 2004, the International Court of Justice stated that the West Bank wall is "illegal and must be dismantled." (Keren Manor/Activestills)

This has been a difficult and bloody year for Palestinians, who have endured the deadliest twelve months in the West Bank since 2005 along with continued marginalization on the international stage. The United Nations General Assembly has, though, offered them one last-minute win, by setting-up a high-stakes ruling from the International Court of Justice (ICJ) on the legality of Israel’s prolonged occupation of the Palestinian territories. The Dec. 30 vote by member states also requested that the court outline the responsibilities that countries have to bring the occupation to an end, which Israel has deeply entrenched since 1967. The court’s answer could come as early as the summer of 2023.

Palestinian officials and international law experts had been contemplating such a step for several years. But the decision to proceed seems largely dictated by President Mahmoud Abbas’ growing frustration with the current diplomatic inertia, U.S. disengagement, and the election of a far-right government in Israel. While the non-binding advisory opinion risks falling short of Palestinian expectations, it may nonetheless represent an important milestone in efforts to hold Israel to account for its decades-long violation of Palestinian rights under international law.

The ICJ is the UN’s main judicial body, based in The Hague. Established in 1945, it is composed of 15 judges elected by the General Assembly and the Security Council. The court rules on disputes between states, and can also provide advisory opinions on questions of international law.

This differs from the International Criminal Court (ICC), also based in The Hague, which tries individuals for international crimes such as genocide, war crimes, and crimes against humanity under the Rome Statute. Since March 2021, the ICC has been pursuing its own protracted investigation into possible war crimes committed in the occupied territories, and will undoubtedly draw on the ICJ’s deliberations. 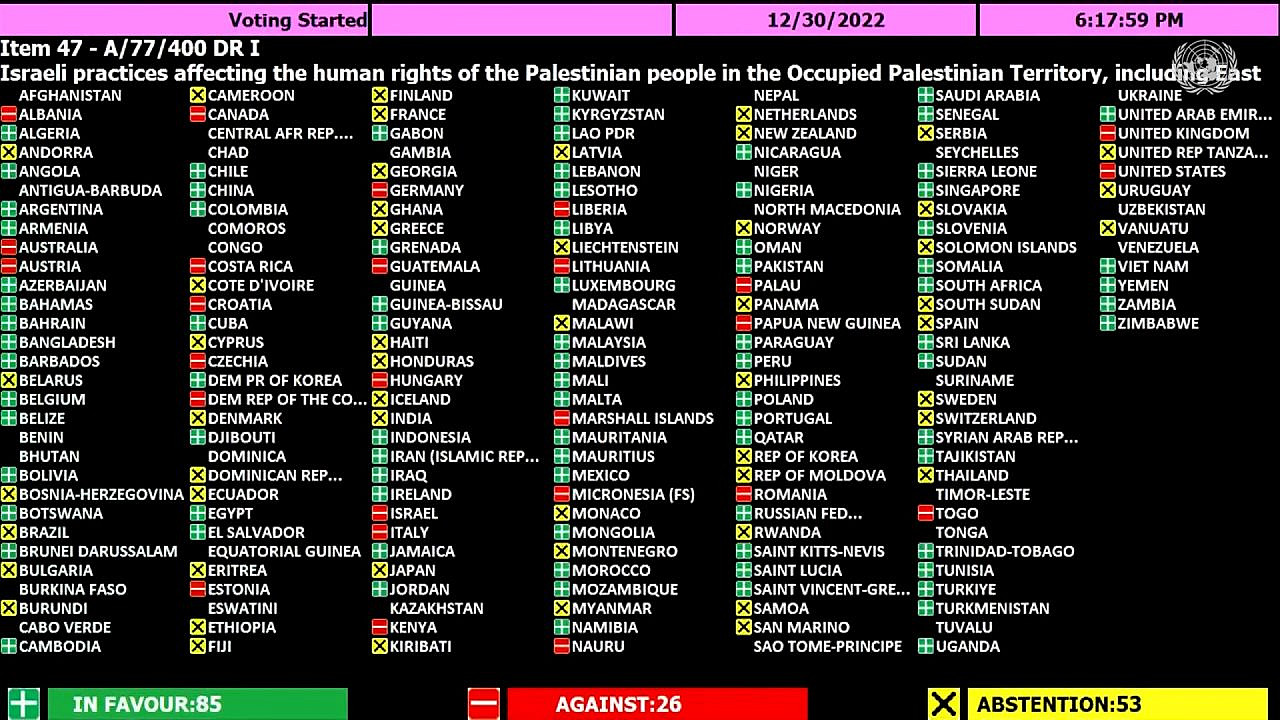 Screengrab of the results of a UN General Assembly vote on referring Israel’s occupation of the Palestinian territories to the International Court of Justice in The Hague, December 30, 2022.

This is not the first time the ICJ will delve into the Israeli-Palestinian conflict. In a landmark opinion in 2004, the court found that the construction of Israel’s separation wall in the West Bank and its associated legal regime had de facto annexed occupied territory, impeding the Palestinian people’s right to self-determination. As a result, the ICJ judges called on Israel to dismantle its barrier, and to provide compensation to Palestinians as determined by the UN Register of Damage (UNRoD). Israel has refused to comply with the past ruling, and even attacked the latest referral as a Palestinian “weapon of mass destruction in their jihad war of Israel demonization.”

The United States and European countries such as the UK and Germany, which voted against the referral, argue that it would be inappropriate for the ICJ to insert itself into a bilateral dispute without Israel’s consent on such a highly contentious issue. This has become a standard argument that was also deployed in the 2004 opinion, and again in 2019 in a different case, when the General Assembly asked for an ICJ opinion on the legal consequences of the UK’s continued control over the Chagos Islands in the Indian Ocean (which the UK severed from Mauritius, before granting the latter independence in 1968). Court judges have consistently and overwhelmingly rejected such political arguments, and can be expected to do so again.

Opponents also claim that ICJ (and ICC) referrals harm the prospect of relaunching Israeli-Palestinian negotiations and reaching a two-state solution. Yet the ICJ’s first ruling in 2004 did not prevent subsequent talks, including in the lead up to the 2007 Annapolis conference, during which progress on final status issues was made. Since then, prospects for a meaningful peace process have vanished amid the erosion of the two-state solution, in great part due to Israel’s unchecked settlement activity and dispossession of Palestinians. These negative dynamics are set to accelerate under Israel’s new government.

Set against the backdrop of Russia’s war on Ukraine, Western opposition to Palestinian recourse in international law is even more disingenuous. Europe in particular has enthusiastically promoted international norms in its pushback against Russia’s invasion and annexation of Ukrainian territory. This includes far-reaching sanctions along with an EU proposal to set up a special tribunal to prosecute Russian crimes in Ukraine. Western states have also supported Ukraine’s own ICJ proceedings against Russia. 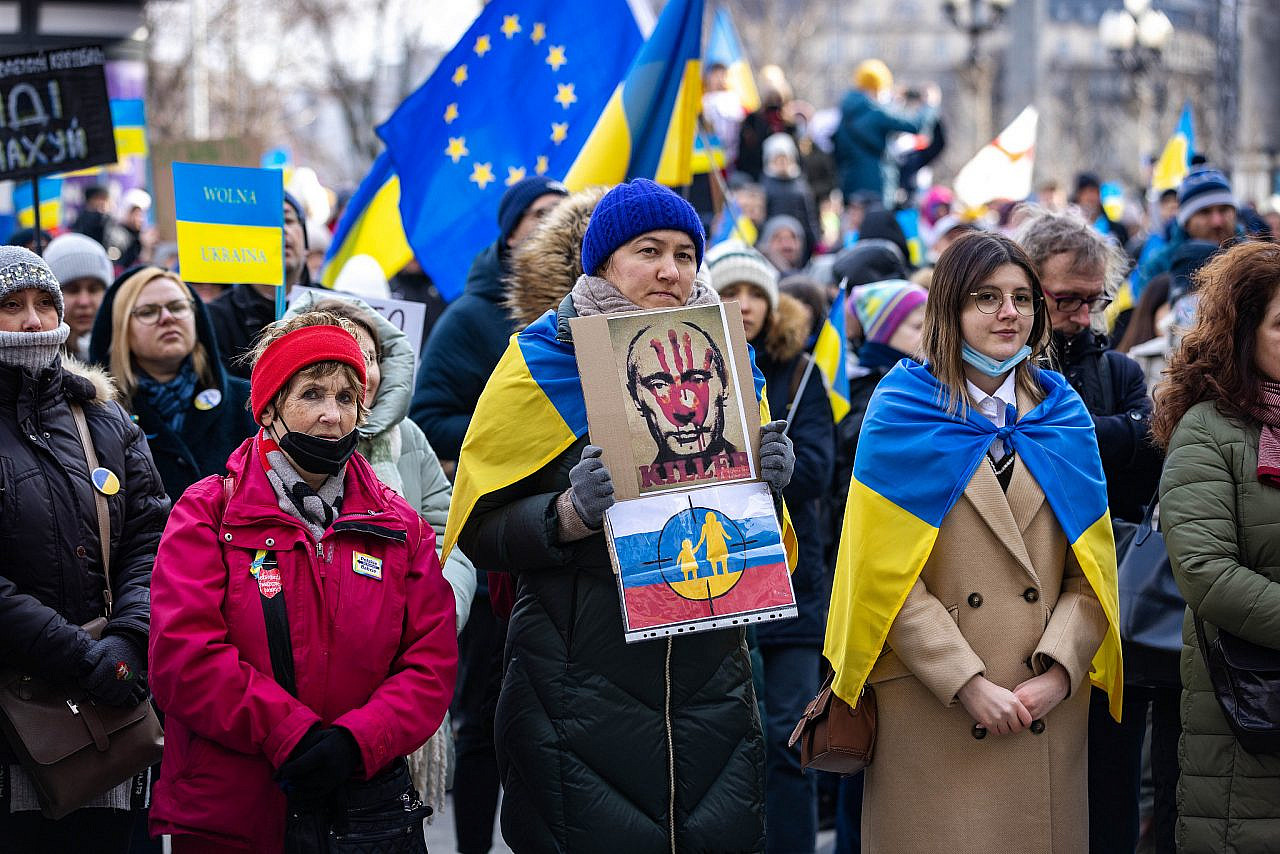 How will the ICJ vote this time?

There is, of course, no way to know for sure what the ICJ will decide. But its past jurisprudence in similar cases hints at both risks and opportunities for Palestinians.

Take, for instance, the ICJ’s current bench of judges – two of whom have in the past argued against judicial interventions. During the Chagos hearing, the U.S. judge, Joan Donoghue, argued that the ICJ should abstain because the UK had not consented to a “judicial settlement” of its bilateral dispute with Mauritius. While a lone view at the time, she has since become the court’s president.

Similarly, French Judge Ronny Abraham, in his former capacity as France’s legal representative, urged the ICJ to abstain in the 2004 wall hearing because it would not be “conducive” to resuming dialogue. Although these views may not sway a majority of judges, Israel will undoubtedly seize upon any such dissention to challenge the authority of a future opinion.

When it comes to substance, the court might extend its previous finding of de facto annexation to encompass, at the very least, all of Area C (nearly 60 percent of the West Bank) given the significant extension of settlement infrastructure and Israeli domestic legislation to the area since 2004. However, it is less clear whether the court would go as far as describing this as de jure annexation absent an official proclamation of Israeli sovereignty, or a formal end to Israel’s military administration of the territory. 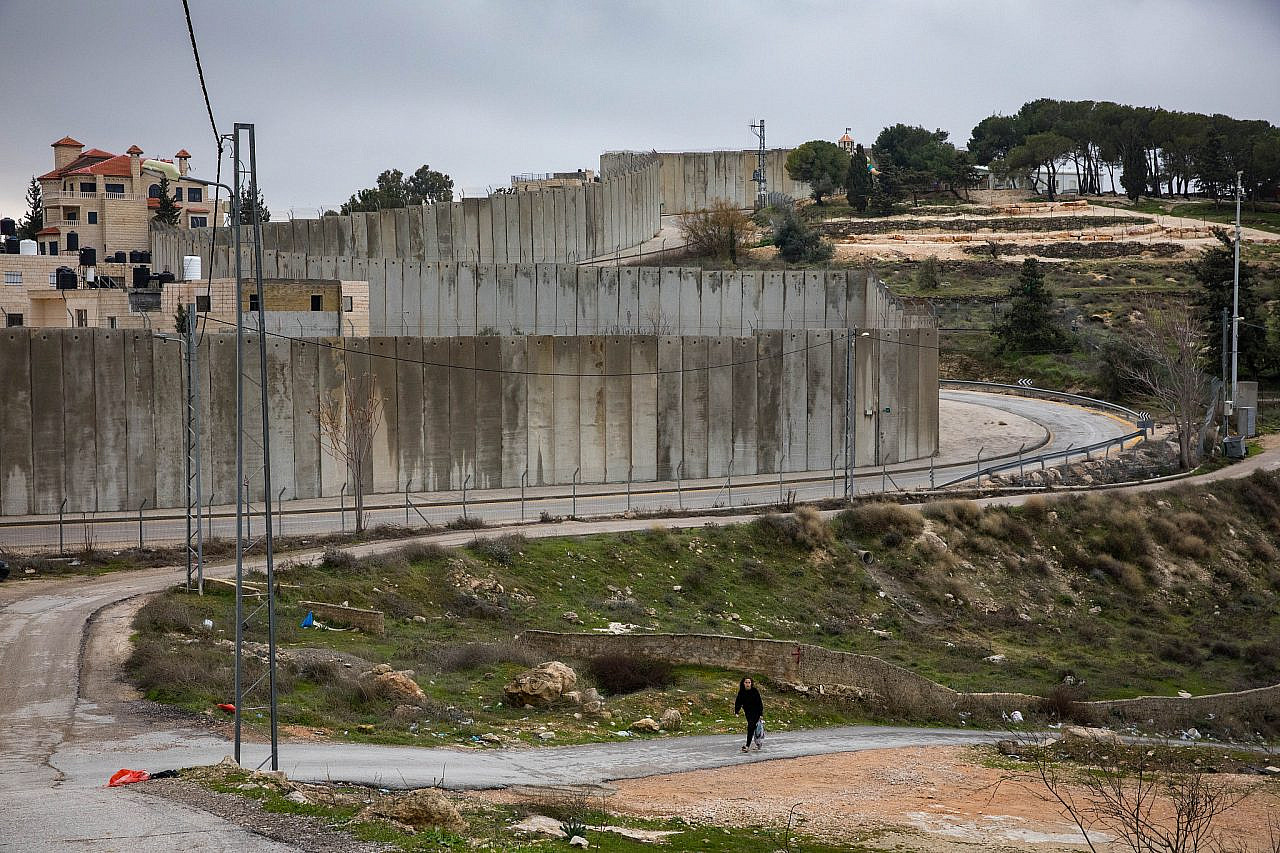 An even bigger unknown is whether the ICJ chooses to echo the growing conclusion of leading human rights organizations and international law experts, including the UN Special Rapporteur on the occupied territories, that Israel has imposed a system of apartheid against Palestinians. Opting not to do so would undoubtedly energize Israel’s campaign to smear those using such terminology as antisemites.

Yet the court could still pull the carpet from under the feet of Israel’s occupation by determining that its prolonged control is neither temporary nor justified by military necessity, and has thus become illegal — requiring it to immediately end the occupation. This would follow past opinions in other cases, such as its 1971 finding that South Africa’s presence in Namibia, where it replicated a system of apartheid, was illegal and needed to end immediately. Likewise in 2019, when it called on the UK to terminate its “unlawful administration” of Chagos and return the territory to Mauritius.

It is on the question of state responsibilities, though, where Palestinians may be most underwhelmed. The court has historically shied away from delving too deeply into this issue, preferring to leave the matter to the General Assembly and Security Council. It is therefore highly unlikely to accede to Abbas’ demand for a UN “regime for the international protection of the Palestinian people.”

Instead, as it did in 2004, the court may limit itself to a general call for member states to cooperate with the UN to end the unlawful situation created by Israel. With this in mind, it can also be expected to reaffirm the duty of third states to not recognize or assist such violations of international law. This legal principle is enshrined in UN Security Council Resolution 2334, and is a longstanding cornerstone of the EU’s policy of differentiating between Israel and its settlements. 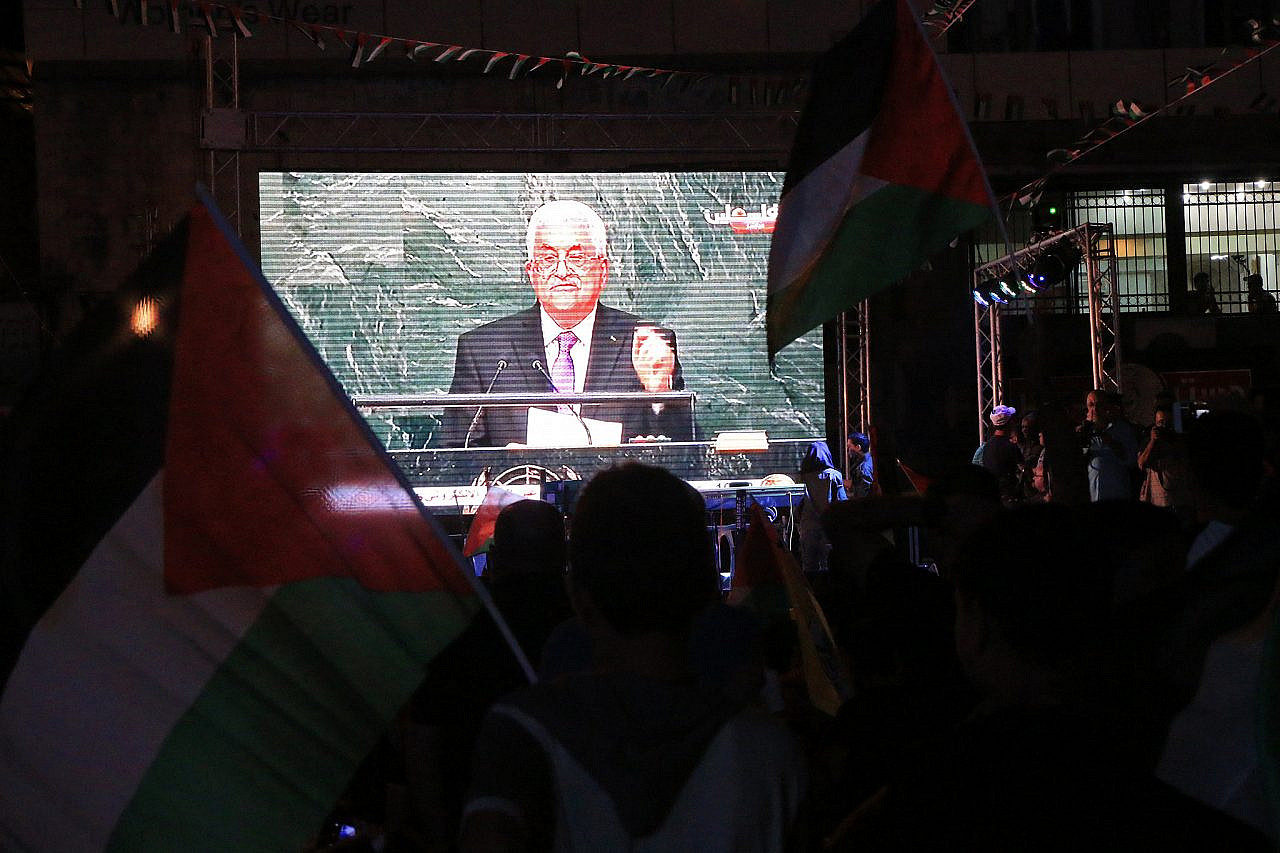 Palestinians wave their national flags as they watch a live-screening of President Mahmoud Abbas’ speech followed by the raising of the Palestinian flag at the United Nations headquarters in New York, in the occupied West Bank city of Nablus, September 30, 2015. (Ahmad Al-Bazz/Activestills)

The ICJ cannot compel Israel to end its occupation through its advisory opinion. International law enforcement ultimately lies with UN members, especially those with a seat on the Security Council. But instead of heeding the Court’s first ruling, the United States and European states have sought to protect Israel’s settlement project from any and all international accountability mechanisms — not just the ICC and ICJ, but also the UN Human Rights Council’s database of businesses with ties to the settlements. Palestine’s return to the ICJ, the court of last resort, some 20 years later, is in itself an indictment of the West’s continued failure to hold Israel to account for its unlawful behaviour.

Although international will is badly lacking today, historical precedents may offer some comfort to Palestinians when it comes to future developments. The ICJ’s 1971 ruling dealt a serious blow against South Africa’s illegal claims to Namibia and, while it took almost another two decades, did ultimately spell the demise of the apartheid regime through which it subjugated the territory and its people. And even with the balance of international power firmly in its favour, the UK’s rejection of the Court’s 2019 ruling proved increasingly untenable. London has eventually, even if grudgingly, been forced to open talks with Mauritius to hand over the Chagos Islands. With time, the accumulating weight of international legal reprobation may prove just as inescapable for Israel.