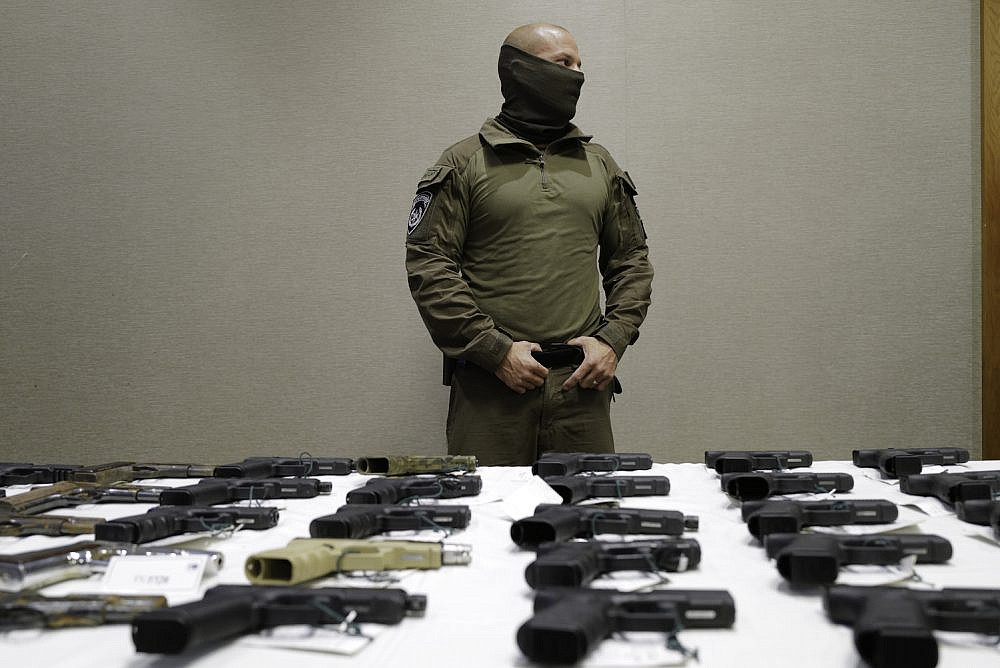 An Israeli police officer seen looking over a display of confiscated illegal weapons during a ceremony following the largest ever police operation against illegal gun dealers, Nazareth, November 9, 2021. (Michael Giladi/Flash90)

On Sunday night, a shooting attack in the Israeli city of Hadera left two police officers dead and several more people injured. It was the second attack in Israel linked to the Islamic State group in less than a week, after four people were killed in a stabbing and car-ramming attack last Tuesday in Be’er Sheva. The photos and videos released last night by the police show that the two perpetrators arrived at the scene in Hadera with an enormous amount of firearms and weapons. After the incident, which ended when undercover Border Police officers killed the two attackers during a shootout, Israeli military commentator Yoav Limor wrote in the right-wing Israel Hayom daily that the attackers had “slipped under the Shin Bet’s radar.”

However, according to testimony from a former senior Shin Bet official, the security agency’s radar was simply not aimed at them. “The Shin Bet rarely deals with Israeli Arabs,” the official told Local Call writer and +972 contributor Suha Arraf in an interview for a series on organized crime in Arab society in Israel. “If it is not terrorism against Jews or attacks on ideological grounds, they’re not interested. They won’t deal with organized crime, nor with [the proliferation of] weapons within the Green Line.”

For years, Palestinian leaders in Israel have been calling on law enforcement to address the deadly scourge of illegal weapons in Arab communities. They even went on hunger strike for three days in front of the Knesset demanding that the authorities take action to confiscate those weapons. The state comptroller referred in a special report to the scandalous incompetence of the security forces in preventing the spread of illegal firearms in Arab communities, but in vain. So long as the victims of these weapons were exclusively Palestinian citizens, the matter simply did not interest the Israeli authorities.

According to figures from Aman: The Arab Center for Safe Society, more than 1,600 Palestinian citizens have been murdered since 2000 in circumstances related to violence and crime. Twenty people have been murdered since the beginning of 2022 alone, the last of whom — 28-year-old Jalal Abdel Qader Abu Elion — was killed two nights ago in the Bedouin town of Tel as-Sabi in the Naqab/Negev. His name, we can assume, will be forgotten along with the names of every other murdered Palestinian citizen, whose deaths are never of interest to the authorities. Even when these authorities have supposedly acted to address this deadly phenomenon, “crime eradication” has turned into a pretext for tightening control over Palestinian citizens, not a means of protecting them.

Where the protestations by Palestinian citizens failed, the two attackers succeeded by aiming their weapons not at other Arabs but at Jews — and Jews in uniform (it is doubtful that the attackers would have known that one of the police officers they shot and killed was Druze). This time, the police rushed to invade the Palestinian city of Umm al-Fahm, where the two attackers lived, to conduct extensive searches, confiscate weapons, and arrest suspects. 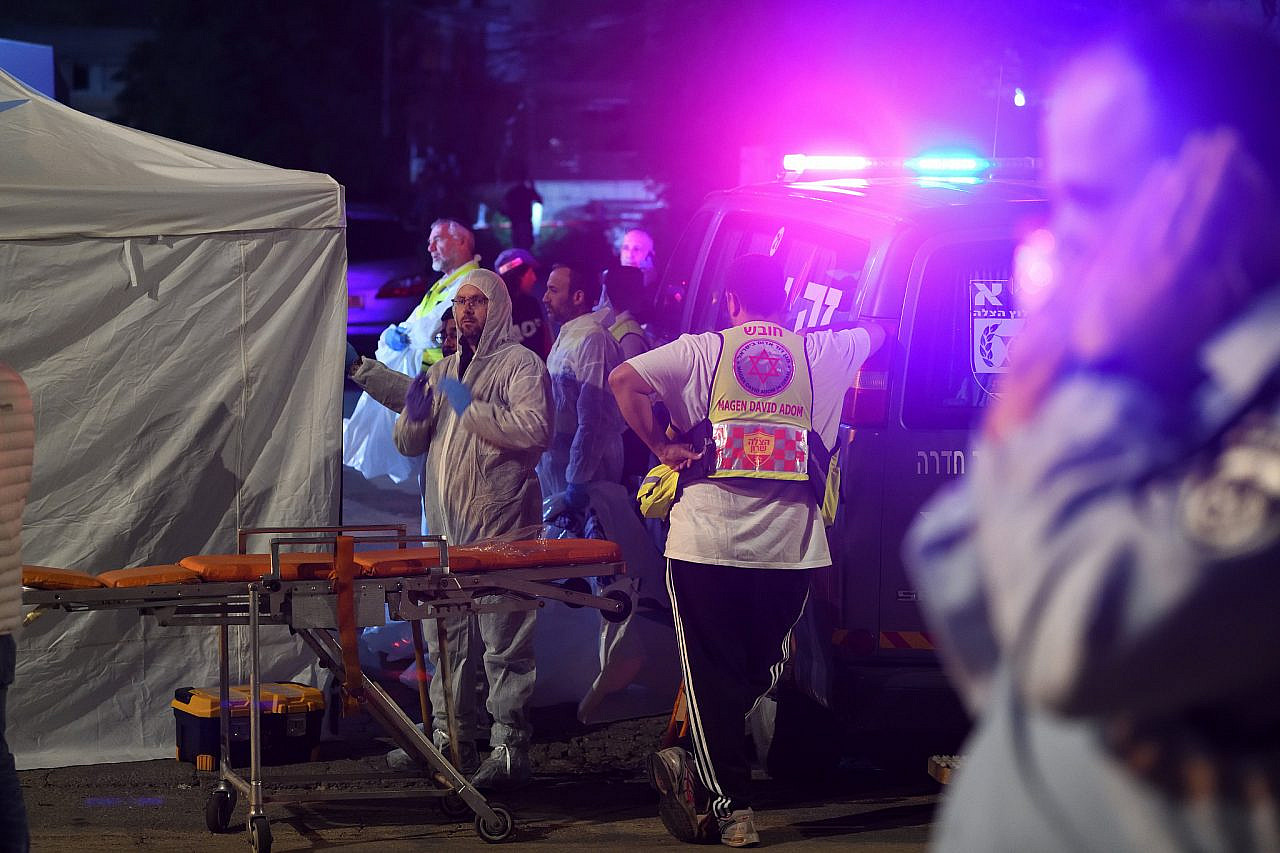 Israeli security forces and emergency response personnel at the scene of the attack in Hadera, March 27, 2022. (Gili Yaari/Flash90)

It is hard not to see this conduct as part of the doctrine of “enemy aliens,” a term the Palestinian legal center Adalah uses to describe the state’s relations with its Arab citizens. According to this doctrine, Israel maintains the right to suspend the law in cases where the victims belong to the group identified as “enemies,” such as in the case of the fatal police shooting of Yacoub Abu Al-Qi’an in Umm al-Hiran, whose file investigating his death was closed. Moreover, according to this doctrine, as long as those “enemy aliens” are killing each other, the state will not intervene and thus forces Arab society to deal with this awful proliferation of weapons.

The fact that these firearms have finally been directed at Jews should come as no surprise. Experts warned of this possibility years ago. Yet this is not the reason why the state must address this deadly phenomenon. Not only because these kinds of attacks can also be carried out with the help of a car or a knife, but also because the state is obligated to protect the lives of its Palestinian citizens just like the lives of its Jewish citizens.

In response to the shooting attack in Hadera, the head of the Joint List, Ayman Odeh, said: “Every attack on a citizen is an attack on a whole world and everything in it. What happened in Hadera is an abomination that deserves every condemnation. This is not the way of the Arab population, and we call on our public to struggle democratically. We have struggled for many years against unauthorized weapons. These wretched weapons must be confiscated. We want to live in a society without weapons.”

There has been wall-to-wall, unequivocal condemnation from the Palestinian leadership in Israel of the last two attacks. Yet still, many on the right have seen it as an opportunity to reinforce the perception of Palestinian citizens as enemy aliens and to call for a variety of collective punishments against them.

The question, ultimately, is what does Israel want? If it wants to continue remaining indifferent in the face of the deadly proliferation of crime and firearms in Arab localities, it better be ready to openly acknowledge that these weapons may also be directed at Jews. But if it wants to protect the lives of all of its citizens, it should listen carefully to Odeh’s words, and the constant protests by Palestinian citizens, to take these weapons off the streets and to ensure Palestinian equal rights in full: as citizens of the state, not as enemy aliens.