In attempting to hold off European plans to label West Bank settlement products, Israel could easily overplay its hand. The Netanyahu government’s bunker mentality will only increase international isolation. 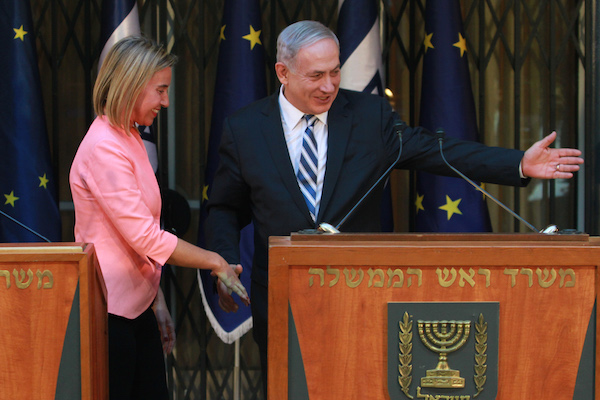 It’s pretty difficult to find a minister in the Israeli government who will go on record supporting a two-state solution in any sincere terms these days. Of course we want a Palestinian state, they say, but god forbid we hand over control of the West Bank and withdraw our troops.

Prime Minister Benjamin Netanyahu, has been saying as much for years. “I think the Israeli people understand now what I always say: that there cannot be a situation, under any agreement, in which we relinquish security control of the territory west of the River Jordan,” Benjamin Netanyahu said last summer, long before his now-famous dis– and subsequent re-avowal of the two-state solution.

It’s pretty clear these days that the status quo of occupation — and all it entails — is here to stay for the time being. There is no peace process, nor is there any reason to think a new peace process could succeed as long as the current Israeli leadership is in power.

In an interview laying out her strategy to fight EU labeling of settlement products, a strategy that might sound absurd to someone unversed in the absurdity of Israeli intransigence vis-à-vis the occupation, acting Israeli foreign minister Tzipi Hotoveli told the Times of Israel:

The EU wants to make the point that the West Bank is not a part of Israel, she said. But according to the official policy of the Israeli government, “[Handovers of] Judea and Samaria (the West Bank) aren’t even on the list of options we’re offering the Palestinians,” she announced. Prime Minister Benjamin Netanyahu, while professing to support the creation of a Palestinian state in principle, “never said that the evacuation of Judea and Samaria is an option. He says we learned the lessons of the [2005 Gaza] Disengagement and that the world needs to get used to this idea. That’s one of the messages that I place great emphasis on.”

The world needs to internalize that the West Bank is to remain under Israeli “de facto sovereignty,” Hotovely said. “It’s not a bargaining chip. It does not depend on the Palestinians’ goodwill. It’s the land of our forefathers. We don’t intend to evacuate it, certainly not for the Islamic State or al-Qaeda or other extremist organizations that would sure to gain control over the territory.”

Yes. You read that correctly. A handover of the West Bank isn’t negotiable, there will be no sovereign Palestinian state, and the rest of the world just needs to get used to it.

Never mind how far the European Union has been bending over backwards — the type of contortions that should raises serious doubts as to the integrity of its spine — in order to reassure Israel that accurately distinguishing products from illegal West Bank settlements is not a boycott of Israel itself. There’s a bit more to the story.

Europe is selling settlement labeling as nothing more than an overdue implementation of EU law requiring the distinction between goods manufactured inside Israel proper, with which the EU has a free trade agreement, and those manufactured beyond its borders, i.e. in its West Bank settlements. That narrative is not inaccurate, but it is also not the whole story.

Labeling settlement products is just one part of an EU’s attempt to advance the two-state solution through a series of carrots and sticks. The sticks involve punishing Israel for continued settlement expansion, first by targeting the settlements and settlers themselves, but which could ultimately threaten central aspects of the free trade agreement between Israel and the European block. To put the consequences of such an eventuality into context, as a bloc, the EU is Israel’s largest trading partner.

Along with the sticks, of course, are carrots — incentives for peace. The largest of those incentives for reaching a two-state solution is near-full economic integration into the EU, akin to the status of Switzerland and Norway. Needless to say that for an export-reliant market like Israel’s, the economic benefits of such integration would be game-changing, to say the least.

Israel has thus far rejected the very idea of EU rewards for peace. (The U.S. essentially bribed both Israel and Egypt, and Israel and Jordan for the peace agreements it brokered between them, respectively.)

Deputy Foreign Minister Hotovely even threatened that Israel will counter with its own punitive measures toward European countries that implement settlement labeling rules. “They, too, have something to lose,” she said in the Times of Israel interview.

The consequences she is threatening, however, are nothing short of laughable. Any country that labels West Bank settlement products will lose its influence in the peace process, according to Hotovely’s plan, which one can safely assume came directly from the desk of her boss, Foreign Minister Benjamin Netanyahu.

Such an attitude illustrates the bunker mentality afflicting the entire Israeli government — and most of the opposition, for that matter. The more pressure levied against Israel to end the occupation, only one symptom of which is the settlements, the more Israel raises its middle fingers to the world.

But the world, and in this case, the EU, is losing patience with sexagenarian Israel’s teenage attitude. France is just waiting to set a deadline for ending the occupation in the UN Security Council, and the EU has far more punitive measures ready and waiting for decision-makers to sign off on.

More significantly, the pressure coming from regular citizens and civil society groups to end the occupation is growing rapidly and constantly. The BDS movement is moving fast on boycotts and divestment, sometimes of settlement companies and sometimes of everything and anything Israeli. If the Israeli government’s refusal to even consider ending the occupation continues for much longer, the S in BDS might just become a real thing.