At least 34 Palestinians were killed Thursday when the Israeli air force bombed Gaza for a second day after a temporary ceasefire broke down and negotiators failed to reach a ceasefire agreement.

While the fate of Hamas military chief Mohammed Deif remains unknown after Israel attempted to assassinate him, and consequently killed his wife and two young children, the Israeli military confirmed that it had killed three top Hamas commanders, Raed Attar, Mohammed Abu Shamaleh and Mohammed Barhoum, in Rafah. Attar and Abu Shamaleh are thought to both have been involved in the 2006 Gilad Shalit kidnapping. Israel’s Shin Bet also believes that the Rafah division, which Attar headed, was responsible for abducting Lt. Hadar Goldin, who was killed during Israel’s ground offensive in Gaza.

Meanwhile, heavy rocket fire from Gaza into Israel’s south continued throughout the day, with a mortar attack causing damage to a protected structure, and an earlier attack moderately to seriously injuring a 33-year-old Israeli man, both in the Eshkol region. The Iron Dome also intercepted a rocket over the Modi’in area Thursday evening. 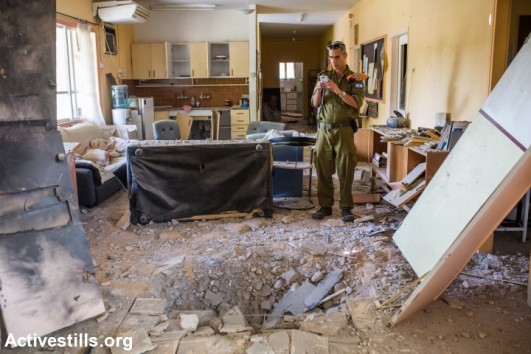 Four Palestinians in Gaza City were killed in an Israeli airstrike that targeted a cemetery in the Sheikh al-Radwan district. Ma’an reported that the victims were burying relatives who had been killed overnight by Israeli airstrikes. Since the resumption of fighting the Palestinian death toll has climbed to 2,049, according to Gaza’s health ministry.

On the diplomatic front more details have come to light on the joint German-French-British effort to broker a UN Security Council resolution to end the fighting between Hamas and Israel. Key points in a document circulated among diplomats and obtained by Haaretz include Palestinian Authority control of Gaza, a ban of unauthorized weapons sales, reconstruction of Gaza under international supervision and restarting peace talks based on the 1967 borders.

In internal Hamas politics, Ma’an reported that the group had executed three alleged collaborators with Israel and arrested seven others, a Hamas-affiliated website said Thursday.

The Israeli cabinet approved the call-up of an additional 10,000 reserve soldiers.

Related:
Palestinian teen: I was used as a human shield in Gaza
Not even a ‘bump on the wing’ these days when killing Palestinians
Netanyahu’s zero-sum war in Gaza