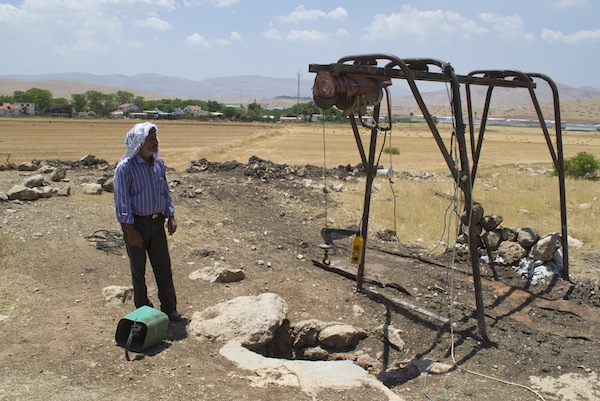 A Palestinian man looks at a well that an EU-funded project was helping reclaim before Israel ordered a work stoppage, Jordan Valley, May 21, 2013 (Photo: Michael Omer-Man)

“We are freezing the relationship on everything,” an Israeli official told The Guardian. “We did this as soon as we heard [about the directive]. We can’t act like nothing happened.”

Price tag attacks are generally perpetrated by Israeli settlers against Palestinians and their property in response to Israeli government moves against settlements. In other words, they attack an uninvolved third party in retaliation for legally sanctioned harm done to them.

Ya’alon’s order is no different. For all intents and purposes, it is a price tag attack.

As part of the Israeli Defense Ministry’s new directives, Israel will stop all cooperation, halt issuing new permits for projects and no longer issue documents allowing EU representatives to easily travel through and into the West Bank and Gaza. The new restrictions apply to EU projects but not those of EU member states, Haaretz reported.

+972 has learned of other measures taken by Israeli military officials targeting European aid workers themselves while working in Area C, not to mention the ongoing maltreatment of accredited humanitarian workers by Israel’s Interior Ministry when issuing visas.

“If there is quiet, the processes easing the lives of Gazan residents will continue. And if there is [rocket] fire, then these moves will be slowed and even stopped and, if necessary, even reversed,” National security adviser Yaakov Amidror said earlier this year.

In the West Bank, collective punishment takes the form of restrictions on freedom of movement, curfews on entire villages and night raids following protests, home demolitions of the homes of suspected terrorists and more.

These acts of collective punishment are in response to actions by Palestinians themselves, affecting other uninvolved Palestinians, unlike the latest move by Israel’s defense minister. This week’s ‘price tag’ attack by Moshe Ya’alon punishes a vulnerable Palestinian population in response to a diplomatic move by an uninvolved party, which also happens to be Israel’s largest trade partner.

An EU source in Israel told the Guardian: “We have not received any official communication from the Israeli authorities. Our delegations on the spot are seeking urgent clarifications.”

Related:
Can the EU’s settlement exclusion push the U.S. to follow suit?