It’s time to advocate for the mental health treatment and education of Palestinian children detained in Israeli military prisons. Untreated post-traumatic stress disorder will only fuel their continued hatred and aggression towards the authorities. 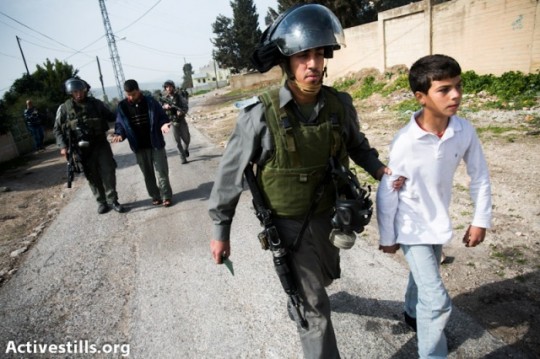 A painfully violent video went viral last month, showing two Israeli soldiers ordering dogs to attack a 16-year-old Palestinian Hamza Abu Hashem. The incident took place months earlier but the video was only circulated in March by former Knesset member Michael Ben-Ari, on the eve of Benjamin Netanyahu’s speech to Congress. Ben Ari hoped the video would teach Palestinian children a lesson, but his plan backfired. The video sparked outrage over the violence and brutality inflicted upon this traumatized teenager. In response, the IDF announced that it would temporarily discontinue using attack dogs in West Bank demonstrations.

There was a surge in media coverage criticizing IDF tactics once the world watched video of this traumatized child being bitten by an attack dog. The aftermath and next steps for Hamza and his family were not part of that discourse. The prospect of any discussion of Hamza’s fate and well-being was lost somewhere between Netanyahu’s speech to Congress and coverage of the Israeli election.

After the attack and arrest, Israeli authorities took Hamza to the hospital for his injuries, interrogated him, detained him in a military prison, and a military court fined him NIS 4,000 ($1,000). Hamza’s parents were not permitted to visit him for several weeks. He was imprisoned for three months, without mental health treatment for trauma stemming from the assault, or any option for continuing his education.

Hamza was released from prison earlier this month. He is now suffering from undiagnosed psychological trauma, according to Haaretz columnist Gideon Levy. Hamza is withdrawn, isolated, has both insomnia and nightmares, is startled by dogs barking, and is in critical need of mental health treatment, Levy reported. He has not received any psychological intervention and his family is unable to pay for private services. Hamza’s family is likely traumatized by the attack, the arrest, and their concern for his well-being and mental heath subsequent to the severe physical and psychological abuse he experienced before and during his incarceration.

The time has come not only to watch and talk about videos like this, but also to take action. Now, while the new government is being formed by presumptive Prime Minister Netanyahu, the public should begin advocating for the mental health treatment and education of Palestinian children detained in Israeli military prisons. Untreated post-traumatic stress disorder due to physical abuse in these youth will only fuel their continued hatred and aggression towards the authorities.

In contrast, Israel utilizes an entirely different, civilian legal system for Israeli youth, including those living in West Bank settlements, sometimes only hundreds of meters from Palestinian villages. If arrested, the Israeli authorities provide Jewish Israeli children with the option to attend alternative-to-prison programs including continued education, mental health treatment, and detention prevention. Israelis are not tried under military law in military courts, and they are certainly not sent to military prisons.

UNICEF recently issued a follow up report in February 2015 (previous report in March 2013) on breaches of international law and human rights violations pertaining to Israel’s treatment of detained Palestinian youth. This document notes that Israeli authorities have made few improvements, per recommendations of the March 2013 report. While the IDF did create several new orders, they failed to put the majority of them into practice, meaning that the maltreatment of children continues and is systematic and pervasive within the Israeli military detention system.

Earlier this year, Jewish and Arab social workers of Ossim Shalom-Social Workers for Peace and Social Welfare issued a statement demanding that Prime Minister Netanyahu, Jerusalem Mayor Nir Barkat, and the Welfare and Education ministries formally create alternative-to-prison programs for detained Palestinian youth. Such programs would reduce the inequality between Israeli and Palestinian youth who are arrested, provide them with rehabilitation, allow for continued education, and in turn, prevent school dropouts.

Ossim Shalom continues to demand that Prime Minister Netanyahu recognize and rectify concerns regarding abuses and lack of education for detained Palestinian youth in East Jerusalem and the West Bank, and allocate funds to provide them with alternative-to-prison programs similar to those available to Israeli youth.

Leah R. Platkin, LMSW, is a social worker and NIF/Shatil Social Justice Fellow. She lives in Tel Aviv and is originally from Los Angeles. She works at Ossim Shalom-Social Workers for Peace and Social Welfare in Jerusalem and at Arous Elbahar in Jaffa.