Israel had hoped to use the Eurovision Song Contest to bolster its international image. We were there to remind the world that there is no business as usual with an occupying state. 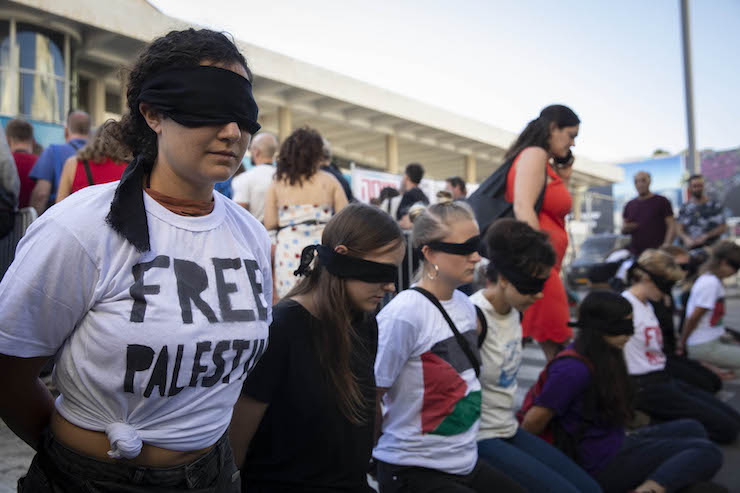 Contrary to the forecasts, Tel Aviv was not flooded by tens of thousands of European tourists last week, when Israel hosted the Eurovision Song Contest, as was repeatedly promised over the last year. City leaders hastened to reassure residents that the reason for the relatively small number of visitors had absolutely nothing to do with politics. Instead, they said, it was all economic considerations: Tel Aviv is simply too expensive, and many Eurovision fans preferred to stay home.

We will never know how many deliberately avoided Tel Aviv for political reasons. We do know, however, that many of those who chose to come were exposed to the Palestinian struggle, the occupation, the siege on Gaza, and Israel’s systematic violation of the human rights.

This Eurovision will go down in history as yet another moment that made clear that Israel cannot continue acting as if it is a normal country that does normal things. Every single day last week, Israeli, Palestinian, and international activists held a number of actions inside and outside the Eurovision events, as well as in Tel Aviv, Gaza, Ramallah, and Haifa.

Activists from Israel-Palestine and from across the world organized protests, including the Palestinians who held an alternative song contest in various locations across the country, including in the destroyed village of Sheikh Muwannis — where Tel Aviv University now stands. Activists also held direct actions, a demonstration to commemorate last year’s massacre on the Gaza border, and protest outside the Eurovision finale.

These actions were part of a year-long campaign that called called on artists and tourists to boycott Eurovision in Tel Aviv — to refuse to go along with Israel’s attempts to use the competition to whitewash its crimes against the Palestinian people. These campaigns are a direct continuation of the daily work done by groups that oppose the occupation and struggle for justice.

Between activism on the ground in Israel-Palestine and global campaigns, between Iceland’s gesture of solidarity on live television — even Madonna’s tepid message of co-existence — last week’s activism made clear that there is no such thing as business as usual with an occupying state. It was a testament to the fact that there is a large movement here and across the world that is working together to end the occupation and bring about a more just future.

It is true that many of us are in despair, and that Israel’s apartheid regime and corruption only grows deeper without being forced to pay a price. But if the fact that things are deteriorating hinders us from acting then we have failed in clearly stating our role. After all, the reason to oppose the occupation is not that we have a good chance of succeeding in the near future; the occupation must end because as long as institutional discrimination exists, as long as Palestinians live under a military regime and siege, as long as there are administrative detainees and checkpoints, we must struggle to change reality. 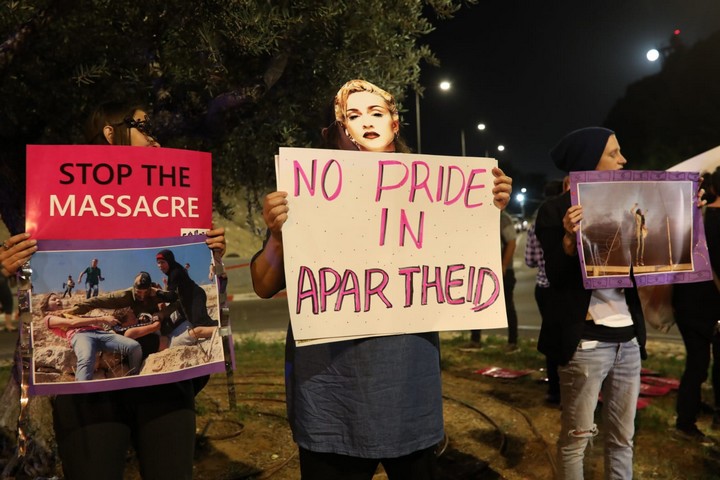 Israeli and Palestinian activists protest outside the Tel Aviv Expo Center during the Eurovision Song Contest finale, May 18, 2019. (Oren Ziv/Activestills.org)

As the situation deteriorates, as it grows more violent, discriminatory and desperate, our activism for peace and justice will become ever more important. As our movement dwindles, our presence becomes evermore critical. And as it begins to feel like we are alone in this struggle, we must raise our heads and show that there are many of us fighting for justice and equality, here in Israel-Palestine, and across the world. After all, just last week we pulled off a string of actions the likes of which we have not seen here in years.

There is no one action, demonstration, or campaign that will end the occupation or bring justice to Palestinian refugees. Therefore what we must do is continue to let the world know what is happening, to stand up for our principles, to resist.

The largest media outlets in the world reported not only on Eurovision, they also paid attention to our demonstrations. It was a week that proved that in our current reality, an international event of this size in Israel will bring about resistance to the occupation. We showed that even without the enormous budgets of the Foreign Ministry, the Tourism Ministry, or the Tel Aviv municipality, we can reach millions of viewers, readers, and tourists.

Tanya Rubinstein is the Co-Coordinator at the Coalition of Women for Peace. This article was first published in Hebrew on Haokets. Read it here.