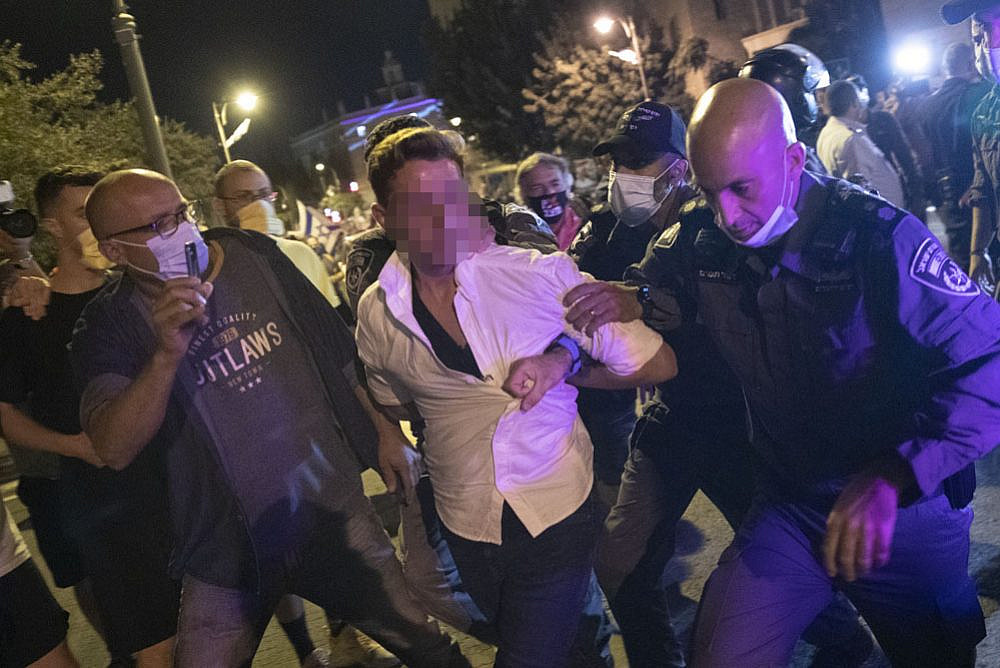 Police arrest the suspect who allegedly tried to ram his car into a group of anti-Netanyahu demonstrators in Jerusalem, September 20, 2020. (Oren Ziv)

It is no secret that Israeli security forces treat Israeli Jews and Palestinians, whether citizens and subjects of military occupation, with different gloves. While Jewish citizens often enjoy the benefit of the doubt of the police, Palestinians are often treated as suspected terrorists that need, first and foremost, to be subdued.

That gap was on full display on Sunday night when Israeli police thwarted a suspected car-ramming attack by a Jewish-Israeli man during the weekly demonstration against Prime Minister Benjamin Netanyahu in Jerusalem.

A video of the attack, which I filmed and first published on Local Call, shows the perpetrator speeding up his car as he drives in the direction of the demonstrators on King George Street. The car is seen approaching a police checkpoint before screeching to a halt, after which the driver is removed from the vehicle and arrested by the officers.

Following the incident, Israeli police published a statement that its “forces operating on King George Street arrested a suspect who drove quickly with a vehicle toward the police checkpoints and posed a danger to protesters and police.” Following the incident, Police Deputy Superintendent Alon Halfon said, “A vehicle arrived, the guy was arrested, and he is under investigation. The [police] fencing prevented him from continuing and causing harm.”

It is too early to determine what caused the driver to drive toward the protesters. As police took him into custody, I asked him why he tried to run over protesters. He chose not to answer and tried to attack me.

A group of four protesters sat in chairs on the road a few meters from where the car came to a sudden halt. They said they thought they were going to be hurt, and that perhaps something stopped the driver from attacking at the last minute. Maybe he saw the cops, maybe he changed his mind.

All that is currently known about the suspect is that he is 20 years old and resides in Jerusalem. By contrast, the names and details of Palestinian suspects are often released by security forces shortly after the incident.

The officers, of course, should be commended for the sensitivity with which they handled the situation. Those who arrested the driver apparently believed it to be an attempted attack, or at least felt their lives were in danger, since about four of them pulled out and cocked their weapons. Yet they did not open fire, instead showing precisely how to stop a dangerous driver without firing a single shot.

The police, as one veteran journalist noted, reported the facts from the officers’ point of view without adding any additional commentary. There was no discussion of an “attempted attack,” and even the words “attempted car-ramming” did not find their way into the police report. This was despite the fact that the driver clearly sped up and hit the brakes at the last minute, a few meters from a group of protesters — an event that miraculously did not end in casualties. 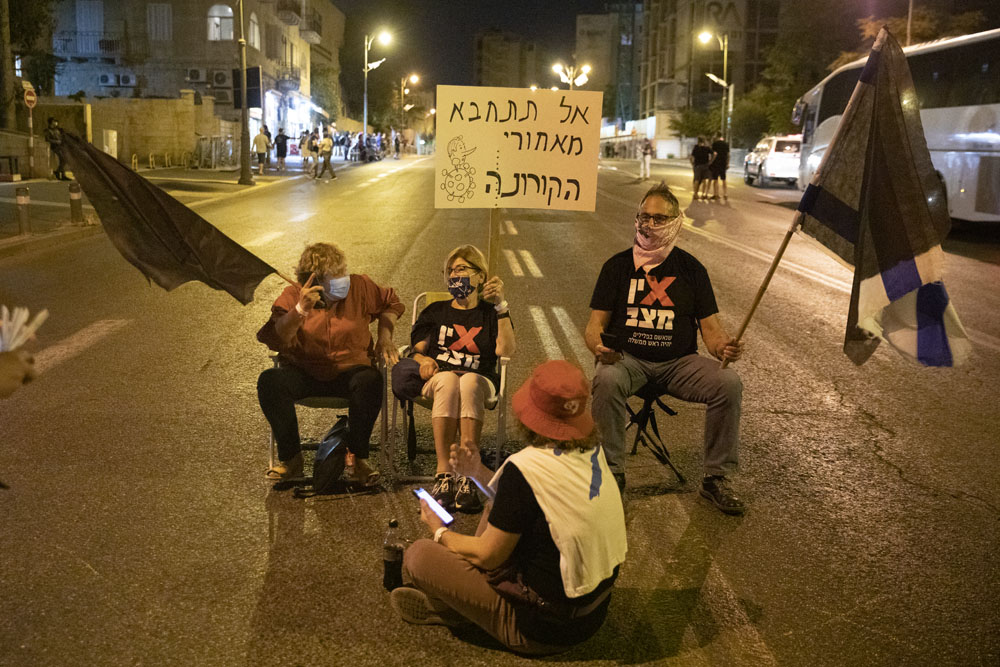 Israel protesters seen just before a man nearly drove his car into a crowd of anti-Netanyahu demonstrators in Jerusalem, September 20, 2020. (Oren Ziv)

It does not take much to imagine how such an event would have ended had the driver been a Palestinian: execution on the spot, before leaving the body out to lie on the ground until a sapper arrived to rule out the possibility of an explosive device. Within minutes of the incident, the police would release a statement about an attempted terror attack.

This was precisely what happened in the case of Yacoub Abu al-Qi’an, a Bedouin citizen who was shot dead by police in January 2017, and Ahmed Erakat, a Palestinian from Jerusalem who was killed by Israeli security forces at a checkpoint earlier this year. In the immediate aftermath of their shootings, Israeli police and the media immediately portrayed them as attackers, despite the questionable evidence against them.

Abu al-Qi’an and Erakat are just two of countless Palestinians who lost their lives and were immediately dubbed terrorists. But the police reminded us on Monday that there is another way to handle suspects that does not include opening fire on alleged attackers. A way, it seems, that is reserved for Jewish citizens only.