According to the Israeli army, Palestinians from Gaza can attend a relative’s wedding — just not their own. 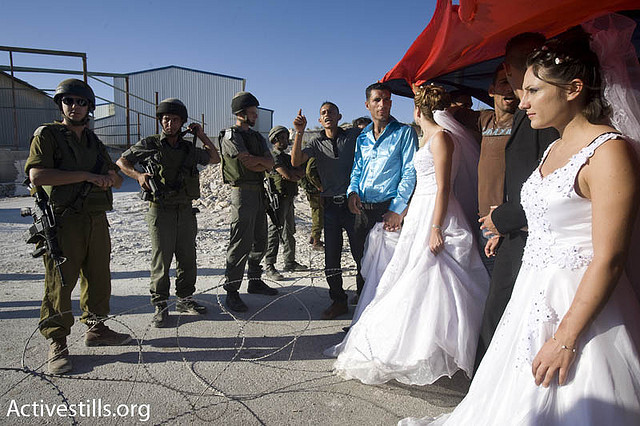 The Israeli army is denying a 23-year-old Palestinian woman from traveling through Israel to reach her own wedding ceremony in Jordan.

According to Israeli human rights group Gisha, the petitioner has been engaged to her fiancé — a Palestinian from Gaza with Spanish citizenship — for the past year and a half. Their wedding date has been delayed twice already due to fact that Israel will not let her leave the Gaza Strip, the second time after the couple had already sent out the invitations.

The woman, as well as her future in-laws, have attempted to coordinate leaving from Gaza through Rafah Crossing to Egypt, but the crossing has been mostly closed for the past year and a half and the line for a visa to pass through is some 17,000-people-long, according to Gisha.

The Israeli army rejected the woman’s previous exit permit applications on the grounds that she “does not meet the criteria.” According to the government’s own criteria, Palestinians may request exit permits only in exceptional humanitarian cases, including to attend the wedding or funeral of a first-degree relative — but not their own.

Gisha filed a petition to Israel’s High Court of Justice Thursday on behalf of the woman and her future in-laws. The petition demands that Israeli Defense Minister Moshe Ya’alon, the army’s Coordinator of Government Activities in the Territories (COGAT), and the army’s Gaza Coordination and Liaison office justify the travel ban.