A Jewish child arrested for an identical crime in the same location would not have been sent to prison. Israeli authorities released the girl after the case got attention and a request from her parents. 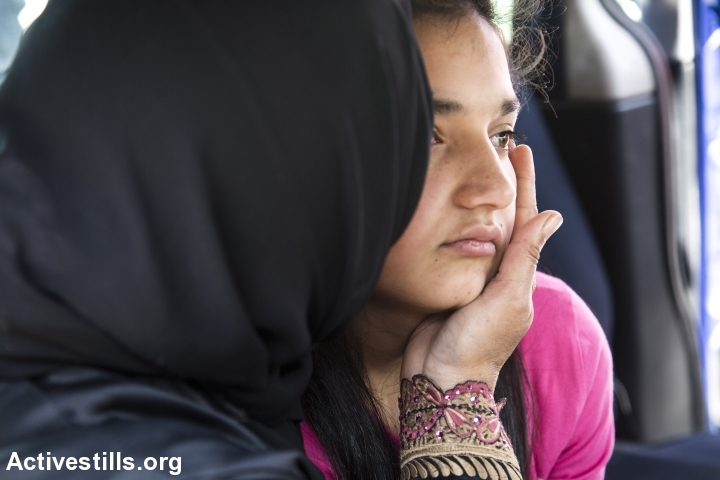 Dima al-Wawi is embraced by her mother after being released form 75 days in an Israeli prison, Jabara checkpoint, West Bank, April 24, 2016. (Keren Manor/Activestills.org)

Twelve-year-old Dima al-Wawi, the youngest Palestinian in Israeli prison, was released after two-and-a-half months on Sunday. Israeli authorities delivered her to the Jabara checkpoint in the West Bank in the early afternoon hours, where she was met by her parents and waiting journalists.

She was sentenced to four months’ imprisonment as part of a plea deal in which she was convicted of attempted manslaughter. The Israel Prison Service agreed to release the 12 year old two months before the end of her sentence, however, after an appeal by her parents and a growing international campaign. Journalists talk to 12-year-old Dima al-Wawi and her parents at the Jabara checkpoint, where Israeli authorities released her after 75 days imprisonment, West Bank, April 24, 2016. (Oren Ziv/Activestills.org)

The case highlighted the separate legal systems that Palestinian and Jewish children are subject to in the West Bank. Al-Wawi, a Palestinian, was sent to prison under military law.

Al-Wawi ran to hug her parents as soon as she was released from the Israel Prison Service transport vehicle Sunday afternoon.

Dozens of Palestinian and international journalists and photographers rushed her and tried to get her to make a statement. 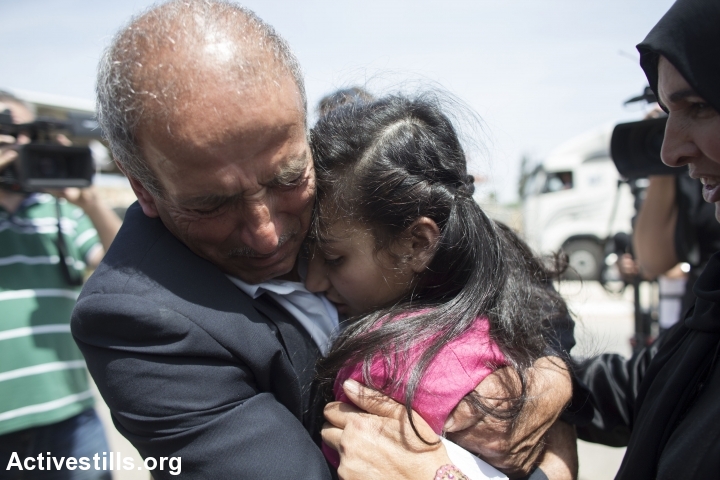 Dima al-Wawi is embraced by her father after being released form 75 days in an Israeli prison, Jabara checkpoint, West Bank, April 24, 2016. (Oren Ziv/Activestills.org)

The 12-year-old girl had difficulty speaking but eventually said she wasn’t scared and that she hopes all Palestinian prisoners are released soon.

Her mother, Umm Rashid, told +972, “I am happy that she was released but am furious about the situation. I was angry the day she was arrested and on every one of the 75 days that she was in Israeli prison. She was a girl who was always happy and wanting to play and now she came out of prison scared and weak.”

“Maybe she had a knife when they arrested her but she is just a child,” Umm Rashid continued. “What would she have been able to do with a knife? In Israel they don’t treat children the way they treat our children.”

Al-Wawi, like many other Palestinian prisoners, was held in a prison outside the occupied territories, which is a violation of international law.

Correction:
A previous version of this article erroneously stated that the age of criminal culpability for Palestinians is 14 — it is 12.