The latest bout between Israel and UNESCO suggests that the world is warming up to Israel’s conflation of the Jewish people’s religious and historical connection to Jerusalem with its claim to exclusive sovereignty over the city.

By Talya Ezrahi and Yonathan Mizrachi 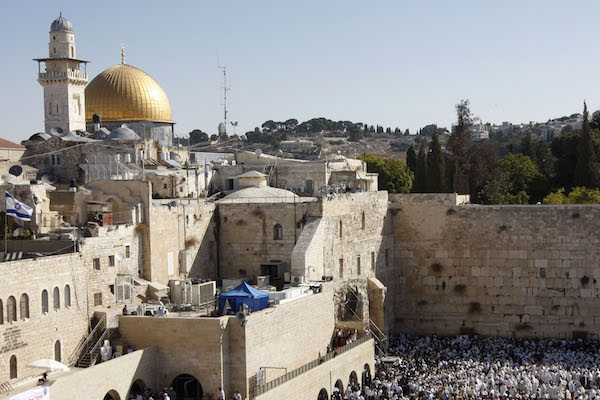 The Dome of Rock is seen in the background of the Western Wall in Jerusalem’s Old City as thousands of Jewish worshippers participated in the Cohen Benediction priestly prayer for the Jewish holiday of Sukkot, October 5, 2009. (Miriam Alster / FLASH90)

Israel’s success at UNESCO this week was a diplomatic coup. In a work of crafty diplomacy, Israel succeeded in undermining an agreement between the Arab states and 11 EU countries which softened the wording of a resolution that it believes disputes its claims to Jerusalem. Nevertheless, we are told that as a result of heavy pressure by Netanyahu and the Foreign Ministry, more countries opposed a UNESCO resolution concerning Israel than had in years.

Why did Israel invest so much effort into foiling a resolution it ought to have regarded as less objectionable?

Unlike previous UNESCO resolutions, this one cannot be construed as a denial of the Jewish people’s religious and historical connection to Jerusalem. It omits any references to the Temple Mount by its Muslim name, Haram al-Sharif, or to al-Aqsa Mosque — references which had so outraged Israel in the past. The new resolution also includes a clause affirming the importance of Jerusalem to the three monotheistic religions.

So why object? Because the resolution continues the tradition of calling Israel the “occupying power” in East Jerusalem and declares the Basic Law on Jerusalem (through which Israel officially annexed East Jerusalem) null and void. And on the eve of Israel’s celebration of 50 years since the “liberation of Jerusalem,” anyone who dares call into question the legitimacy of Israel’s rule over East Jerusalem, or its right to crown a united Jerusalem as its capital will face the full force of Israel’s diplomatic machine.

But what might appear to be just another diplomatic victory actually suggests something much more profound: the beginnings of the international community accepting Israel’s conflation of the Jewish people’s religious and historical connection to Jerusalem with its claim to exclusive sovereignty over the city.

Although this latest UNESCO resolution does not call into question the Jewish people’s bonds with Jerusalem, Israel’s level of indignation remains the same because the resolution reiterates the international community’s objection to Israel’s presence in East Jerusalem as an occupying power. The Israeli government will not allow a distinction to be made between an acknowledgement of the Jewish people’s cultural, historical and religious connection to Jerusalem on the one hand, and its right to exclusive sovereignty on the other. And for now it looks like “the world” might be beginning to follow suit.

Another clause in the resolution assailed Israel for the persistent excavations and tunneling in and around the Old City. This is part of the same story. For the past two decades Israel has spared no effort or money in reshaping Jerusalem’s historic landscape and creating tourist routes that are dominated by a narrative of Jewish belonging.

It seems that every month or two we are treated to a statement (usually following a discovery during excavations) by Netanyahu or one of his ministers about how archaeology proves our rights in the city. The excavations of hundreds of square meters under houses in the Muslim Quarter and the planned construction of two massive buildings — the Kedem Center, just outside the Old City Walls, and Beit HaLiba in the Western Wall plaza — are just some of the mega projects changing Jerusalem’s landscape and flattening its multi-layered heritage.

The increasing cooperation between government authorities and right-wing settler groups demonstrates the extent to which Israel has adopted the settlers’ strategy of using archaeological sites as a means to take over territory and dominate the historical narrative.

Places like the City of David and the Western Wall Tunnels, which overwhelmingly emphasize the story of Jewish continuity in the city while underplaying or omitting other periods and people, serve an agenda that seeks to frame Israel’s sovereignty over East Jerusalem as non-negotiable. The vast investment in bringing school children, soldiers and tourists to these sites reflects an expectation that visiting these sites will convince the Jewish Israeli public of its exclusive rights to the city.

But even the most impressive artifacts cannot blind us to the fact that East Jerusalem is disputed territory. Alongside the impressive remains associated with the history of the Jewish people, Jerusalem is rich with remains from other periods of history, from the Canaanite period to modern times.

The Palestinians also have historical, religious and political claims on this city. Netanyahu can repeat over and over again statements like “there is no other people for whom Jerusalem is as holy as for the Jewish people,” as he did to attack UNESCO this week. But that doesn’t change the fact that Jerusalem is a multi-layered city with a multicultural history and present.

Strong-arming the international community into watering down or opposing critical resolutions at the UN might seem like a victory for Israel in the short term, but in the long term we all lose out. There are members of other nations, faiths and cultures who feel that Jerusalem belongs to them. This is not going to change.

A sustainable solution for Jerusalem will only be possible once Israel can accommodate a political framework that acknowledges the rights of other communities to this city, and treats its precious historical resources as assets to be shared, not private property to be exploited in the service of exclusive claims.

The writers work for Emek Shaveh, an Israeli NGO which promotes archaeology as a resource for building bridges between peoples and nations.