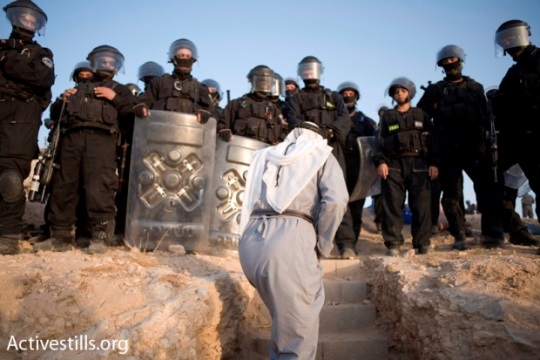 A Bedouin man confronts Israeli policemen during the destruction of the unrecognized village of Al-Araqib (photo: Activestills)

Israel’s Supreme Court made a significant ruling this week, setting a precedent for the state to approve the expropriation of Palestinian land in future cases, specifically inside Israel.

The court rejected a five-year old petition filed by the Al Uqbi family to recognize its ownership over a large plot of land in Israel’s Negev/Naqab Desert. The land also includes the unrecognized village Al Arakib, which is still in its own legal battle for recognition from the stae.

According to Attorney Michael Sfard, who represented the Ul Uqbi family, no one is arguing with the fact that the family has been living in this area for centuries. However, the ruling does not recognize the family’s ownership of the land since it defines it as consisting of stone houses and written deeds as proof of ownership. Bedouin have traditionally lived in tent structures and their ownership was passed down orally, such that they do not fit that definition. As Sfard points out, the judgement uses “cultural bias to uphold Western notions of what a ‘human settlement’ is.”

The petition called for recognition of ownership over the family’s historical lands, from which they were expelled in the 1950s. The ruling, which went largely un-reported in the Israeli media, effectively means the state does not recognize Bedouin rights to the land, clearing the path for it to continue to legalize the expropriation of Palestinian lands, whether inside Israel or in the West Bank.

The decision not only fails to acknowledge the distinct historical and cultural heritage of this Bedouin community, it is also a major contradiction: while Bedouin property rights are not recognized, the Zionist purchase of land from Bedouin before the state was established is. If the court recognizes land deals made with the Bedouin, it necessarily implies that it recognizes their ownership. But according to Sfard, the court simply disregarded this fact. Israeli officials often claim that the country was established through the legitimate purchase of land from Arabs, not through forceful expropriation.

“The bottom line: hundreds of thousands of Bedouin have lived for centuries in the Negev, but as the court astonishingly said, the Bedouin way of life does not create any legal rights in the lands they lived on and cultivated for generations,” Michael Sfard says.

While the village of Al Arakib’s legal struggle with the Be’er Sheva court is still ongoing, the Supreme Court decision indicates it will be nearly impossible for the village to win any legal claims to their land. The court also dismissed all arguments based on international law as it relates to indigenous people, since these claims have yet to become binding under international law.

The land belonging to the unrecognized village of Al Arakib, like countless plots of land in the Negev, was expropriated under the Land Appropriation Law of 1953. The law allowed the state to easily expropriate land for purposes of “development, settlement and security,” with a few ludicrous stipulations: that the land was not in its owner’s possession on April 1, 1952, and that the state use the land for purposes of development, settlement or security, or at least that it needs the land for those purposes. In reality, the state dispossessed the village residents of their land, and has not once used their land for any purpose.

As part of the legal process that has become more and more common in the Negev over recent years, when Al Arakib’s residents filed a land ownership claim in the 1970s, the southern district prosecutor filed a counter-claim on the same plot of land, claiming it was actually state land. While the courts verified ownership, the village’s residents attempted to challenge the expropriation itself. This strategy has failed.