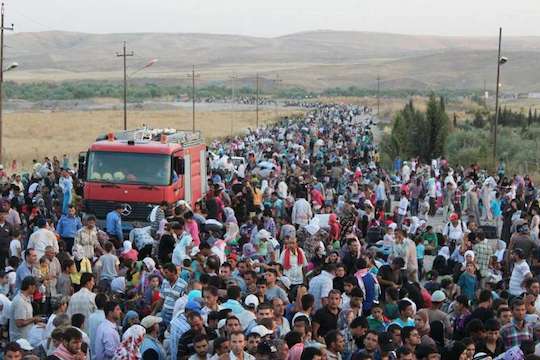 Thousands of Syrians flood across the border into Iraq recently in search of shelter. (Photo by UNHCR / G. Gubaeva)

Conventional Israeli wisdom has it that the world has lost interest in Syria and its ongoing civil war. This belief was best exemplified last week by Israel’s Channel 10 whose news department aired a newscast dealing with the chaos in Syria. The news segment, prepared by Arab affairs correspondent Zvi Yehezkeli, delivered a simple message – the world has forgotten about Syria and the Syrian people. According to Yehezkeli, Bashar al-Assad’s agreement to surrender his chemical weapons stockpile has awarded him with immunity from outside military intervention and the international community has resolved to play the role of a concerned observer.

Despite its effectiveness, Yehezkeli’s newscast was not only misleading it was also wrong.

If one wishes to understand foreign policy in the 21st century he must turn his attention to digital platforms. Nowadays, most foreign ministries operate multiple social accounts such as Facebook profiles and Twitter channels in an attempt to engage directly with foreign publics and governments. Analyzing such social media accounts enables one to identify the foreign policy agendas of various governments. An analysis of the UK’s twitter account, for instance, reveals not only that the world has not forgotten about the Syrian people, but that some nations have placed the Syrian crisis at the very top of their foreign policy agenda.

PM: Britain can be proud we are 2nd largest bilateral aid donor to #Syria – £500m. Encourage other countries to step up to the plate #PMQs

Throughout December and January, the UK’s twitter account has dealt mainly with the Syrian civil war and its outcomes. Both Prime Minister David Cameron and Foreign Minster William Hague have repeatedly tweeted that the UK views the ousting of Basahr Assad as the only solution to the Syrian war. To this end, the UK hosted another meeting of the “London 11”, a forum of eleven countries dedicated to ending the Syrian civil war with a political transition. More importantly, the UK has dedicated funds and resources to aiding the 1.8 million Syrian refugees who have fled their country to refugee camps in Jordan, Turkey and Lebanon. UK officials routinely visit these camps in an attempt to assess the scope of the Syrian refugee crisis and to raise attention to the plight of the refugees.

.@WilliamJHague: Assad and those around him should be in no doubt that the world will hold them to account. #Syria

The commitment to Syria goes far beyond photo ops and tweets as Britain has donated more than £500 million (over 2 billion shekels) to the benefit of Syrian refugees. It has also established a winter appeal for the refugees promising to match funds raised by UK citizens. Like the Stark family in “Game of Thrones,” the UK understands that winter is coming and with it an escalating humanitarian crisis in the refugee camps. In order to prevent such a crisis, the British government recently supplied blankets and heating equipment.

Yet the UK should not be asked to shoulder this burden on its own. Other nations must join forces in aiding the Syrian refugees, including the State of Israel.

Over the past 30 years, Israel has signed peace accords with both Jordan and Egypt. However, such accords have never lead to the establishment of direct ties between the people of Israel and their neighbors to the east and south. Thus, Israel’s peace with its neighbors can be viewed as a hybrid between a peace accord and a non-aggression pact. But it is the Syrian crisis that presents Israel with the opportunity to establish ties – as it is now in a position to aid Syrian refugees, regardless of their government’s stance towards Israel. By providing much needed aid, Israel will be able to lay the foundations for a new relationship with the population of a neighboring Arab state, one that is based on mutual understanding and respect. This is perhaps especially possible in regards to the Palestinian people, whose refugees are under siege in the Yarmouk camp and are literally starving to death.

.@WilliamJHague: Deliberate obstruction of aid to Syrian people is unacceptable. Now sickening reports people may be dying from malnutrition

The Jewish state has always relied on its schnorr abilities in order to raise funds from Jewish communities throughout the world. Israel should now use these abilities in order to establish an international Jewish appeal for Syrian refugees. Like the UK, the Israeli government should promise to match the funds raised by our wealthy uncles abroad. While it is possible that Jordan, Lebanon and Turkey would refuse to accept these funds directly, they could be transferred to various UN organizations operating the refugee camps.

An international Jewish appeal for Syrian refugees should not be seen as a strategic opportunity but as a moral imperative. This country, which was built by refugees seeking safe harbor, must assist those fortunate enough to escape certain death at the hands of a despot. Moreover, such an effort would demonstrate Israel’s true desire for peace as well as its commitment to humanistic values.

The Syrian people will not forget that Israel was willing to put its humanity ahead of its geopolitics nor are they likely to reject our friendship.

Ilan Manor is studying towards a Phd in Communication at Tel Aviv University. He has previously contributed to 972mag, the Jewish Daily Forward and the Jerusalem Post. He blogs at www.ilanmanor.com.