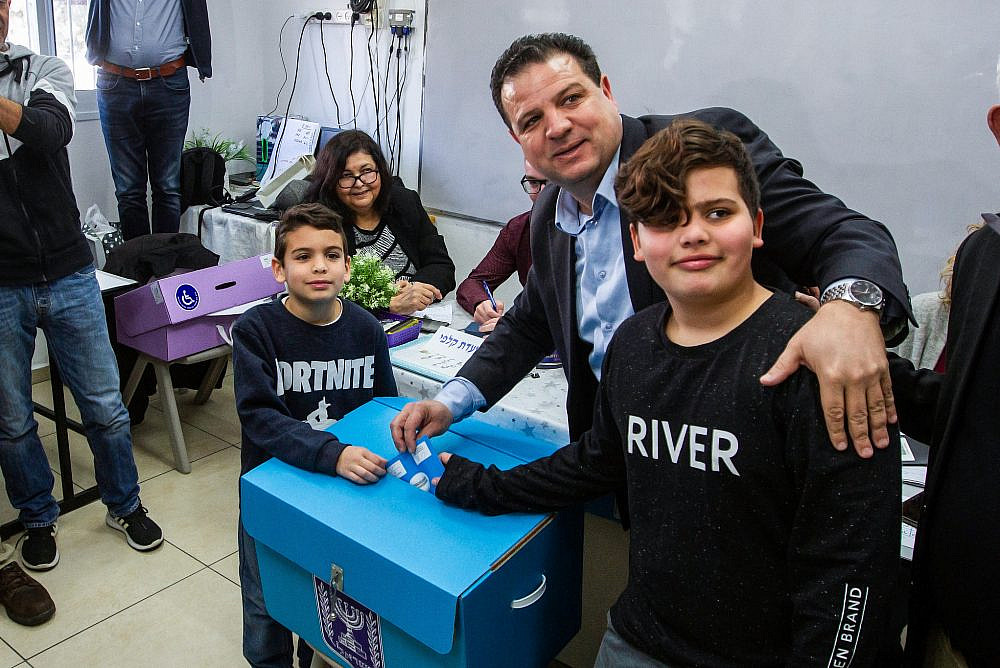 Joint List chairperson Ayman Odeh casts his ballot at a voting station in Haifa, during the Knesset Elections, on March 2, 2020. (Flash90)

Israeli citizens head to the polls for the third time in a year on Monday to try and break the gridlock between the right-wing bloc led by Benjamin Netanyahu’s Likud Party and the anyone-but-Bibi bloc headed by Benny Gantz from Blue and White.

While recent polls have shown an uptick in support for Netanyahu, the rise is slight and the coalition-building blocs are stuck, prompting many to talk already about the possibility of a fourth election. It looks possible for the prime minister’s party to receive the most votes, but he will be unable — once again — to form a coalition.

This past cycle has been particularly dirty, rife with racism, leaks, and promises to annex large swaths of the occupied territories. Palestinians in the occupied territories will, once again, be barred from electing the leaders who will have the power to decide their fate. Here are three things to keep in mind today as Israeli citizens head to the polls.

The surging Joint List: In 2015, Avigdor Liberman sought to ensure that Israel’s Arab parties would stay out of the Knesset by raising the electoral threshold to 3.25 percent. Little did he know that, despite the political and ideological differences between them, Islamists, communists, and liberals would find enough common ground to become a formidable force in Israeli electoral politics, and the third-largest party in Knesset today.

That same year also saw the beginning of a widespread incitement campaign against Palestinian parties in Israel — and against the Palestinian citizens of Israel writ large — when Netanyahu infamously warned right-wing voters that the Israeli left was busing “Arabs to the polls in droves.” The prime minister’s incitement has set a new kind of gold standard ever since, turning Palestinian political power — along with the press, the judicial system, and the Israeli left — into the ultimate threat to the continued rule of the right.

That campaign continued in the latest election cycle. Likud has, since last April, run a racist campaign under the slogan of “Bibi or Tibi” (in reference to leading Palestinian MK Ahmad Tibi). He uses “Tibi” as an epithet to taint his Blue and White rivals as weak leftists who would conspire with Palestinian citizens to see the prime minister ousted (and implicitly, destroy the Jewish character of the state). Although Gantz is Netanyahu’s most daunting political rival, and likely the only other Israeli leader who could form a governing coalition, Netanyahu has spent the majority of the campaign attacking Tibi at his election rallies. Tibi’s name has become a codeword for the entirety of Israel’s Palestinian public. 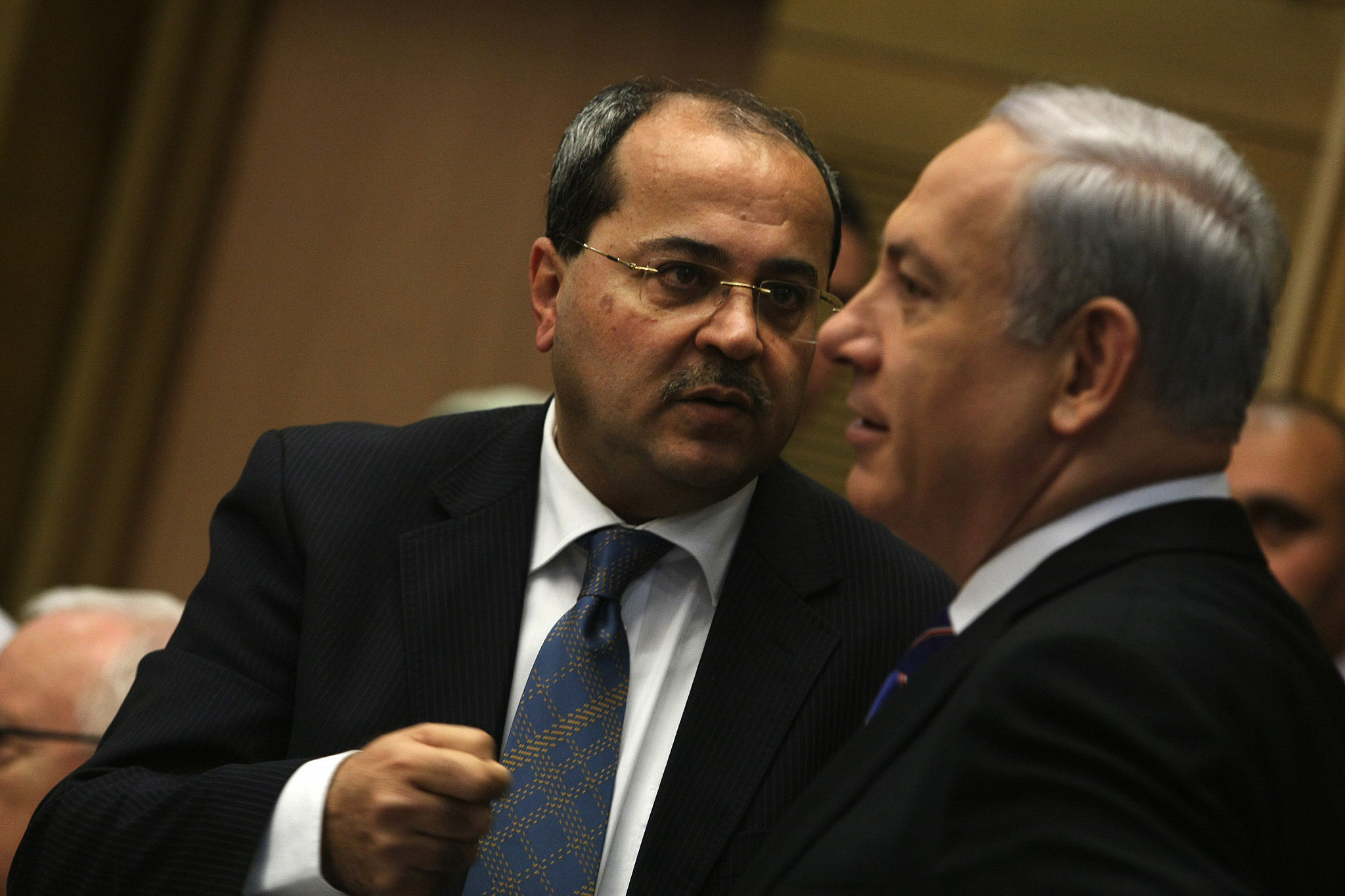 MK Ahmad Tibi speaks with Prime Minister Benjamin Netanyahu during a session of a parliamentary committee of inquiry devoted to the problem of rampant violence in the Palestinian community in Israel at the Knesset in Jerusalem, February 13, 2012. (Kobi Gideon/Flash90)

The attacks have only helped fuel the Joint List’s fire to try and surpass their 13-seat showing in the Knesset, with a campaign that has focused on targeting young Palestinian voters and women in areas with historically low turnout, such as the Negev/Naqab Desert. This time around, the list is hoping to get 15 seats, an all-time record for Palestinian Arab parties in the Knesset and a significant boost for Palestinian citizens of Israel in the face of increasing racism and ultra-nationalism. Two more seats would mean an additional two female Arab MKs in the Knesset and, depending on the full results, could make it much harder to Netanyahu to form a coalition.

Interestingly, the Joint List has also doubled down on targeting Israeli Jews, particularly those who no longer see a home in the Zionist left, following the merger of Meretz and the Labor party. It is yet unknown just how successful these overtures to the Jewish public will be, but many are expecting this round to conclude with a record turnout by Jewish voters for a Palestinian list in Israel.

The future of annexation: Netanyahu launched his election campaign with what appeared to be a green light from the White House to allow the prime minister to upend decades of policy in the occupied territories and annex large swaths of the West Bank. The elation was short-lived, however, after it became clear that Jared Kushner, one of the architects of the “Deal of the Century,” stated that any annexation would have to wait until after the Israeli elections.

Netanyahu was forced to backtrack on his timeline, and as the annexation promises multiplied, the prime minister likely lost some credibility. The right has been divided about the plan, with hardliners who view it as too much of a concession. 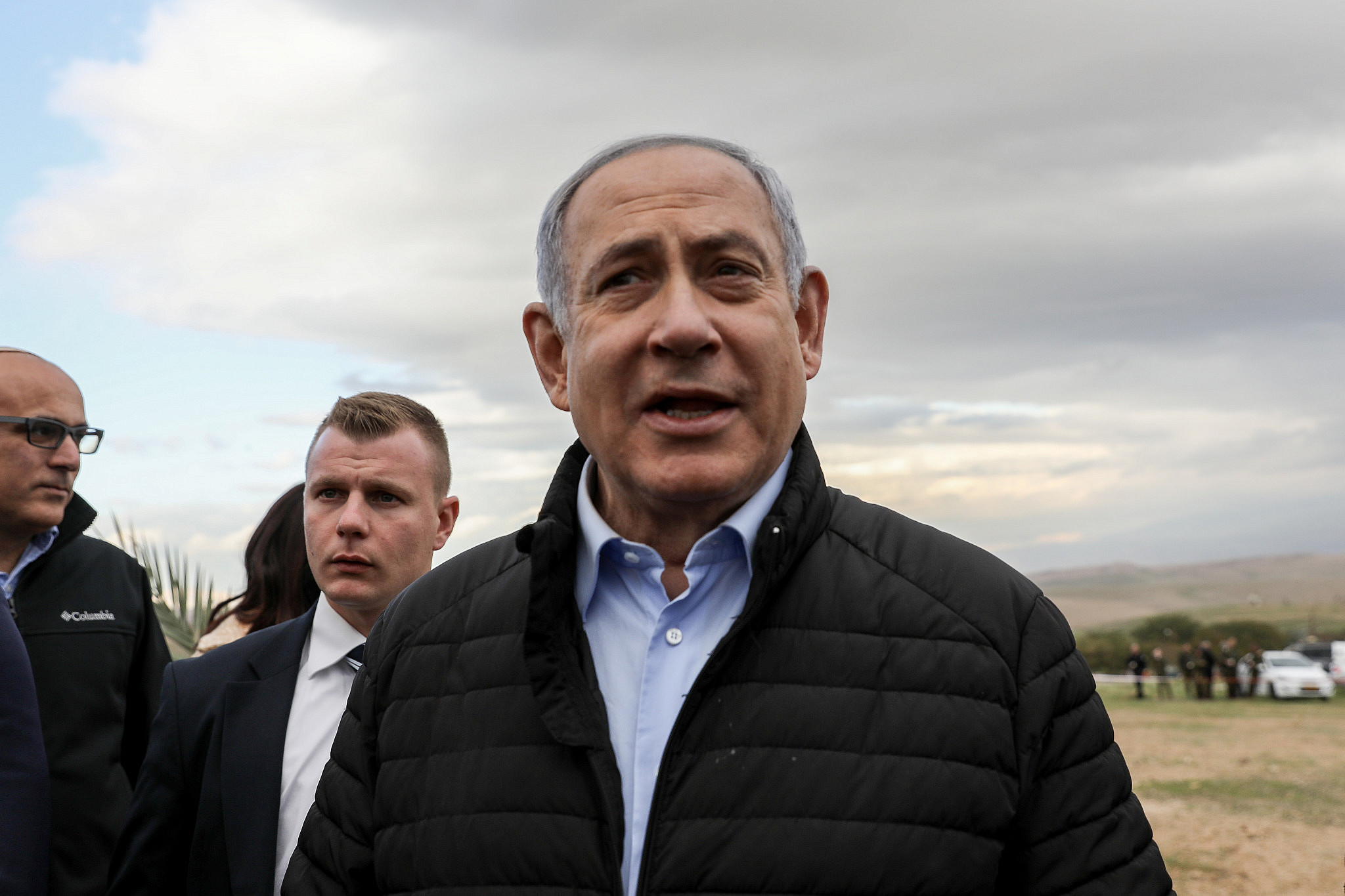 Israeli Prime Minister Benjamin Netanyahu seen during a tree planting event for the Jewish holiday of Tu Bishvat, in the West Bank settlement of Mevo’ot Yericho, in the Jordan Valley, February 10, 2020. (Flash90)

Netanyahu has for years made clear his intention to maintain eternal control over the occupied Jordan Valley, which he views as a strategic buffer between the West Bank and the Arab world. One would think that Netanyahu’s annexation victory lap, momentary as it was, would have jolted Gantz into action, causing the former IDF chief of staff to make anti-annexation policies part of his platform.

Unlike the last round, when the election results made it nearly plausible that Gantz would welcome the support of the Joint List in forming a coalition, this time Gantz’s campaign took a hard-right turn. Trying to outflank Netanyahu, Gantz welcomed the Deal of the Century — even flying to Washington to meet with President Trump himself — saying he would bring the Trump plan to a vote in the Knesset. The decision to pull far to the right was likely borne of political strategists looking to target Likud moderates who had had enough of the prime minister’s corruption and, they calculated, would either vote Liberman or stay home on Election Day.

Control over the Jordan Valley has, since its occupation in 1967, been a quiet consensus issue among both the left and right. The Labor Party built settlements in the area following the 1967 War, and Likud sought to entrench those settlements more deeply. Instead of breaking with tradition in the face of a furious drive toward annexation, Gantz decided to try and turn annexation into a consensus issue. Ironically none of it seems to have helped his chances of besting Netanyahu, leading Gantz to ditch the far-right façade late in his campaign. 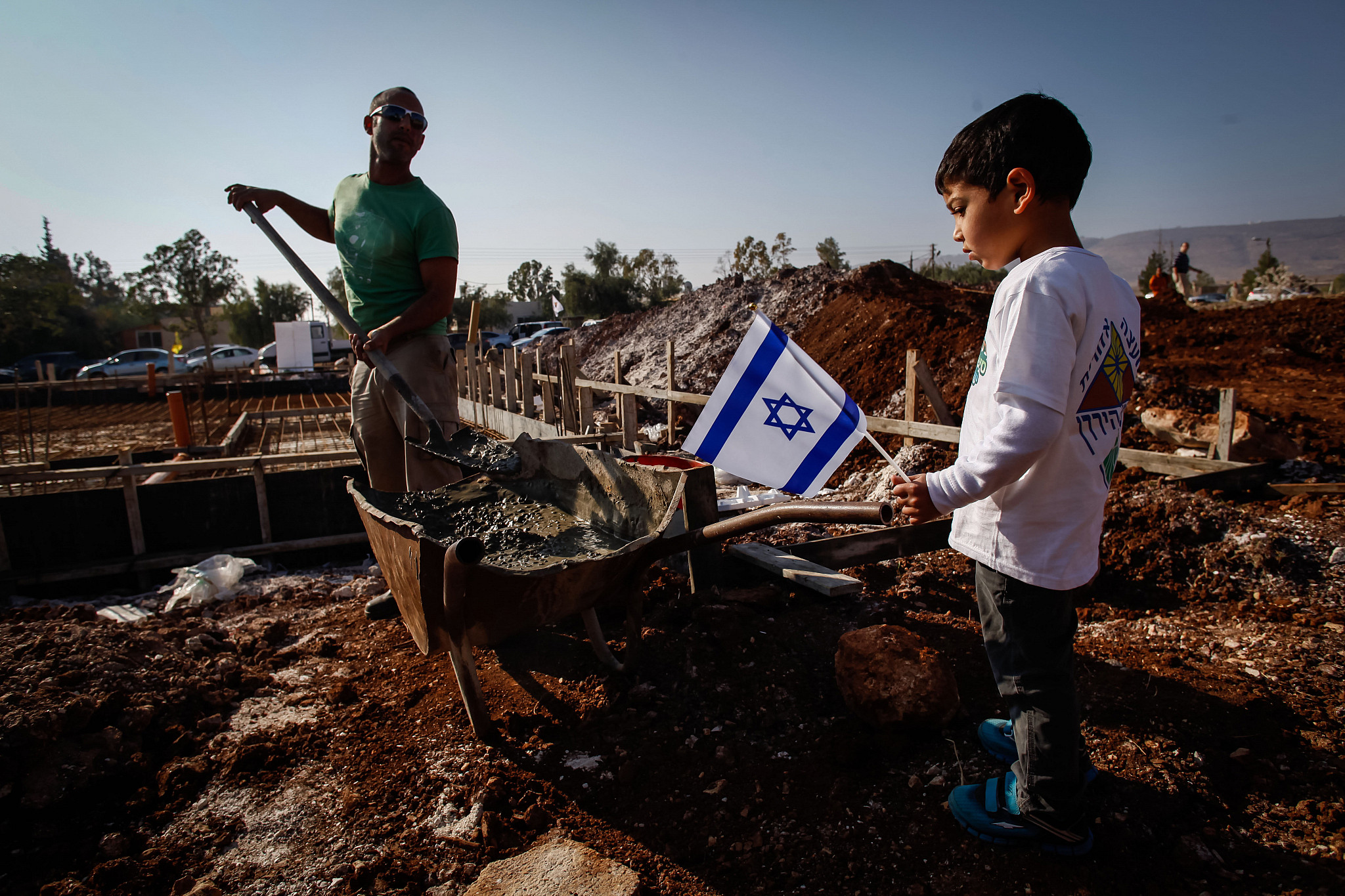 Jewish settlers at a ceremony unveiling the cornerstone for a new neighborhood in the West Bank settlement of Moshav Gitit, Jordan Valley on January 2, 2014. (Uri Lenz/Flash90)

That annexation may have to wait for after the elections does not mean the concept is dead in the water. A victory for Netanyahu’s right-wing bloc could see the immediate return — and perhaps implementation — of some form of annexation. Another stalemate, or even the possibility of a national unity government between Likud and Blue and White, could mean that annexation will be put on hold until the day the right-wing bloc can form a government without the moderates.

The slow death of the Zionist left: The Zionist left seems to have its own version of Groundhog Day every time Israelis head to the polls. After a sharp dive in support the past 20 years, Meretz party operatives were worried that their party would not be able be able to withstand another round of elections and break past the election threshold. Their last-ditch attempt to remain in the political game revolved mainly around pressuring Labor-Gesher (itself a merger of Labor with Orly Levy’s socially-minded Gesher party) to merge and form a list that would keep the Zionist left alive. Or at least on assisted ventilation.

Following a campaign of Meretz-style promises to protect civil liberties and the LGBTQ community, slogans of support for working class Israelis, and (bizarre) billboards with its tripartite of leaders alongside Benny Gantz — much to the chagrin of Blue and White — Labor-Gesher-Meretz is now hovering between 9-10 seats. 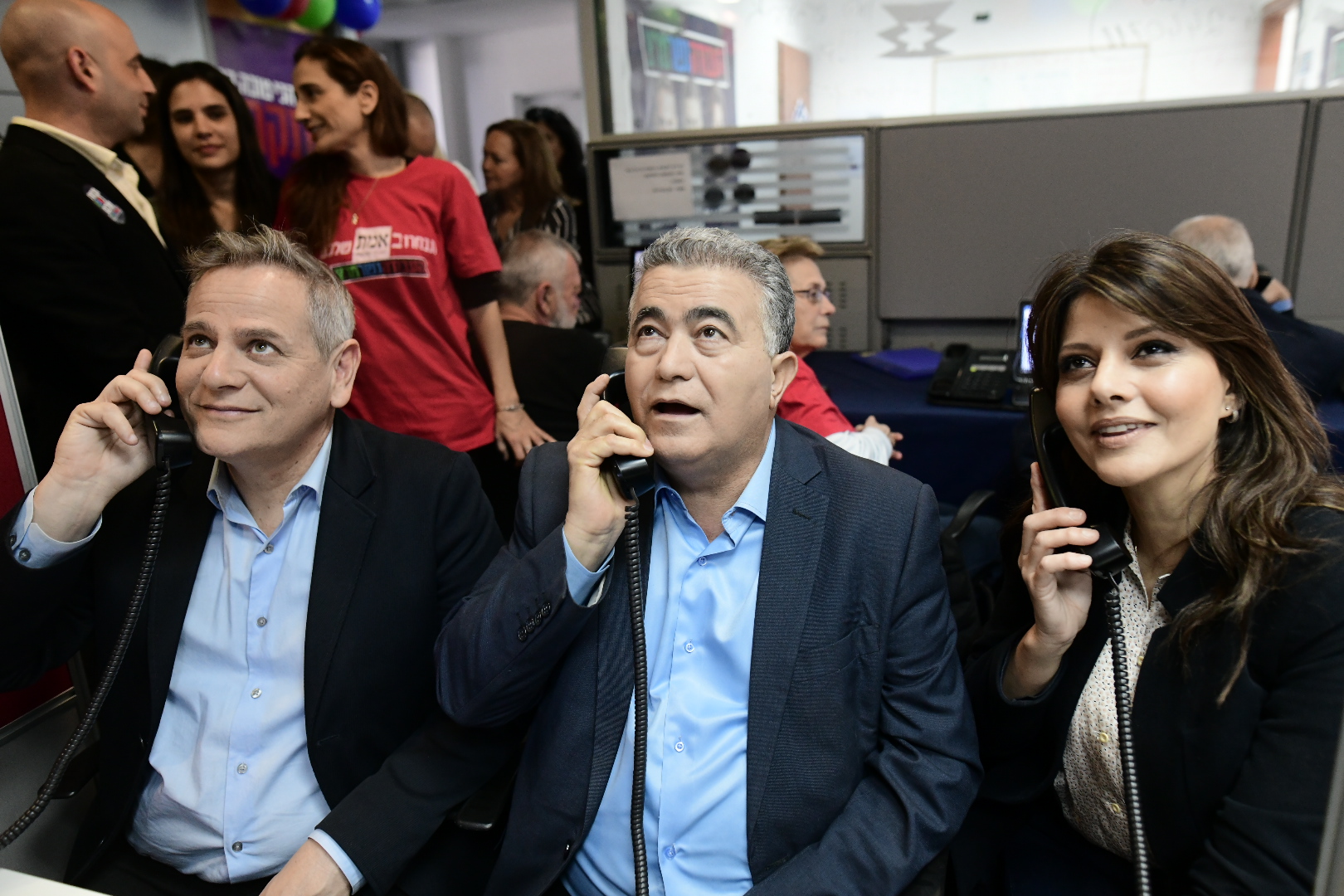 The heads of the Labor-Gesher-Meretz party, Nitzan Horowitz, Amir Peretz, and Orly Levy, make calls to convince citizens to vote for them at their election headquarter in Tel Aviv on March 01, 2020. (Tomer Neuberg/Flash90)

The fact that a union between Labor, once the largest and most powerful institution in Israeli society, and Meretz is barely scraping the number of seats the latter won on its own 20 years ago is more than simply a testament to the slow, sluggardly death of the Zionist left. It is a testament to an entire worldview in crisis. The camp that was supposed to carry the mantle of peace has deliberately ran successive campaigns almost entirely bereft of Palestinians or the occupation.

The refusal to talk about peace and an end to the occupation has allowed the centrist camp to run roughshod over the Zionist left over the last 15 years since the end of the Second Intifada. The center, unlike the Zionist left, never premised its existence on ending the occupation, instead focusing its efforts on socio-economic issues plaguing the middle class, pledging to wipe out the scourge of corruption, and maintaining Israel as “Jewish and democratic” without much of a plan for how to do it. This has made it easy for the center to capture electoral power from traditional strongholds of Labor or Meretz in the upper-middle class neighborhoods of Israel’s cities.

These problems are not technical, but rather structural in the Zionist left, which holds fast to an ideology that affords privileges to Jews above all others and is thus unable to put forth a vision based on equality for all under Israeli rule. Labor and Meretz may find new, innovative political configurations to keep themselves afloat for now, but with the dominance of the annexationist consensus on the one hand, and the possibility of a new left-wing vanguard led by the Joint List on the other, the Zionist left parties will be likely be forced to radically rethink their mission, face repeated political emergencies, or call it a day.