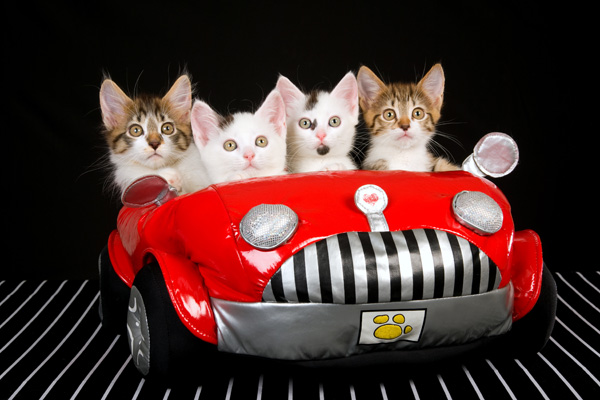 Kittens being driven from their homeland. (Illustrative photo by Shutterstock.com)

We knew it would happen sooner or later. The occupation has finally come home to roost. The darkest of Israel’s injustices, mass displacement and population transfer, is now threatening the Tel Aviv left-wing establishment’s holiest of holies — cute, little kittens.

Israeli Agriculture Minister Uri Ariel is proposing a full-fledged population transfer of Israel’s stray feline population, or rather all of its males, or females. No, seriously. We’re not making this up.

The transfer plan was revealed in a letter from the minister that was published by Yedioth Ahronoth on Monday. According to the report, Ariel, a religious Jew, is looking for alternatives to spaying and neutering the cute little creatures because he believes doing so violates Jewish law.

In the letter, Ariel suggests taking the budget for neutering and spaying and instead using it to “transfer dogs and cats of a single gender (all the males or females) to a foreign country that is willing to accept them.”

The wording, “finding a foreign country that would agree to take” them, is, of course, reminiscent of Israel’s efforts to deport African asylum seekers to third countries, often times in exchange for weapons or other unpublished quid pro quo arrangements.

Many asylum seekers who took part in such “voluntary deportation” programs were sent to Uganda and Rwanda, and have reported that they were left with no money or legal status, many being forced to live on the streets.

One must seriously question whether Israel will be able to negotiate a better, more humane deal for its unwanted feline infiltrator population. Even more worrying: will tabbys and white cats receive better arrangements than their darker-furred brethren?

And then there is the question of how to actually get the cats on planes? Will Ariel hire trappers? Will he leave a trail of cat nip or canned tuna? Or maybe he’ll just line the streets of Tel Aviv with cardboard boxes?

Zehava Galon, head of the left-wing Meretz party, responded to the forced transfer plan by suggesting “this is the time to find a foreign country that will agree to take [Minister Ariel].”

Which begs the question, what country would actually agree to take in the kittens? If no sovereign country is found to take in the feline exiles, Israel could always build them their own settlement somewhere in the West Bank.

“Does Uri Ariel think that transferring [the cats] from here will cause them less suffering,” preeminent animal rights organization “Let the Animals Live” asked in a Facebook post Monday morning, in which it promised to challenge the population transfer in Israel’s High Court.

At least there’s that. The cats will have their day in court.