Palestinian citizens of Israel are being subject to preventive arrests as Israel attempts to silence dissent. 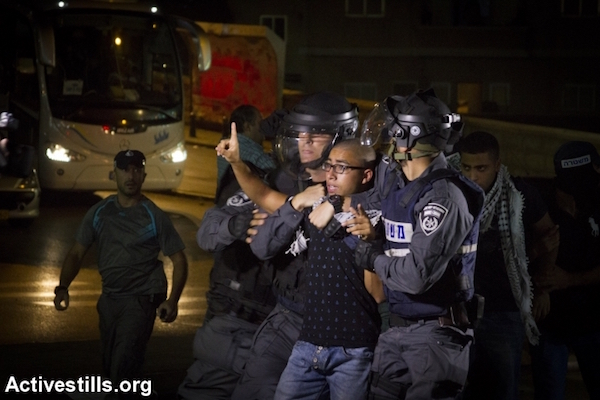 Israeli police came to Adan Tartour’s Jaffa home at half past midnight. They pounded on the door. When the Tartours opened it, police said that they had an arrest warrant.

Adan, an 18-year-old Palestinian citizen of Israel who hopes to study law and history at university, was arrested for “suspicion of violence and terrorism” — all because she’d signed up to take a bus to a protest in Nazareth.

Although the demonstration, which was scheduled for Thursday, had not taken place yet, Tartour and other activists were detained last Wednesday night. Some were arrested on suspicion of planning “illegal” demonstrations. Others who managed to actually attend demonstrations were arrested and charged with taking part in an “illegal” gatherings or attacking police. In reality, lawyers say, the protesters were the ones who were assaulted.

Lawyers and activists point out that, in Israel, protests do not need authorization. They say that the wave of “preventive arrests” reflect Israel’s attempts to quiet dissent against its recent provocations at Al Aqsa and the shooting deaths of Palestinians in East Jerusalem and the West Bank. They believe that Israeli authorities aim to frighten and intimidate Palestinian citizens of the state.

Attorneys also say that the arrests violate Palestinian citizens’ right to freedom of expression and that minors’ legal rights were violated while in custody.

There are also reports that protesters were beaten — they have appeared in court with visible bruises on their bodies. Family members who are not involved in demonstrations have also been arrested, as was the case when Tartour was detained last Wednesday night.

“They had an arrest warrant for me and my father,” Tartour explains, adding that this was the case with other female detainees. “They were arrested with their fathers… it’s humiliating and chauvinistic.”

The two were taken to a local police station before being transferred to Nazareth, where they arrived at 4:30 in the morning. During her interrogation, which began at 5:30 a.m., police repeatedly told Tartour that she “is a shame to her family” and that her actions are “not good for her family.” She felt that this Orientalist appeal to “family honor” was an attempt to dissuade her from protesting.

“But what they don’t understand is that our [Palestinian] families stand by their daughters,” she says.

While her father was released early Thursday morning, Tartour’s detention was extended by an Israeli court. After four days, she was let go with the caveat that she might be taken for additional investigation, and under the condition that stay away from Nazareth for two weeks.

She is also “forbidden from joining protests.” 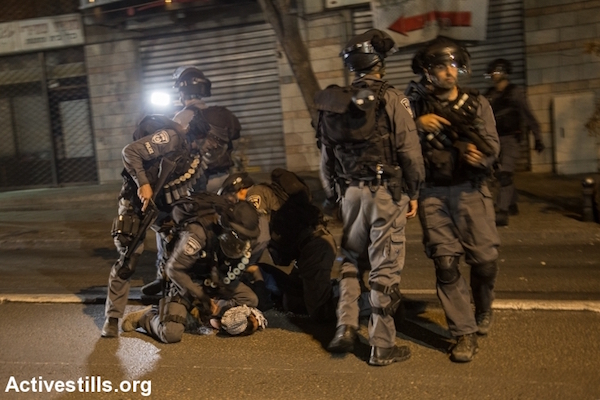 And that’s the ultimate goal, according to Tartour and others — the Israelis want to frighten Palestinian citizens and thus stop them from demonstrating.

Reflecting on her experience, Tartour is troubled by a number of things, particularly the treatment of minors, the court’s role in upholding and extending detentions, and the state’s attempts to depict Palestinian protests as illegal.

When Tartour appeared in court and her detention was extended, Tartour recalls, “The judge said because of what’s happening in the state… they couldn’t interfere with the police’s work. So what is the courts’ job?”

“All protests are permitted and legal,” she adds. “[When] people have to ask for permission [to protest], that’s a worrisome situation.”

Recent weeks have seen a number of demonstrations that the Israeli police have not attempted to prevent or stop: a small number of Jewish Israelis protested the occupation and the escalation in violence; some 15,000 rallied in Tel Aviv for animal rights; twice in Jerusalem, hundreds of right-wing Jewish Israelis marched, chanting slogans like “Death to Arabs.” While on one occasion police prevented the latter from entering the Old City’s Muslim Quarter and arrested four, they did not detain those most of the people involved.

In Haifa, approximately 400 right-wing Jewish Israeli activists attended a protest against Arabs in an area of the city with many Palestinian-owned businesses. Some of the demonstrators wielded sticks. None were arrested.

According to Adalah — The Legal Center for Arab Minority Rights in Israel, between 160 and 200 Palestinian citizens have been arrested before or during protests in recent weeks. Like Tartour, most of those detained have no criminal record. As of Sunday, 40 Palestinian citizens of Israel were still being held.

Sawsan Zaher, a lawyer with Adalah, says that these arrests are illegal. “According to the Israeli law you, cannot arrest a person based on the fact that there is a fear that in the future they might commit a crime,” she explains, adding that stopping people from protesting is a “violation of their constitutional right to freedom of expression.”

It’s not only demonstrators and their family members who are being locked up. Several bus drivers who attempted to transport protesters to Nazareth — but were turned back by police outside of the city — were later arrested and were detained for four days. “Police claimed that the drivers themselves had participated in an ‘illegal’ demonstration,” Zaher says, even though the protest “did not need authorization in the first place” and despite the fact that the buses did not actually reach the protests.

The buses were also impounded. The vehicles were held through the weekend and were then released.

Not only have courts upheld requests to extend activists’ detention, it has, at times, accepted highly questionable “evidence.”

“Judges referred to onions [found with demonstrators] as an indication that the protesters meant for a violent demonstration,” Zaher explains. “We have never seen onions being referred to as a legal defense.” (Editor’s note: Onions are often used to counteract the effects of tear gas.)

Zaher adds that judges have also detained Palestinian citizens based on investigation material that she and other defense attorneys do not have access to. In one case, a minor who doesn’t know Hebrew was being held on the basis of a “testimony that was written in Hebrew” and signed by the child.

Minors’ legal rights are being violated in other ways, as well. According to Israeli law, minors’ parents should be informed and are allowed to be with their child during questioning, children may have a social worker present, and minors should not be interrogated after 10 p.m. Lawyers have seen some or all of these specifications ignored by Israeli authorities during this wave of arrests.

Farah Bayadsi is a lawyer representing a number of activists and minors who were detained. She also says police are preventing detainees from getting the legal counsel they are entitled to, according to Israeli law.

“A police officer intervened when I was giving a 14-year-old teenage [girl] a legal consultation before her interrogation, as [provided for in] the law. The policeman kicked me out of the office and told me that my time was up,” Bayadsi says.

Israeli authorities used similar tactics during the 2014 conflict with Gaza.

For some, recent events are reminiscent of the Israeli military regime that ruled over Palestinian citizens of the state from 1948 until 1966. Shira Robinson, an associate professor of history and international affairs at George Washington University and the author of Citizen Strangers: Palestinians and the birth of Israel’s liberal settler state, remarks, “There were tons of preventive detentions” of Palestinian citizens of Israel between 1948 and 1966. “It was the name of the game.”

She offers the example of Israeli authorities’ attempts to stop commemoration of the Kafr Qassem massacre, which took place in October of 1956. In the days and nights before the anniversary, “Israeli authorities would round up known activists ahead of time. That was standard fare.”

“Military rule [inside the Green Line] was abolished in 1966 but the British emergency regulations in which it was rooted remain on the books today,” Robinson says, adding that the British initially created these regulations in response to riots in colonized India and the Caribbean.

Zaher says that it’s unnecessary to look that far afield. She remarks that the manner in which Israeli police and courts have handled protesters points to a fundamental difference in the way the state treats and views its Palestinian citizens versus its Jewish ones. Ultimately, she says, Israeli authorities treat their own Palestinian citizens similarly to Palestinians in the occupied territories:

The Israeli legal system, Zaher continues, “is based on a perspective of a Palestinian…as an alien. When they are viewed as an enemy and this is anchored in the law then you have the legitimization to do anything.”

A shorter version of this article was originally published on Al Jazeera English.