Israel’s 300 Congolese asylum seekers have been living in the country for well over a decade. Now the Israeli government is trying to deport them back to their home country, considered one of the most dangerous in the world. 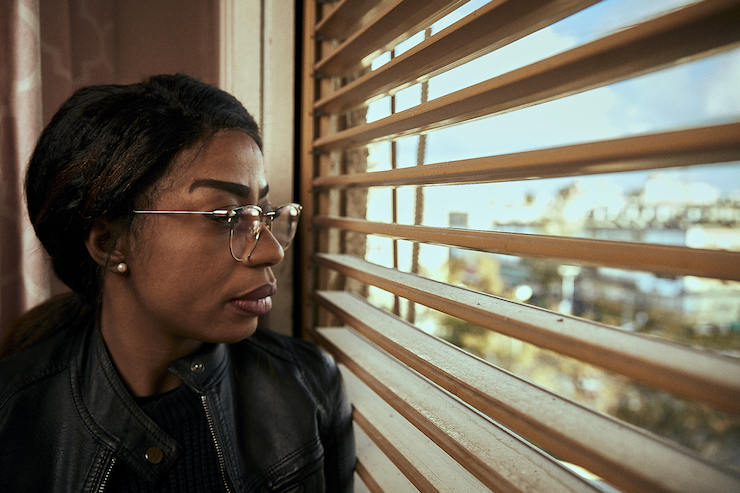 Julie Wabiwa Juliette, a Congolese asylum seeker, seen in her apartment in Holon, just south of Tel Aviv. ‘I am afraid for my life, for my family, and for my kids.’ (Ben Toren)

It was nine years ago that Julie Wabiwa Juliette narrowly fled her home in the Democratic Republic of the Congo for Israel, where she has since built a life. Juliette, 33, married another Congolese refugee, Christian Mutunwa, and together they raise two children. Both Juliette and Mutunwa work, as do all of the approximately 300 Congolese asylum seekers who live in Israel.

The Congolese are legal residents of Israel, with some in the community having lived in the country for 20 years. The majority arrived between 1999 and 2009, during and following the Second Congo war, considered the world’s deadliest crisis since World War II. Until now, the Congolese were protected under a policy referred to by the Interior Ministry as “general temporary protection.” They have B1 visas, which entitles them to live and work in Israel as any other foreign nationals do. Moreover, each of them also has a pending asylum request.

This is in contrast with the much larger population of Sudanese and Eritreans, who are regarded by the government as “illegal infiltrators” and have no legal status.

Now, Israel seeks to deport the Congolese. In October 2018, the Interior Ministry announced that Congolese group protection would terminate on January 5, at which point they would be forced to leave. The decision was made by Interior Minister Aryeh Deri based on an assessment by the Foreign Ministry that there is “no impediment to the expatriation” of Israel’s Congolese population.

Not a single Congolese asylum seeker abided by the state’s deadline. It passed without much fanfare, after which the Interior Ministry issued 10 deportation notices, while rejecting a number of visa renewal applications. The Hotline for Refugees and Migrants, an Israeli NGO that protects the rights of asylum seekers, migrant workers, and victims of human trafficking, successfully appealed to the Jerusalem District Court, which suspended the deportations and forced the state to continue renewing the visas. The Interior Ministry has until February 20 to appeal the court’s decision. 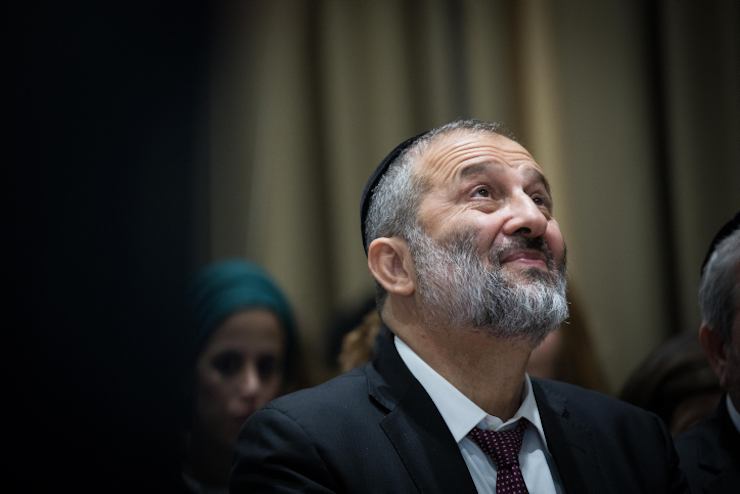 Israeli Minister of Interior Affairs Aryeh Deri. Deri’s ministry has until February 20th to decide whether or not to go ahead with the deportation of Congolese asylum seekers in Israel. (Yonatan Sindel/Flash90)

“The court was on our side and made the state continue to renew visas,” says Shira Abbo, spokesperson for the Hotline. “For now, the Congolese are safe.”

Their future, however, remains uncertain. Sabine Hadad, spokesperson for the Israeli Interior Ministry’s Population and Immigration Authority, confirmed that despite the delays, the ministry has decided to “stop the collective protection for Congolese in Israel.” Hadad says the Interior Ministry will then look into those with open asylum requests; the community will continue to receive work permit visas until an official decision is handed down.

Less than one percent of asylum claimants in Israel receives refugee status, according to Hotline. “Our experience with the Israeli asylum system is not a good one,” says Abbo. “We know that the system is designed to reject everyone.”

A rejection means deportation or staying in Israel illegally like Eritrean and Sudanese asylum seekers. For many in the Congolese community, repatriation is a death sentence. Israel is the only country to revoke protection for its Congolese refugee community.

Julie Wabiwa Juliette tells me about the circumstances in which she left her hometown of Bukavu in the DRC as we sit in her colorful, sparsely decorated apartment in Holon. Her two children, Yonatan, 8, and Joanna, 5, greet me in French, the official language in their parents’ home country, although they also speak Hebrew. They were both born in Israel.

Bukavu, a small city of just under a million inhabitants, is situated on the southern banks of Lake Kivu on Congo’s eastern most border. Remnants of colonialism are apparent even in its skyline. The bright roofs of the more than 100 Art Deco buildings constructed by the Belgians a century ago dot the hillsides. Just a stone’s throw away is Rwanda, on the opposite side of the Ruzizi River.

It is in this otherwise picturesque landscape where much of the conflict that has ravaged the DRC for more than two decades has taken place.

The Congolese eventually bucked the Belgian colonial yolk in 1960 and the Republic of Congo became a sovereign nation. Military dictator Mobutu Sese Seko changed the name to Zaire in 1971. The Central African nation was an American Cold War proxy but floundered following the collapse of the Berlin Wall and subsequent withdrawal of U.S. support.

The First Congo War began two years after the 1994 Rwanda genocide, which precipitated a refugee crisis in eastern Zaire. The 1996 rebellion, backed by a coalition of Central African countries — though primarily fomented by Rwanda — resulted in a new government and a new name, the Democratic Republic of the Congo.

Less than a year later, the Second Congo war erupted. The conflict was so brutal that aid groups deemed sexual violence in DRC to be a “weapon of war.” The war formally concluded in 2003, but in eastern Congo the fighting never stopped. The region is home to the vast majority of the 70 armed groups currently fighting, according to the Africa Center for Strategic Studies.

Juliette left Bukavu in 2009. She was in her third year of university, while working on her final thesis for her bachelor’s degree in sociology, which focused on the reentrance into society by victims of rape.

Juliette’s research was conducted in rural villages that were a couple of hours drive from the city. She worked with a hospital team to collect testimonies from women who were abducted and assaulted during the fighting; many returned pregnant with their attacker’s child. Though the idea of raising the child of the man who raped them is unimaginable, abortion is taboo in rural Congo and carries a high risk of complication.

Many assumed the numerous rebel militias operating in eastern Congo were responsible for the atrocities. Juliette uncovered evidence that a high-ranking local commander of the DRC military gave direct orders to commit mass rape.

“It was too much for me when I come back from the field and I’ve heard all the screams, all the atrocities,” Juliette says. “To stay quiet was not for me.” But in Congo, that is not so simple. “I wanted to tell the truth, but once you talk about something, you must count your days.” 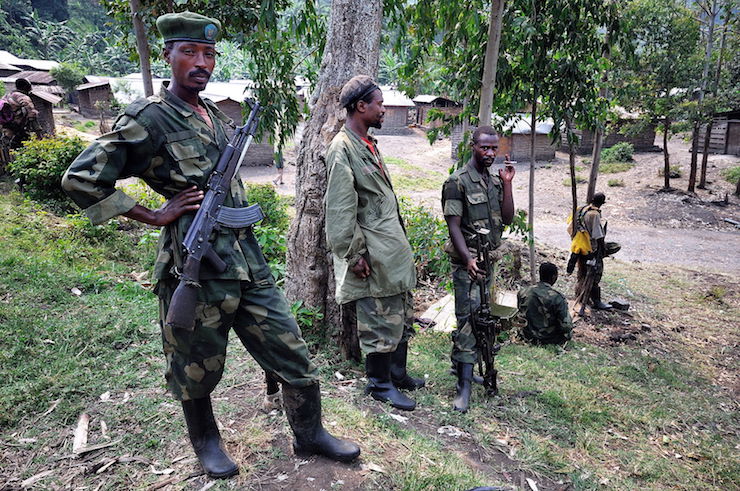 Rebels belonging to the Congolese Revolutionary Army, also known as the M23 Movement, which launched a rebellion against the DRC government in 2012. (Al Jazeera English/CC BY-SA 2.0)

She shared her research with Bruno Koko Chirambiza, a radio journalist at Star Radio in Bukavu, who named the commander, accusing him of orchestrating the rape.

The mere mention of Chirambiza’s name brings tears to Juliette’s eyes. According to the Committee to Protect Journalists, he was murdered by eight assailants on August 24, 2009 at the age of 24. “Many activists, many journalists don’t have long lives in Congo,” Juliette says. According to CPJ, Koko was the third Congolese journalist to be murdered in two years.

Soldiers, who Juliette believes were acting at the behest of the commander named in Chirambiza’s report, searched for Juliette’s at her aunt’s house. She happened to be out of the house when they arrived, so they sexually assaulted her cousin and came back the next morning. Juliette was resolute to remain in DRC and might not have left if were it not for her now-husband.

Juliette and Christian Mutunwa were partners back in DRC. Mutunwa, a human rights activist, fled in 2007, after uniformed police officers who claimed they were from the DRC’s intelligence service, Agence Nationale de Renseignement, came to his home. They wanted to bring him in for “interrogation.”

“I knew if they took me this so-called interrogation process, I would not come back,” Mutunwa says. So he left, spending a few months in Egypt where refugee protection was “nonexistent.” A fellow asylum seeker there told him that there was a democratic country on the other side of the border.

He then went to Israel where he received asylum protection. Mutunwa encouraged Juliette to join him.

Juliette managed to get a visa to go to Israel with a delegation of Christians traveling to the holy land. She didn’t know much about Israel except its importance in Christianity. “We talked about Israel every time in church,” Julie remembers. “We prayed for peace in Israel.” She remained in the country after the delegation returned home, and applied for asylum.

Juliette and Mutunwa are now married and raise their two children in Holon, which, along with neighboring Bat Yam, is where the majority of the Congolese community lives. They support their children by working in Tel Aviv hotels.  Six days a week, Juliette rises before dawn to be at work by 5 a.m., and often won’t return home until late afternoon.

Neither Julietter nor Mutunwa feel integrated into Israeli society. “I’m not a free woman,” says Juliette. “I can’t do what I know I can do.” They yearn for a change in their home country so they can safely return. 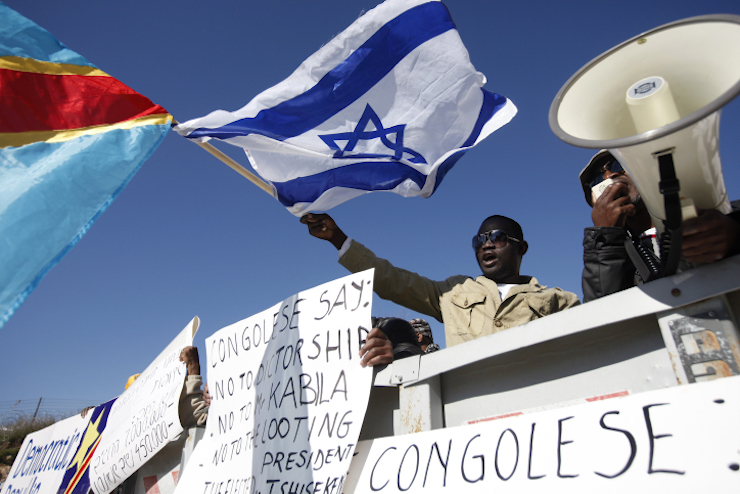 After 18 years of autocracy under Joseph Kabila, DRC elected a new president, Félix Tshisekedi, in December of last year. The Congolese in Israel can only wait and hope he effects true change, and that Israel will give them the time they need to wait for that to happen.

“Home is home,” she explains. “We didn’t come here to stay for life.”

It is unclear why Israeli authorities decided to act now. Human rights organizations speculate that the government wants to flex its muscles following the failed deportation of the Eritreans and Sudanese in the beginning of 2018.

The timing could not be worse. The presidential election has brought about an increase in violence. The political instability, coupled with the second deadliest Ebola outbreak in recorded history, has left the country struggling once again.

Annick Bouvier, spokesperson for the Great Lakes region at the International Committee of the Red Cross, says that 2018 saw a deterioration of the humanitarian situation in eastern Congo “as a result of the fragmentation of armed groups and increased crime.” According to Bouvier, ICRC’s response to the Ebola outbreak has been “temporarily paralyzed” by the violence.

The DRC is also the second worst place to be a woman, according to Amnesty International. “Wherever clashes occur, women find themselves at heightened risk of all forms of violence,” says Joao Martins, Médecins Sans Frontières head of mission for South Kivu in eastern DRC. “This is particularly the case in pockets of conflict across eastern DRC.”

Emilie Serralta, a researcher for Amnesty International in DRC, condemned the government’s response to war crimes perpetrated by state actors as “inadequate.” Amnesty reports that a single high-ranking officer, General Jérôme Kakwavu, has been found guilty of war crimes. He is the exception; the other military commanders, says Serralta, are “untouchable.”

Meanwhile, the commander named by Juliette and Chirambiza has never faced justice for his crimes. In fact, says Juliette, the government promoted him.

“I am afraid for my life, for my family, and for my kids,” says Juliette about the prospect of her deportation. “I don’t see myself going back to a place where I didn’t even have the power to save my own life.”

Ben Toren is a photographer and journalist from New York City.