The Israeli and Egyptian blockade on Gaza has led to ever-rising unemployment, construction skidding to a halt and water is becoming scarcer than ever.

Last week the Palestinian Central Bureau of Statistics published its most recent unemployment data in the West Bank and the Gaza Strip. The unemployment rate in Gaza jumped last quarter and now stands at 40.8 percent. That means that there are currently approximately 180,000 unemployed people in Gaza. That’s a 30 percent jump from this time last year, and the highest since 2009. For the sake of comparison, the unemployment rate in the West Bank hasn’t changed, and stands at 18.2 percent.

According to Gisha, an NGO dedicated to Palestinian freedom of movement, which tracks the limitations on the movement of people and goods in and out of Gaza, one of the most significant contributions to the rise is the near-cessation in the construction industry. That industry was one of the most stable contributors to Gaza’s economy for many years; in its heyday, before Israel put the Strip under blockade, the construction industry employed nearly 70,000 people – half of them directly, while others (such as truck drivers and suppliers) indirectly. At that time, 33 concrete factories were operating in Gaza. Most of them shut their doors and sent their workers home. According to the Palestinian Central Bureau of Statistics, 24,000 people worked in the construction industry in 2013. Today, only 6,800 workers work in the industry. A simple calculation shows that more than 17,000 lost their construction jobs in the past several months.

“With no construction materials, unemployment will only worsen,” says Faysal Shawa, a businessman and vice president of Paltrade, an NGO that works to promote commerce in Palestine. “Thirty or 40 percent of Gaza’s economy depends on construction materials. Give me one sack of cement and I can use it to create jobs for 70 people! When you have cement you need painters, floorers, grippers, plasterers and whatnot. All these professionals are dependent on this sack of cement.” 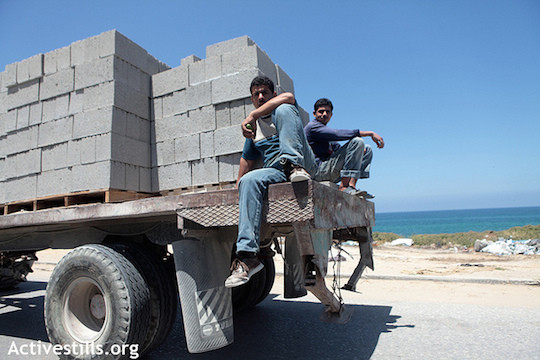 Construction workers in the Gaza Strip (Photo by Anne Paq/Activestills.org)

How does this influence you personally?

“I am a contractor. I’ve built two seven-floor buildings and I cannot finish them. That’s three to four million dollars that I’ve invested, and everything is stuck. I don’t have materials, I don’t have apartments to provide to people who bought them, I can’t pay back bank loans. If you ask me, the real reason for this blockade is that Israel is not interested in our economic development and prosperity. It wants us to be dependent on humanitarian aid. Actually, what Israel tells us is: you have no right to improve your lives, you can only survive – not live. And we come back and ask: why? We want freedom, an end to the occupation and a life of dignity. You all live in heaven, while we are limited in every respect.”

In 2007, shortly after Hamas came to power in Gaza, Israel put the Strip under a blockade that sought to bring its residents to the brink and overthrow the Hamas government. The only thing that somehow kept the economy alive, including the construction industry, was the smuggling tunnel industry, which served as a vital lifeline. The Egyptians turned a blind eye; Israel was furious, but eventually resigned to the situation. Occasionally, Israel exposed these tunnels and blew them up, while hundreds of others operated undisturbed.

The situation allowed successive Israeli governments to keep up their tough appearances vis-a-vis Israel’s citizens by “bringing Gaza to its knees” and vigilantly ensuring security. All the while, however, the government knew that under the surface and away from the cameras, it was business as usual. Whatever couldn’t be moved above ground was moved below it. From raw materials to cars all the way to animals for Gaza’s zoo. Life and its necessities proved to be stronger than any closure.

Following understandings between Israel and Hamas in the wake of Operation Pillar of Defense, Israel allowed, for the first time, the transfer of 20 trucks of gravel a day. Moreover, Israel expanded the amount of three kinds of building materials (gravel, cement and iron) to the Strip through the Kerem Shalom crossing that it would let in to Gaza. Meanwhile, the main inflow of construction materials came through the tunnels.

However, in July 2013, after Egyptian President Morsi was overthrown by the army, the new rulers of Egypt decided to shut down most of the smuggling tunnels. The tunnel economy came to a halt, and the price of commodities and raw materials soared. Shortages were everywhere.

An additional change took place last October. After discovering a cement-reinforced tunnel into Israeli territory, ostensibly for the purposes of an attack, Israel halted the shipment of construction materials into Gaza, both for private companies as well as international organizations. Only in January 2014 did Israel once again allow construction materials for a limited number of large, international projects. The remaining projects, which were in the planning stages, were halted. The money that was raised, the plans that were prepared, professionals that were recruited – everything was frozen. Plans were stuck, procedures were tightened and permits were given sparingly.

In the face of rising frustrations in the Strip and growing international pressure, Israel and Egypt seem as coordinated as ever, while the Palestinians, whose economy is crumbling, are as transparent as ever.

Omar Shaban is the head of Palthink, an independent center for strategic studies in Gaza and an economics expert. The center’s website states that Shaban is trying to open up a public discussion and create a broad consensus on the importance of preserving the welfare of the Palestinians and all residents of the region. In a phone conversation, he said the following:

“Sixty percent of Gaza’s population is made up of young people under 25. They have no jobs or freedom of movement outside of Gaza, they are dependent on foreign aid for their basic necessities. This causes more radicalization in Gaza. People who have nothing to lose turn to extremism. When will you understand that the blockade is not only bad for Palestinians, it’s bad for the stability of the entire region? People here are punished for no reason.

What does it look like on a day-to-day basis?

“If you walk around Gaza, you’ll see lots of unemployed people walking around helplessly. We turned to the Israeli government and the media during the first days of the blockade and explained the situation: there are nearly 2 million people living in a crowded and dense piece of land. There aren’t enough houses. Twenty thousand new couples get married and 15,000 finish their university studies every year.”

How do you respond to Israel’s claim that the restrictions were put in place to prevent Hamas from using building materials for military purposes?

“It’s simply untrue. Who was harmed in 2007 when Israel placed us under blockade? As you know, Hamas got what it wanted from the tunnels. Regardless, Hamas is not interested in an escalation. We’re all interested in creating more jobs. And what do Israelis want? If you really want peace, why do you prevent peace and sabotage the Palestinian people’s attempts at creating a unity government?

“I suggest the Israeli government re-think its policy vis-a-vis Gaza. It needs to find a different formula that allows construction material for use among civilians.

Mahmud Sulyman is a 29-year-old entrepreneur with a master’s degree in engineering from the Islamic University of Gaza. Now, he is unemployed.

“I chose to study water engineering because the water situation here is not good. We suffer from a lack of drinking water, poor water quality and an penetration of sea water into our groundwater. I want to help change my society in this respect.

“This coming summer, nearly 20,000 people will suffer from a lack of drinking water. Our money goes nowhere. I am still trying to save what is possible and acquire new materials.

“Politics doesn’t interest the common person. We need materials. I’m not talking about politics, I’m talking about people. You are all welcome to visit and see how we’re living here.”