Approximately 30 Palestinians, Israelis, and internationals gathered at the edge of Shu’fat refugee camp on Sunday to protest a new Israeli checkpoint, which opened on December 12 and that an Israeli activist likened to a form of “ethnic cleansing.” Palestinian kids threw stones; Israeli police fired rubber-coated bullets at the children. 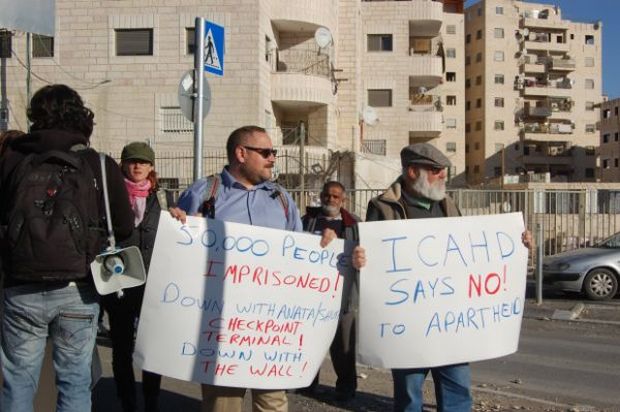 A number of local Palestinian activists were reportedly arrested prior to the demonstration.

The small group of protesters stood in the roundabout closest to the new checkpoint, holding signs and giving speeches. Israeli police approached and asked the group to move 20 meters back because the protesters were “bothering” them. The demonstrators responded that the checkpoint bothered them and refused to move.

After a tense stand-off, the police left and the protest continued.

“This [checkpoint] has nothing what so ever to do with security,” Jeff Halper, a co-founder of the Israeli Commitee Against House Demolitions, said. “There are Palestinians on both sides of the border. [The checkpoint] has one purpose–to concentrate 50,000 Palestinians on one side of the [separation] wall so their residency can eventually be revoked.”

Shu’fat refugee camp was founded by Jordan in 1966. Today, it is home to approximately 50,000 Palestinians. It is located in the eastern part of the city and falls inside of Israeli-drawn municpality lines.

Many of the residents hold Jerusalem residency. But to keep this status, they must prove that Jerusalem remains the “center” of their life. According to activists, the checkpoint–which separates one area of Jerusalem from another, impeding freedom of movement–makes this already difficult task more difficult. Scores of Palestinian residents of Jerusalem lose their residency rights every year; 2008 marked an all-time high, with the Israeli government stripping over 4000 Palestinians of their status. Between 1967 and 2010, Israel revoked the residency of over 13,000 Palestinian Jerusalemites.

Jaber Mouheisen, head of the Shu’fat’s Popular Committee, called the checkpoint illegal. “We carry Israeli ID cards…This is our right to live here and move freely.”

He added that the occupation would fall “sooner or later.”

As the protest dispersed, small children threw stones towards the checkpoint. Israeli police fired rubber-coated bullets. After the kids continued, police entered the refugee camp with their weapons drawn. Israeli protesters appealed to them to leave, saying their presence and their weapons were a provocation. The police retreated to the roundabout near the checkpoint.

When asked via email about the purpose of the new checkpoint at Shu’fat refugee camp and whether it was intended to separate Jerusalem residents from other areas of the city, Israeli officials did not respond.