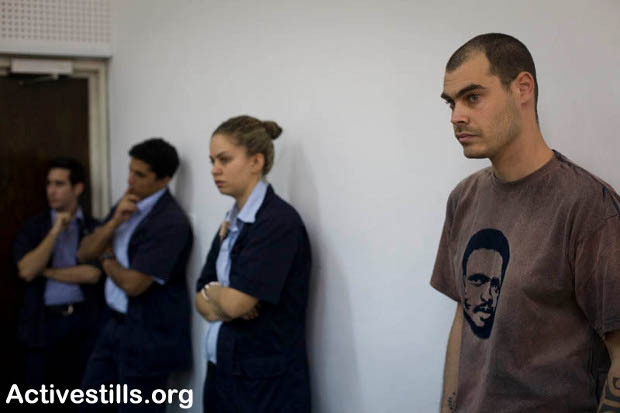 Of all the criminals involved with the 2008 Gaza war, an Israeli leftist will be going to jail for riding his bike against the war in Tel Aviv. Tel Aviv Magistrates court judge Yitzhak Yitzhak convicted Israeli leftist Jonathan Pollak of illegal assembly for his participation in a January 2008 Critical Mass ride against the siege on Gaza and then sentenced him to three months imprisonment that will begin on January 11th, 2011. Pollak was the only one detained at the said protest, and was accused of doing nothing other than riding his bicycle in the same manner as the rest of the protesters. The conviction activates an older three-month suspended sentence imposed on Pollak in a previous trial for protesting the construction of the Separation Barrier. An additional three month prison term was also imposed for the current conviction, which will be served concurrently. His imprisonment is part of a clear strategy of silencing dissent in the Israeli left.

Jonathan Pollak is one of the founders of the Israeli leftist group “Anarchists Against the Wall“, which join weekly unarmed Palestinian protests throughout the West Bank against the Separation Wall and the Occupation. Since 2008, he has served the media coordinator of the Popular Struggle Coordination Committee, an Palestinian umbrella organization designed to garner media attention for the unarmed struggle in the West Bank. On his conviction, Pollak argued for his sentence, saying “I find myself unable to express remorse in this case … If His Honor decides to go ahead and impose my suspended prison sentence, I will go to prison wholeheartedly and with my head held high. It will be the justice system itself, I believe, that ought to lower its eyes in the face of the suffering inflicted on Gaza’s inhabitants, just like it lowers its eyes and averts its vision each and every day when faced with the realities of the occupation.”

On January 31, 2008, some thrity Israeli protesters participated in a Critical Mass bicycle ride through the streets of Tel Aviv against the siege on Gaza. During the protest, Pollak was arrested by plain-clothes police who recognized him from previous protests and because, as claimed in court, they assumed he was the organizer and figurehead of the event. The protest was allowed to continue undisturbed after Pollak’s arrest and ended with no further incidents or detentions.

The arrest and subsequent indictment appears to be the result of police vindictiveness, rather than of Pollak’s behavior at the time of the event; Pollak was but one in a group of protesters who behaved exactly like him, yet he was the only one to be singled out. Moreover, environmental Critical Mass events take place in Tel Aviv on a regular basis, but have never been met with such a response. Other protests, which have caused far more severe obstruction of traffic (e.g. the motorcade protest of thousands of motorcycles) did not result in arrests, and surely did not lead to the filing of criminal charges and imprisonment.

According to Pollak’s lawyer, Adv. Gaby Lasky, “The police not only singled out Pollak from a crowd of people who all did exactly as he did, but also singled out the entire protest for no reason other than its political alignment. Similar events regularly take place in Tel Aviv without police intervention, let alone arrests and indictments.”

During the trial, an Israeli supporter of Pollak was violently removed from the courthouse for wearing a shirt that said “there is no pride in occupation.” After the verdict was handed down, supporters began chanting in the courtroom against Israeli fascism and the occupation. They were forcibly removed one by one from the courthouse and subsequently held a demonstration on the sidewalk.

Despite evidence of Israeli wrongdoing in the course of the Gaza war, the only Israeli sentenced to jail so far is a leftist who choose to ride his bike through Tel Aviv in non-violent protest. The state of Israel sent a clear message with this verdict: that it will not tolerate dissent from the left. In fact, the state persecutor asked for a severe sentence in order to ‘make an example out of Pollak and those who engage in similar anti-occupation work.” Pollak said that he will continue to work with Palestinians against the occupation and repeatedly cited the much harsher verdicts given to Palestinians involved in non-violent protests. The only remorse that he showed was that he did not do enough to express dissent about the siege of Gaza. If peacefully riding a bike against violent aggression is a crime, Pollak said that we will happily go to jail. The fragility of Israeli democracy is on full display when one of its privileged sons can’t even ride a bike in protest of an aggressive and violent war on a besieged people.