Israeli, Palestinian and international legal experts recently testified at the Russell Tribunal in South Africa, which convened to determine whether to classify Israel’s policies towards the Palestinians as apartheid. This is what the Tribunal found. 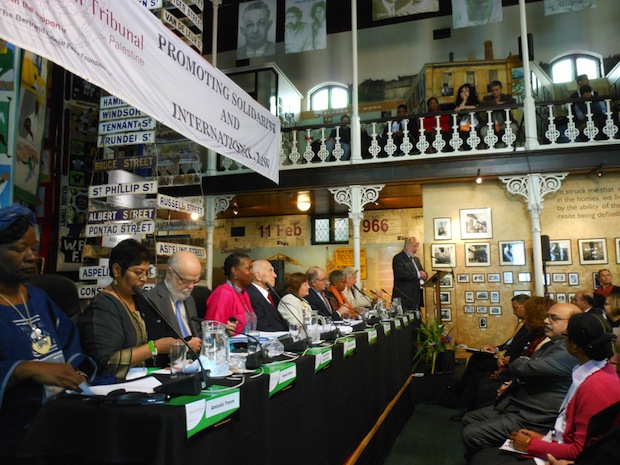 The Russell Tribunal is what happens when governments abrogate their responsibilities towards their own citizens and peoples under their control. States, along with the United Nations, are obligated to enforce international law and human rights conventions. When they don’t, as in their failure to apply to Israel and its Occupation the International Convention on the Suppression and Punishment of the Crime of Apartheid, the people themselves must rise up and demand that they do. Civil society forums such as the Russell Tribunal may not carry formal authority, but they represent millions of people the world over who believe that simply leaving governments free to pursue their narrow agendas driven by power, sectarian ideology, militarism and the profits of a few is to doom us all to continued war, bloodshed and injustice.

In the late 1960s, the philosophers Bertrand Russell and Jean Paul Sartre convened a Russell Tribunal on Vietnam. In the mid-1970s a Tribunal was also convened on the issue of human right abuses in Latin America. Over the past year, the Tribunal has been convened once again, this time on the issue of Palestine. Along with other Israeli, Palestinian and international legal experts – human rights workers and activists – I testified at the session just recently held in Cape Town, South Africa. The setting was appropriate, as the Tribunal asked whether, in light of international law, Israel’s policies towards the Palestinians can be classified as apartheid, thereby holding Israel accountable for its policies, including through international sanctions.

The Russell Tribunal is not a court – or rather, it is a people’s court. Although prominent legal experts sit on the jury, such as Michael Mansfield, QC, and José Antonio Martin Pallin, a former Spanish Supreme Court justice, leading political figures do as well. Stephen Hessels, for example, is a Holocaust survivor, former French diplomat and an author of the Universal Declaration of Human Rights. Ronnie Kasrils, a Jewish member of the African National Congress, was a former member of the post-apartheid South African government. Other jurists with what might be called moral authority included Mairead Maguire, recipient of the Nobel Peace Prize for her work in Northern Ireland, the African-American author Alice Walker and Yasmin Sooka, a member of South Africa’s truth and Reconciliation Committee. The Tribunal opened with greetings from Archbishop Desmond Tutu.

Representing civil society rather than governments, the authority of the Tribunal is indeed only moral and intellectual. It does not judge governments. Instead, it sets out before world public opinion gross violations of human rights and international law, hoping in that way to mobilize grassroots opposition that, in turn, will influence how governments behave. The Tribunal met, fittingly, at the District Six Museum, which commemorates the destruction and dispersal of Cape Town’s multi-cultural District Six community by the apartheid government.

In the case of the Israel’s 44-year Occupation, such an initiative is certainly called for. Despite the Palestinians’ acceptance of the two-state solution in 1988 and the Arab Peace Initiative of 2002, in which the Arab League unanimously agreed to make peace with Israel and integrate it into the region, Israel refuses to end its settlement building or the construction of other massive, irreversible “facts on the ground,” such as a web of Israeli-only highways linking the settlements to Israel proper; the construction of a “separation barrier” twice as high as the Berlin Wall and five times longer, snaking deep into Palestinian territory; and the annexation of East Jerusalem.

Indeed, it is likely that Israel’s facts on the ground have eliminated the two-state solution. Israel however, which considers the West Bank as “Judea and Samaria” – an integral part of its territory – will not even contemplate a one-state solution. It is the permanent confining of the Palestinian population to tiny enclaves in the Occupied Territory under institutionalized Israeli domination and control that leads to the charge that Israel has constructed an apartheid regime. And since, as many expert witnesses testified before the Tribunal, the human and national rights of Palestinian citizens of Israel are also limited by law, regulations and a hostile political and social climate, the reality of apartheid extends inside Israel itself.

The “crime of apartheid” is defined in international law as “inhuman acts committed for the purpose of establishing and maintaining domination by one racial group of persons over any other racial group of persons and systematically oppressing them” – “racial group” being extended to “any distinction, exclusion, restriction or preference based on race, color, descent, national or ethnic origin.” The Tribunal took the four Articles of the Convention Against the Crime of Apartheid and invited expert witnesses to systematically address them. (The Israeli government was invited to submit testimony as well but did not deign to even acknowledge the offer.)

The two days of testimony highlighted the systematic oppression of the Palestinians. Some of the details – of restrictions on life and movement in the Jordan Valley, for instance, or the extent of Israel’s security services in vetting teachers and principals in Arab public schools inside Israel – surprised and shocked even witnesses who had worked for years in the field. My own testimony on house demolitions revealed that three times more homes are demolished inside Israel (all of Arab citizens, of course) than in the Occupied Territory.

In the end, the jury found ample grounds to conclude that “Israel subjects the Palestinian people to an institutionalised regime of domination amounting to apartheid as defined under international law…. The Palestinians living under colonial military rule in the occupied Palestinian territory are subject to a particularly aggravated form of apartheid. Palestinian citizens of Israel, while entitled to vote, are not part of the Jewish nation as defined by Israeli law and are therefore excluded from the benefits of Jewish nationality and subject to systematic discrimination across the broad spectrum of recognised human rights. Irrespective of such differences, the Tribunal concludes that Israel’s rule over the Palestinian people, wherever they reside, collectively amounts to a single integrated regime of apartheid.” The Russell Tribunal calls on all the relevant actors – the state of Israel, the international community and civil society itself – to end apartheid in Israel/Palestine and pave the way for a just peace between the Palestinian and Israeli peoples.

Jeff Halper is the Director of the Israeli Committee Against House Demolitions. He can be reached here.