Yesterday (Tuesday June 26) was International Day in Support of Victims of Torture. The Public Committee Against Torture in Israel (PCATI) organized an action in the public sphere to remind and demonstrate to Israelis that the state engages in daily acts of torture against Palestinian detainees. 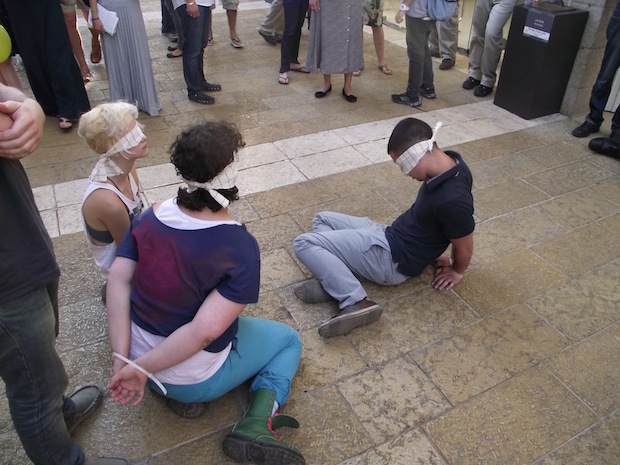 Despite a 1999 High Court ruling outlawing torture and forbidding the use of a number of methods of interrogation, and in violation of the International Convention against Torture (ICAT, of which Israeli is a signatory), a recent report reveals that 100% of Palestinian prisoners in Israeli jails suffer psychological, mental and physical abuse and torture. The most vulnerable group is Palestinian minors, who, as a new report concludes, suffer “cruel, inhuman and degrading treatment.”  According to another recent report, in the last decade, Israel has detained and prosecuted a staggering number of 7000 Palestinian children, some as young as 12 who are subjected to “systematic treatment of ill-treatment, and in some cases torture.”

A group of 15 activists, led by conscientious objector and PCATI volunteer Noam Gur, took to the Mamilla shopping centre in Jerusalem for a creative street performance. Staged in the midst of heavy pedestrian traffic busy shopping, one small group was perched on the floor, bound and gagged. Another two young women sat inside circles made of police lines, their body language reflecting the misery and despair of prisoners held within confined spaces.

The main attraction was a display of an “interrogation” of a Palestinian teen, arrested for allegedly hurling stones during a demonstration. The “teen” was lying on the floor, bound and blindfolded, periodically abused by an ‘interrogator’ who constantly questioned and taunted him, turning up the volume on a boombox playing white noise. “Did you throw stones?” he kept screaming at him. “Did you participate in the demonstration?” “Repeat after me: I threw stones at the demonstration.” “I didn’t do it,” screamed the terrified “teen” at the top of his lungs, “I didn’t,” and then, almost breathless, repeatedly: “I am human.” 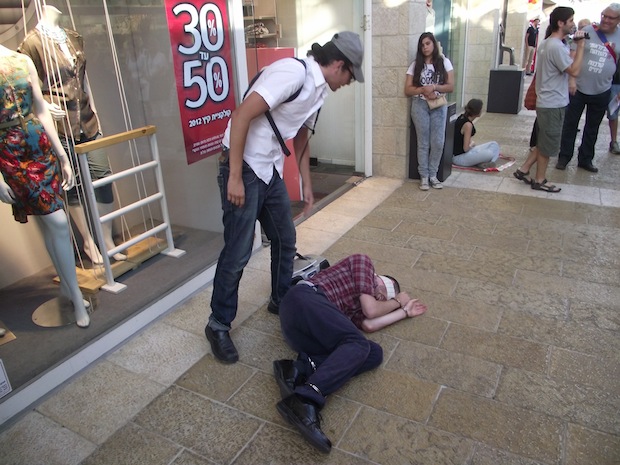 Random passersby seemed at first shocked. A few even believed they were witnessing a real arrest and interrogation. Many who realized the purpose of the performance were outright hostile: “But what about Gilad Shalit when he was in Hamas’ captivity?” asked one. “Assholes. Bastards. Traitors,” yelled another. A shopkeeper threatened participants with violence, then called mall security guards who in turn called the police. A few  Border Police officers showed up, but did not intervene and let the activists complete their performance and hand out leaflets to shoppers. We were only asked to avoid touching shops’ windows or the decorative statues and refrain from blocking the flow of people.

Noam Gur explains that the action was designed to raise awareness about the existence of torture of Palestinians in the hands of Israeli authorities. “This day is significant, but most people are not aware of it. By getting in people’s faces, we succeeded in raising awareness, even if many disagreed with us or even reacted with hostility.” Moriel Rothman, who channeled the 17-year-old Palestinian detainee, explained that the purpose of the action was to break the silence around the practice of torture in Israel. His simulation of torture brought it home for him:

It was much scarier than I expected it would be. At one point I was actually really thirsty from screaming, the ‘white noise’ was beginning to really disturb me, my binds hurt, and I couldn’t see anything. But I was merely performing. It emphasized for me how privileged I am as an Israeli Jew, that I do not have to live with the fear of being tortured, even if I were to be arrested. On the other hand, torture is part of everyday reality for Palestinians. It destroys bodies and souls. It is meant to dehumanize them.

He concludes that although he objected to torture before, the experience motivated him to become even more outspoken about it.