After nearly a week of intense ceasefire negotiations, the truce between Israel and Hamas broke down Tuesday afternoon. At approximately 3:45 p.m. two rockets launched from the Gaza Strip exploded near Be’er Sheva, prompting Prime Minister Netanyahu and Defense Minister Ya’alon to order the Israeli military to respond, while also calling on the Israeli delegation to negotiations in Cairo to return to Israel.

The Israeli Air Force struck targets across Gaza Tuesday, killing a three-year-old girl and an unidentified woman after Israeli missiles hit the al-Dalou family home in Gaza City’s Sheikh Radwan neighborhood. Palestinians fled their homes in Khan Younis to the south of the Gaza Strip, Beit Hanoun to the north, and from the Shujaiyeh neighborhood of Gaza City. According to Ma’an News Agency, ambulance crews and medics were searching for bodies among the rubble of the three-story home, which was reportedly hit by five missiles. Twelve Palestinians were killed in 2012 when Israel targeted the same home during Operation Pillar of Defense.

According to Reuters, Hamas official Mousa Abu Marzuk said Tuesday night that the strike on the al-Dalou home was an attempt to assassinate Muhammad Deif, the head of the Al-Qassam Brigades in Gaza. 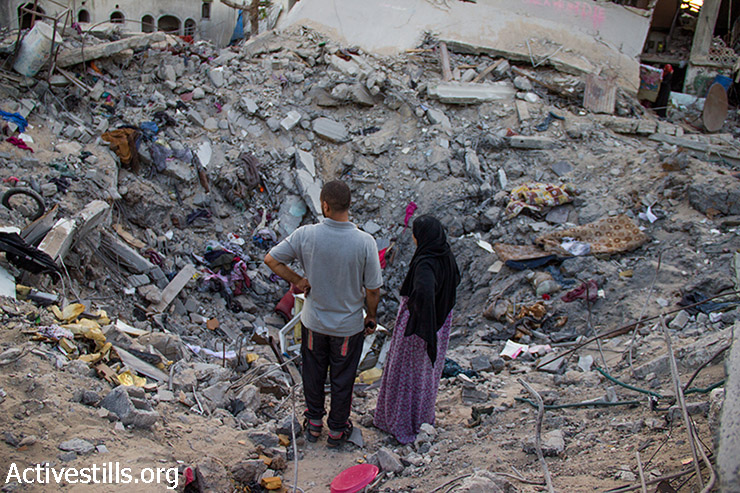 Meanwhile, rockets fired from the Strip exploded in both southern Israel and the Tel Aviv area throughout the afternoon and evening.

According to Haaretz, a top Israeli official said that the collapse of the truce talks in Cairo followed two days of intensive negotiations. According to the official, the gaps between the sides remained significant, and the Egyptian efforts were only meant to delay the inevitable breakdown. Meanwhile, Hamas spokesman in Gaza Sami Abu Zuhri denied the group had fired the rockets at Israeli territory, accusing Israel of trying to sabotage truce talks in Cairo. “Israel’s foot-dragging proves it has no will to reach a truce deal,” said Abu Zuhri, adding that “the Palestinian factions are ready for any scenario.”

Operation Protective Edge has so far claimed over 2,000 Palestinian lives and 67 Israeli lives, the vast majority of whom were soldiers killed during the ground invasion of Gaza.