Israeli military kills 58 Palestinians and wounds over 2,700 others in Gaza. Palestinians and Israelis across the West Bank protest in solidarity with Gaza and against the U.S. embassy move to Jerusalem. 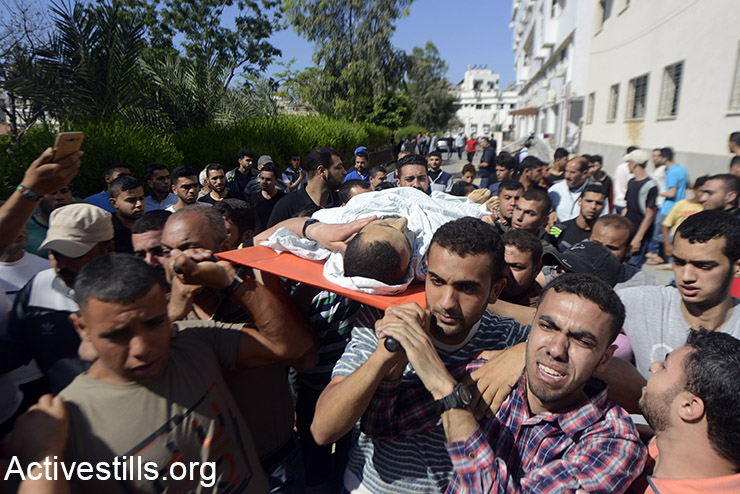 Palestinians hold a funeral for a Palestinian shot dead by Israeli snipers during the ‘Great Return March’ protest on the Gaza border, May 14, 2018. (Mohammed Zaanoun/Activestills.org)

At time of publication, 58 Palestinians had been killed and 2,771 wounded by Israeli military forces during demonstrations on the border with Gaza on Monday, according to the Gaza Health Ministry. This was the single bloodiest day in Gaza since the 2014 war.

The violence took place at the culmination of the “Great Return March,” a 45-day protest in which tens of thousands of Palestinians have marched toward the border fence to call for an end of the 11-year-long siege on the Strip and the return of Palestinian refugees to their homes and land.

Monday’s protest marked Nakba Day, which commemorates the expulsion of 700,000 Palestinians during the 1948 war.  A total of 107 Palestinians, including 12 minors, have been killed by Israeli forces since the Great Return March began on March 30. An Israeli soldier was also lightly wounded on Monday, and was taken to hospital for treatment, the first Israeli casualty reported to date. (Reason for casualty unclear, although presumably from a rock.)

Following the violence, the UN High Commissioner for Human Rights stated that “the right to life must be respected. Those responsible for outrageous human rights violations must be held to account. The international community needs to ensure justice for victims.” Meanwhile UN Secretary General Antonio Gutteres expressed his profound alarm at the “sharp escalation of violence” and the “high number of Palestinians killed and injured in the Gaza protests.” 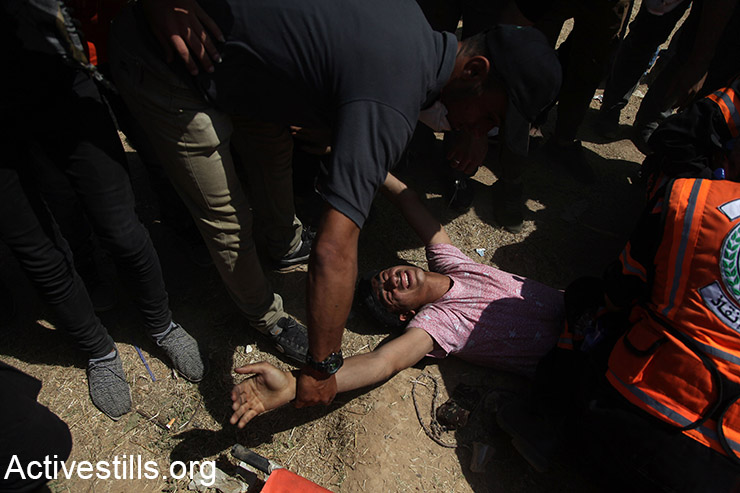 Medics help a wounded Palestinian during demonstrations on the Gaza border, May 14, 2018. (Mohammed Zaanoun/Activestills.org) 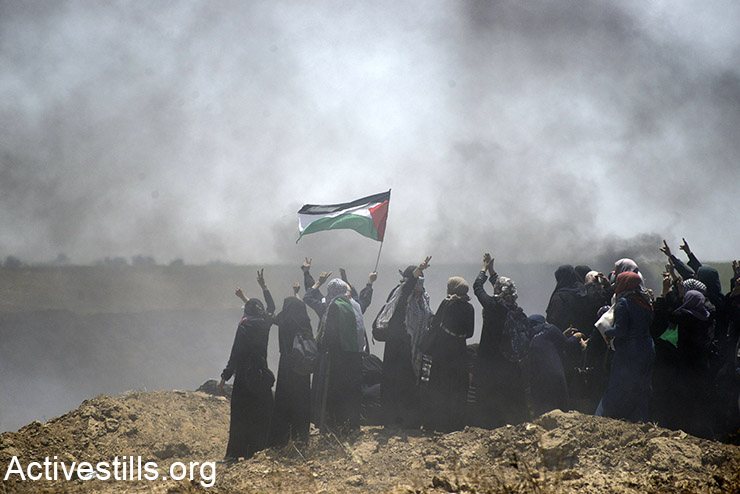 A group of Palestinian women demonstrate during a protest on the Gaza border, May 14, 2018. (Mohammed Zaanoun/Activestills.org)

According to Israeli authorities, the IDF used force to respond to attempts to breach the fence. It claims three of those killed on Monday were trying to plant explosives along the fence in Rafah. In addition, 35 fires erupted on the Israeli side, allegedly due to kites carrying incendiary materials from Gaza.

Meanwhile, thousands of Palestinians protested across the West Bank, Jerusalem, and Israel in solidarity with Gaza and against the official opening of the U.S. Embassy in Jerusalem, which also took place on Monday, and ahead of Nakba Day, which is on Tuesday.

In West Jerusalem, hundreds of Palestinians demonstrated outside the new embassy, located in the Arnona neighborhood. According to +972’s Orly Noy, police ripped up signs, confiscated Palestinian flags, and prevented journalists approaching. Knesset members Jamal Zahalka and Masud Ghnaim, both from the Joint List, were manhandled by police officers. A total of 14 people were arrested. On Monday night, over 100 Israeli activists held signs and chanted slogans in solidarity with Gaza and against the killings outside the Prime Minister’s Residence in Jerusalem.

Hundreds of Palestinians also protested at Qalandiya checkpoint, outside Jerusalem, where demonstrators released Palestinian flags attached to balloons. According to Palestinian reports, 33 were wounded by tear gas and rubber bullets in clashes between stone throwers and Israeli troops. In Bethlehem, hundreds participated in a demonstration before clashes broke out with Israeli security forces. Protests also took place in Nablus and Jericho. 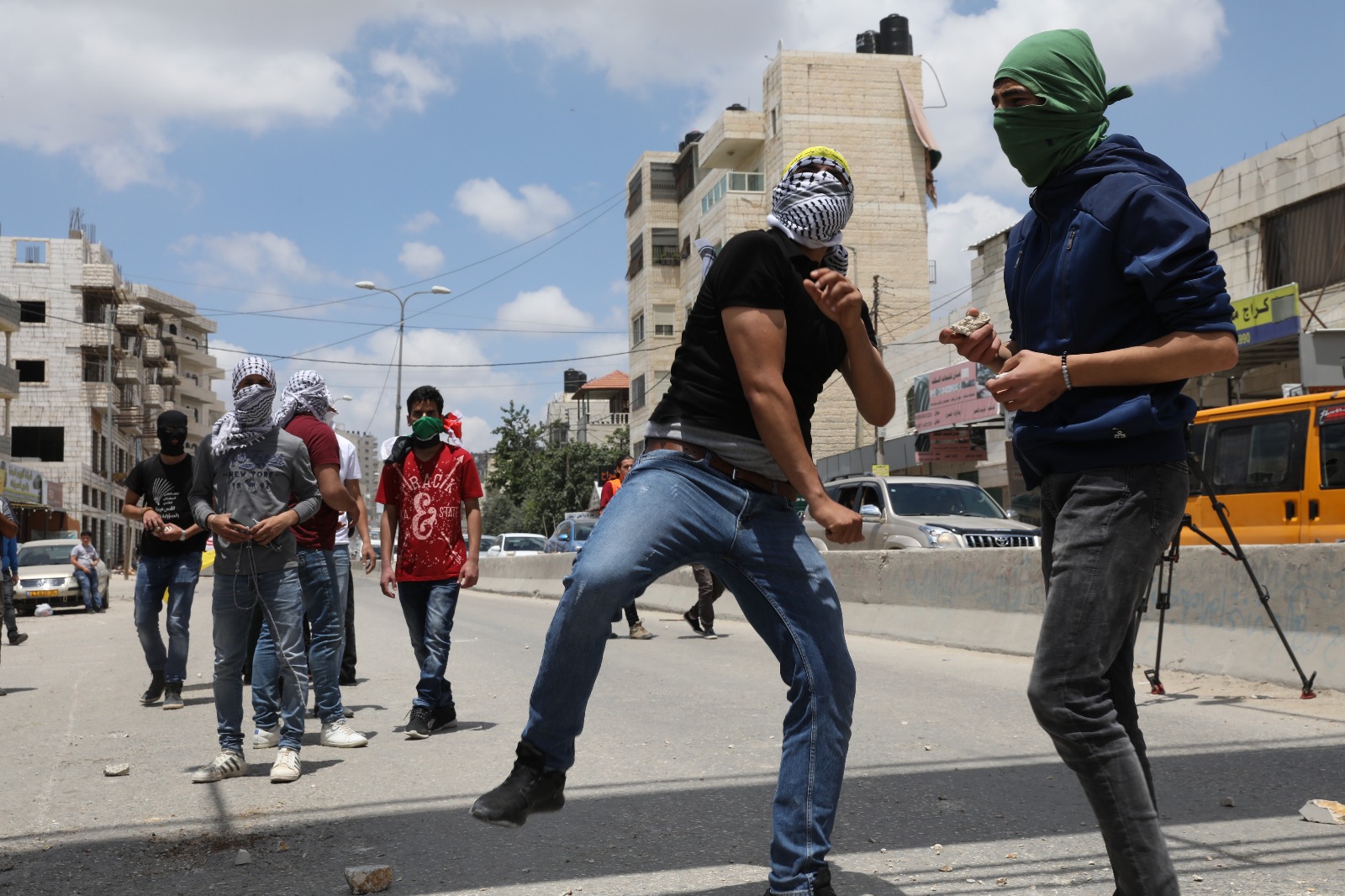 Palestinians throw stones at Israeli soldiers during clashes at Qalandiya checkpoint, near Jerusalem, May 14, 2018. (Oren Ziv/Activestills.org) 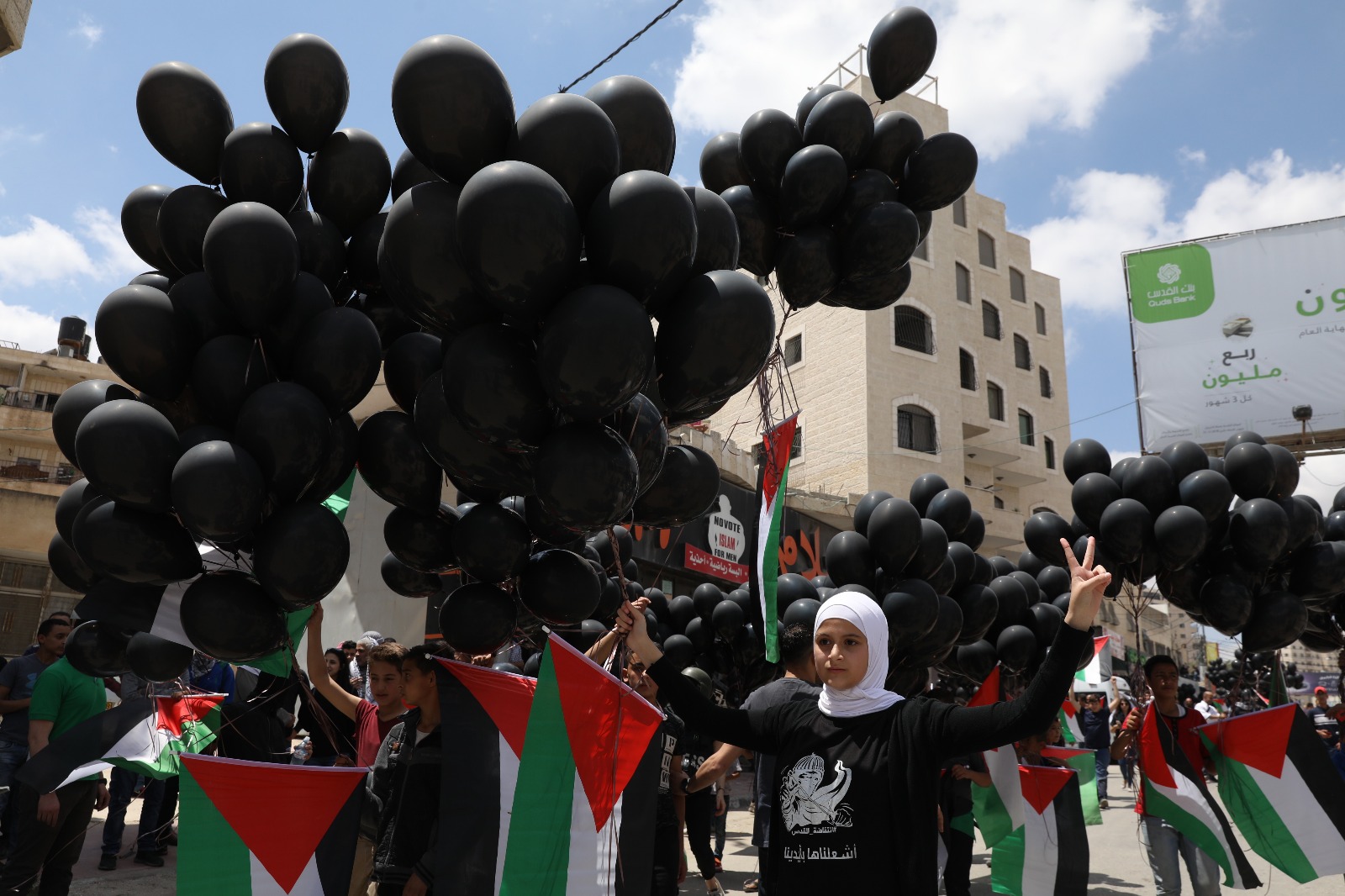 Palestinians in Qalandiya checkpoint fly Palestinian flags attached to balloons, in solidarity with Gaza and against the opening of the new U.S. embassy in Jerusalem, May 14, 2018. (Oren Ziv/Activestills.org)

Also on Monday, South Africa recalled its ambassador to Israel until further notice, in protest of the violence in Gaza. “The South African government condemns in the strongest terms possible the latest act of violent aggression carried out by Israeli armed forces along the Gaza border‚ which has led to the deaths of over 40 civilians‚” said a statement from the country’s Department of International Relations and Cooperation.

Meanwhile, Turkey also recalled its ambassadors to the United States and Israel to protest of the Trump administration’s decision to move the U.S. embassy from Tel Aviv to Jerusalem.