Rushdi Tamimi, 31, was shot by Israeli soldiers during a protest in Nabi Saleh on Saturday; he died today in a Ramallah hospital. 22-year-old Hamdi Falah died today after being shot four times by soldiers at a Hebron protest. In the past several days, Israeli forces have violently repressed demonstrations in East Jerusalem and the West Bank against the army’s ‘Operation Pillar of Defense.’ 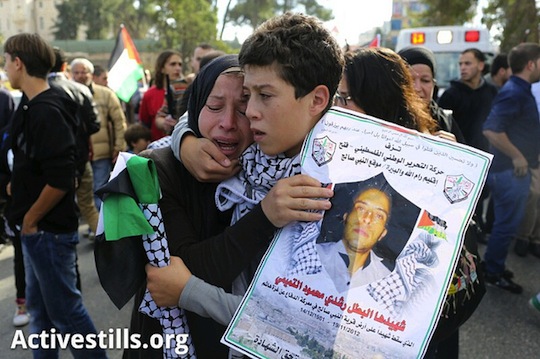 Abir Kopty of the Popular Struggle Coordination Committee reported that protests held on Saturday and Sunday at Nabi Saleh, Ofer Military Prison, Hebron, Nablus, Jenin, and Bethlehem were put down through the use of tear gas, rubber bullets, and rubber-coated bullets, with soldiers sometimes firing directly at demonstrators. More than 10 protesters were arrested and a number were injured, including Tamimi, who was shot in the back with live ammunition. According to Kopty, “While injured, soldiers dragged him attempting to detain him.”

Tamimi was taken to a hospital in Ramallah where he died of his injuries today.

Falah was protesting the Israeli assault on Gaza when soldiers shot him in the face, chest, and knee. According to Maan News Agency, witnesses reported that Falah “was shot at close range.”

For the second day in a row, Israeli soldiers fired tire gas at unarmed students of Al Quds University in Abu Dis in the West Bank in an attempt to suppress protests against the assault on Gaza.

A 19-year-old student told +972 that as she was leaving campus yesterday around 4:00 p.m., she saw little kids throwing stones at Israeli soldiers. One of the college students also threw a rock in the soldiers’ direction, she said, as a form of protest of the Israeli assault on Gaza that has killed over 100 Palestinians. The soldiers shot tear gas at the children and the student and then ran towards a crowd of university students, pushing them into campus, where they continued to fire tear gas at them.

The student reported that she and dozens of other students hid in a building as they did not want to confront the soldiers. One of her friends fainted from tear gas inhalation.

A professor told +972 that as he fled campus yesterday afternoon, he saw one student, “lying down and twitching.” Another student was bleeding from his head.

Abu Dis is located in the West Bank Area B, which is under the administration of the Palestinian Authority with Israel maintaining control over security.

According to Maan News Agency, more than 50 protesters were injured today during demonstrations held in East Jerusalem and the West Bank against Israel’s “Operation Pillar of Defense.” Israeli soldiers suppressed the protests with sound bombs, tear gas, and rubber-coated bullets. At least a dozen demonstrators were arrested today.